Although Archduke Franz Ferdinand, heir to the Austro-Hungarian Empire, was unpopular, his assassination by Serbian nationalists on June 28, 1914 was the spark that started WWI. Germany supported Austria against Serbia, its patron Russia, and Russia’s ally France. Britain joined France and Russia when Germany refused to guarantee the neutrality of Belgium. While most of the German army fought Britain, Belgium and France in the west, a German army and the Austro-Hungarian Army faced Russia in the east. When WWI started, the size of the German army and its strategy of marching through Belgium instead of a direct offensive against France took the French and the British by surprise. The German army had nearly reached Paris when a counter-attack caught it over-extended and it was forced to retreat. After a month and a half of desperate fighting, the Allies and the Germans built lines of fortifications that stretched across Europe from Switzerland to the Belgian coast. These lines would change little during the next four years. Hoping to starve Britain and achieve victory, Germany unleashed its U-boats against all shipping, both neutral and Allied, driving the United States to abandon its neutrality and enter the war on the side of the Allies. 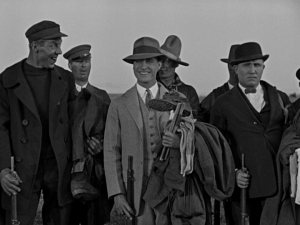 When the United States enters WWI, men rush to join the army. The lazy son of a rich man, Jim (John Gilbert) initially laughs at the idea until his friends enlist, and he ends up in a platoon with construction worker Slim (Karl Dane) and bartender Bull (Tom O’Brien). After training, they are sent to France, where they are billeted on a farm, and Jim falls for the farmer’s daughter Melisande (Renee Adoree). After a moderately brief courtship, they become a couple and he teaches her how to chew gum. All is going well until Jim receives a letter from his girlfriend, and Melisande discovers that he is engaged. The unit is soon sent to the front, but she catches him just in time to say goodbye. The recruits’ first battle is brutal. After artillery fire and a gas attack, there is fierce hand-to-hand combat, and Jim is the sole survivor among his friends. Released from the hospital, Jim searches for Melisande but discovers that the farmhouse has repeatedly changed hands, and Melisande is now a refugee. When the war ends, Jim returns home. Unknown to him, his fiancee (Claire Adams) is having an affair with his older brother, who stayed home. When Jim confesses to his mother that there is a girl in France, she tells him to find her. 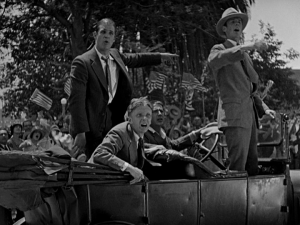 The title card states: “In 1917, America was a nation occupied in peaceful progress,” and the camera pans over mills, factories and construction. The movie is correct that the American economy was booming, but fails to explain that it was booming because it supplied the Allied war machine, to the bitter frustration of the Central Powers, since the United States had even extended credit to the Allies, even though it claimed to be neutral.

There is not much historical context but the script shows that there was a rush to enlist at the start of the war. Since the American army had rapidly expanded from a small peacetime army, the first few divisions spent a fair amount of time in France before they were considered ready for the front.

The transition from the comedy and romance at the farm to the struggle to survive at the front is jarring, reflecting the actual contrast between the carnage at the front and the peaceful life that existed a mere twenty miles behind front lines. Further heightening the transition from safety to the dangers of the war, Jim’s unit passes exhausted, wounded men as they march to the front. 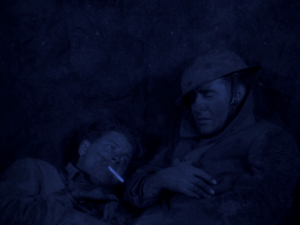 The movie certainly does not glorify war. Stuck in a shell hole, Jim rants that the war is not worth it, all they get is to sit in the mud listening to a buddy die. However, the Americans soldiers are all brave, even the wounded struggle forward. Later, there is a hard scene where he crawls after a wounded German soldier who had wounded him and is now trying to escape, but finds that he can not kill him, instead he gives the German his last cigarette. 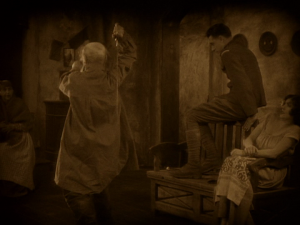 This is one of the few films where the ever-present soundtrack actually helps.

Jim’s girlfriend is thrilled that they are going to war, and thinks that he would look great in an officer’s uniform, but his mother is far less enthusiastic.

While the battlefield scenes are grim, there is some humor during the earlier scenes, especially when Jim receives a care package from his girlfriend, and Bull discreetly signals that he does not need to share the cake with the rest of the men, just him and Slim. There are a lot of good-natured shenanigans with the rest of the platoon when they are at the farm. At one point, his buddies break into the cellar and find the wine, he catches them, there is a fight and he is about to be arrested by the military police until his buddies start a brawl. 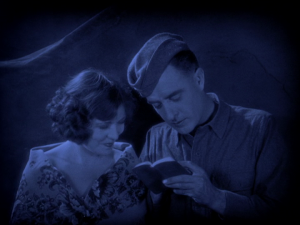 The romance occupies more than a third of the movie, but Melisande is fun and fiery. The courtship moves slowly since he relies on a very small dictionary to woo her. As their relationship deepens, Melisande even takes him a meeting in her home where her mom and neighbors read letters from men at the front. When one older man decides to use his saber as a prop while reading his son’s letter, Jim initially attempts to remain calm but then focuses on avoiding the saber, unwilling to become part of the performance. 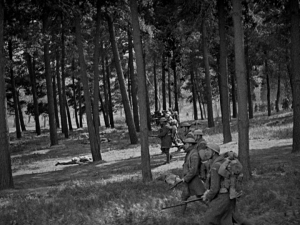 The first battle scene takes place in a forest and is based on the Battle of Bellau Wood during the German Spring Offensive. The woods seem surprisingly spacious because the scene was actually filmed in Griffith Park in Los Angeles, which had served as a location in The Steel Helmet (1951) as well. The actors were told to march to the sound of a drum to ensure that they moved at the same rhythm, which was ridiculed by all the veterans in the cast, who wondered if director King Vidor wanted to film a ballet. Unwittingly, they were correct.

Vidor intended the film to end with the scene where the young German soldier dies in the shellhole, but Irving Thalberg, head of production at MGM, felt it was not sufficiently dramatic, so he filmed a night battle scene to follow that scene. Made without Vidor’s involvement, the scene looks like a glossy battle scene, with endless explosions, as if it were taken from a different movie. 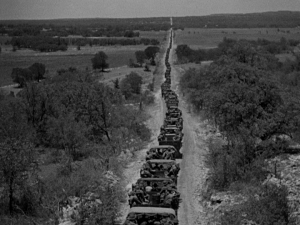 The Big Parade in the title is represented by an endless line of trucks advancing to the front. Vidor had arranged for the line of trucks to stretch into the horizon as if it was stretching out to infinity. Near the end of the movie, there is a similar scene of trucks on the road but they are ambulances leaving the front.

Sigh, it is not a fast-paced story. Thirty minutes could easily have been cut.