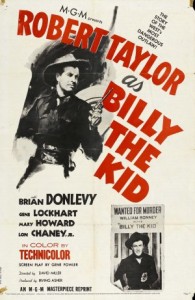 When notorious outlaw William Bonney (Robert Taylor) breaks his sidekick Pedro (Frank Puglia) out of the Lincoln jail, he attracts the attention of Dan Hickey (Gene Lockhart), the local strongman, who sells over-priced cattle to the government, and does not welcome competition from Eric Keating (Ian Hunter), an English rancher. While helping Hickey’s men stampede Keating’s cattle, Bonney discovers that Jim Sherwood (Brian Donlevy), a childhood friend from Silver City, is Keating’s foreman. Bonney is addicted to the dangerous life, but Sherwood tries to show him another life. Keating impresses Bonney with his refusal to carry a gun, while predicting that the coming of law and order will mean the end of Bonney’s way of life. After one of Keating’s cowboys is killed during a stampede caused by Hickey’s men, a disgusted Bonney quits to work for Keating. Regardless of the provocations, Keating refuses to fight back with guns, and persuades Bonney to follow the law. The state government makes Keating a marshal, and he deputizes Sherwood. When Keating is shot in the back while riding alone to visit a neighbour, Sherwood leads the men on the other ranches into town to arrest Keating’s killers. However, Bonney realizes that there is no place for him in the coming society, and takes the law into his own hands, even though it means a deadly showdown with his friend.

Although all of the characters except for Bonney are fictional, the script contains numerous elements from the real Bonney’s life, including Bonney’s removal of bullets from an enemy’s gun prior to a shootout, the promised pardon that never materialized, the execution of the town sheriff, the hunt for his employer’s killers and the surprise escape from the Lincoln jail. Presumably Hickey is based on Dolan, Keating on Tunstall and Sherwood on Garrett.

A key element of the plot is that the corruption symbolized by Hickey is limited to the town itself and does not represent the state as a whole. Emphasizing that the days of one small faction dominating an isolated community through the use of gunmen and murder were coming to an end, the script has the state government act swiftly and decisively to liberate the town from Hickey’s tyranny by making Keating a marshal. This idealized version of the Lincoln County War bears little resemblance to the real war, which was essentially a turf battle between two groups of greedy businessmen, who differed only in the degree of violence they were willing to employ. Tunstall was motivated by a desire to make money, not improve people’s lives, and had written letters to his parents where he said that he intended to gain enough control of the local economy that he would receive half of what everyone earned. More important, the corruption was entrenched. Unlike Hickey, who fears interference from the capital, Dolan relied on his political connections to harass McSween and Tunstall. In fact, these connections ensured that Governor Samuel Axtell, part of a group of powerful businessmen and politicians called the Santa Fe Ring, personally visited Lincoln for three hours to officially announce that the local justice of the peace who had deputized Tunstall’s cowboys actually did not have the required legal authority. Furthermore, Thomas Catron, another member of the Santa Fe Ring, was the territory’s Attorney General, as well as a major land speculator and backer of Dolan.

Since the screen Bonney can not be a villain, the script justifies his status as an outlaw by explaining that he first drifted into crime when he was twelve-years-old and stole a gun to avenge the murder of his father. The real Bonney was arrested for stealing a gun from a Chinese laundry but his father had died when he was a child and his step-father did not play a large role in his life. Moreover, Bonney was unknown when he first arrived in Lincoln, he only became famous during the Lincoln County War. The only man that he had killed prior to his arrival in Lincoln County was a bully named Windy Cahill, and it was probably self-defense since the much larger Cahill was beating him viciously at the time.

The fictional Bonney is left-handed because the only surviving photo of Bonney has him left-handed. However, camera technology was still relatively limited at the time, so the photo was actually a mirror image of the subject, which resulted in the mistaken belief that Bonney was left-handed.

It goes without saying that Robert Taylor is utterly miscast as Bonney, since he was a decade older than the outlaw. The other actors treat him as if he were a kid, which is a little strange since Taylor clearly is an adult, and does not even have a baby face. However, Taylor gives an excellent performance as a man straddling the line between law and outlaw. Tired of traditional leading man roles, Taylor had deliberately sought the role of the conflicted Bonney to broaden his range. Sherwood’s status as the hero of the film is confirmed when he is mounted on the only white horse during the climatic ride of all of the ranchers to the town. Having played the villain in numerous movies, Donlevy had trouble toning down his performance to suit the role of a hero.

The character of Pedro exists primarily to give Frank Puglia the opportunity to sing, but he sings well.

Parts of the movie were filmed in Monument Valley, so the scenery is simply gorgeous.

Billy the Kid is a romanticized version of the vicious Lincoln County War, but the movie accurately shows the consequences of waiting too long to leave the outlaw life.