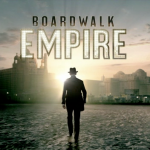 Following the dramatic end to the civil war for control for Atlantic City, the series has expanded its focus outwards, devoting more attention to the underworld in Chicago and New York, as well as the corruption in the national capital. Season three starts in 1923, roughly a year after the end of season two. Enoch ‘Nucky’ Thompson (Steve Buscemi) has gained firm control of Atlantic City, and all of the major bootleggers want to do business with him because he can guarantee the safe import of alcohol.

You can’t be half a gangster. 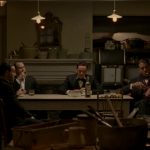 Nucky has evolved into a full-fledged gangster, giving his former position of treasurer to the sole alderman who had remained loyal during the previous season. Pressured by his government contacts to sell to a single customer to reduce attention, Nucky decides that Arnold Rothstein (Michael Stuhlbarg) will be his sole customer, which leads to war with Gyp Rosetti (Bobby Cannavale), an astonishingly thin-skinned gangster from New York, who resents Rothstein’s new monopoly. Nucky is based on Enoch Johnson, the real treasurer and political fixer of Atlantic City, who never fought a major gang war, since he simply collected a percentage from every bootlegger in Atlantic City.

Aside from the intensified violence, the show captures the ludicrous display of wealth made by the leading gangsters. At the end of Nucky’s lavish New Year’s Eve soiree, he brings out a trunk filled with real gold and diamond jewelry as party favors, and the society elite literally scramble for them. Extravagant generosity was an effective and common approach for successful bootleggers who wanted to buy their way into society. George Remus, one of the richest bootleggers in the nation, held parties where each guest received a new Packard car.

You want a nice floral display? 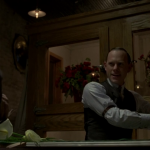 Dean O’Banion, head of the predominantly Irish North Side Gang in Chicago, is constantly pushing against the Torrio-Capone Syndicate, despite the division of territory, and Johnny Torrio (Greg Antonacci) is fed up with the need to soothe the feelings of volatile, homicidal business competitors. Unfortunately, the writers neglected to explain that the real Torrio had managed the impressive accomplishment of persuading all of the major gangs in Chicago to accept a clear division of territory, renouncing wasteful turf battles since there was more than enough money for everyone. Weird as it may sound, ruthless gangster O’Banion did operate a flower shop, and spent most of his time preparing floral displays. In fact, the shop was the preferred choice of gangsters in Chicago when ordering flowers for the massive funerals for the more powerful gangsters. 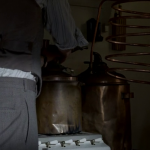 One of the strengths of the show is that it points out the widespread unpopularity of Prohibition. Actually, many government officials thought that Prohibition is idiotic. A Washington judge who deals with an endless procession of people arrested for drinking treats it as a misdemeanor and charges a $5 fine because a real trial is a waste of time.

Joe Masseria has an army. 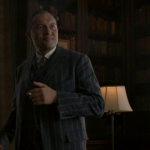 While greed was the driving factor in the vicious gang wars of the 1920s, generational conflict was also a key factor. Mafia don Joe Masseria symbolizes that conflict. Following the old traditions of clan loyalty, Masseria distrusts all non-Italians, Jews in particular. Resisting change, he ruthlessly defends his territory. Younger gangsters like Salvatore ‘Lucky’ Luciano (Vincent Piazza) hate having to bow down to Masseria, but he towers over the other gangs. Although he would eventually be eclipsed by his former proteges Luciano and Meyer Lansky, the real Rothstein was the most powerful non-Italian gangster at the time. However, he was literally dwarfed by Masseria’s organization. Lansky (Anatol Yusef) plays a larger role this season, growing from Rothstein’s underling to independent operator.

Corruption had spread throughout the government. 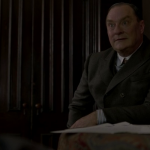 Corruption was widespread in the Warren Harding administration, and much of it was managed by Attorney General Harry Daugherty. Aside from the straightforward transaction of exchanging alcohol permits for large envelopes stuffed with money, several of Harding’s cronies, led by Daugherty, were engaged in property speculation, which eventually became known as the Teapot Dome Scandal. Jess Smith, Daugherty’s main aide, was an influence peddler and bagman, receiving payments from bootleggers in exchange for permission to buy alcohol, officially for pharmacies. Like the fictional character, the real Smith died of a gunshot wound to the head on May 20, 1923, which was officially declared suicide, although there was no autopsy. Gaston Means also existed, and worked for Daugherty’s Justice Department as a fixer, investigator and bagman, dealing with bootleggers. Means, played by Stephen Root, is the standout character of the season. 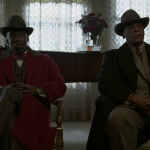 Having progressed from politician with shady dealings to card-carrying gangster, Nucky employs the threat of physical violence to convince famous comedian and singer Eddie Cantor (Stephen DeRosa) to help his girlfriend in a musical. It is fitting that the threat is made by Chalkie White (Michael Kenneth Williams) and Dunn Purnsley (Erik LaRay Harvey) since Cantor had started his career in blackface, playing a stereotypical caricature of African-Americans.

It will work this time. I know I said that before but this time is different. She’s younger. 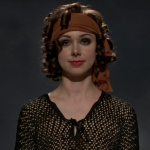 The script focuses more than necessary on Nucky’s relationship with his mistress Billie Kent (Meg Chambers Steedle). Admittedly, Billie is spellbinding, and his track record with previous lovers indicates that he is unable to handle the responsibility of a real relationship. Furthermore, the series captures the flamboyance of the Jazz Age, and the stunning new industry of moving pictures that was gradually luring people away from the theatre. Billie’s screen test is a joy to watch, and she incarnates the flapper/dancer/actress brilliantly.

Please explain the spaghetti with meatballs. 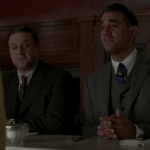 Although Gyp Rosetti is portrayed as a villain with a psychotic temper and strange sexual tastes, many gangsters were equally violent with hair-trigger tempers. Embracing the physical intimidation of a thug, Rosetti masks his menacing body language with a polite demeanour. A true predator, he honestly enjoys playing with people, scaring them without overtly threatening them. Being Rosetti’s number two must have been torture, since you never knew what he would do next. Although Masseria is initially uninterested in Rosetti’s war with Thompson, Rosetti wins his backing by pointing out that Thompson, Rothstein and Luciano are building something that does not include Masseria.

Thank you for coming, both those who came willingly and those who were brought here at gunpoint. 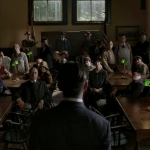 Rosetti’s takeover of the tiny community of Tabor Heights to strangle Nucky’s bootlegging operation shows the weakness of small towns. Sheriffs could literally be killed in public, and the townsfolk were easily bribed or intimidated.
The violence has been ramped up this season, especially the crazy, blood-drenched assassination attempt on Rosetti. Actually, the entire battle for Atlantic City is made up, although the repeated gun battles in the street resemble the open warfare that was far too common in Chicago and New York City.

Women may have received the vote but they still were not considered equal in their homes. 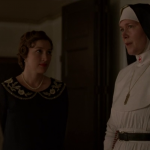 Witnessing a miscarriage firsthand, the tragedy makes Margaret Thompson (Kelly MacDonald) aware that many women lack basic knowledge about reproduction, hygiene, nutrition or safe sex. Displaying an amazing ability as a schemer, she manipulates the Catholic Church to outmanoeuvre the administrator of the hospital, who initially resisted her proposal of a class on women’s health. The negotiation between Margaret and the nun appointed by the bishop over which terms are acceptable to describe women’s reproductive process, including menstruation, is both hilarious and depressing, revealing the intentional ignorance advocated by the Church. The mention of sanitary napkins causes the nun, a formidable woman, visible discomfort. Lacking birth control. women were at the mercy of their husbands, since the men were oblivious to the danger caused by repeated pregnancies in rough living conditions, therefore the doctor teaching the women’s health class openly hopes to destroy the ignorant superstition that wrecks women’s lives. The fear of the public discussion of women’s reproductive issues may seem hopelessly out-dated today, but those topics remained taboo deep into the 20th Century. Female characters on television shows in the 1970s could only be described as being with child, not pregnant.

Gillian Darmody wins the Award for Creepiest and Most Deranged Character. Again. 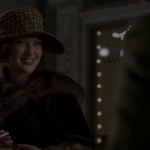 Meanwhile, Gillian Darmody (Gretchen Mol) also craves independence, although her goal is more traditional, a whorehouse, if classier than most. Aside from her disturbing attempt to convince her grandson that she is actually his mother, how Gillian deals with the death of her son has to be seen to be believed. Seeking an alliance with Rosetti to gain revenge for her son’s death, she finds that she has met her match. It was inevitable that the two freakiest, most manipulative characters on the show, Gyp and Gillian, have a showdown, and it lives up to expectations.

They just fucked with the wrong WWI veteran. 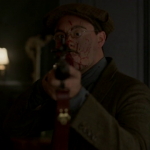 Disfigured WWI veteran Richard Harrow (Jack Huston) finally finds romance, after meeting the daughter of a veteran of the Phillippine-American War (1899-1902), who has not adjusted to the death of his son in WWI. Angry at life and disillusioned, the disgruntled vet makes life miserable for everyone who has the misfortune to be around him. After Gillian uses Rosetti to ban Harrow from her house in order to solidify her control over her grandson, Harrow unleashes a righteous wrath on Rosetti’s men to save Tommy.

Since the series revolves around men who settle disagreements with bullets, a number of characters have left the cast. Manny Horowitz (William Forsythe) departed the show in an abrupt manner. To my continued irritation, Mickey Doyle, the most annoying gangster ever, has managed to survive even though he is so irritating that one of the characters honestly asks why he is still alive.

Best line in the season: We been on the road for 18 hours, I need a bath, some chow, and then you and me sit down, and we’ll talk about who dies.

Each season explores more of the world outside of Atlantic City, and the stage has been set for the rise of Al Capone in Chicago, his war with Dean O’Banion, and the growing conflict between Masseria and the younger generation of gangsters in New York City. Boardwalk Empire has managed the impressive feat of making each season better than the previous one.