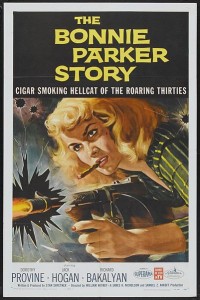 Bonnie Parker (October 1, 1910-May 23, 1934) and Clyde Barrow (March 24, 1909-May 23, 1934) were poor, young people with little hope for the future when they met in Dallas, Texas in January 1930. Clyde was arrested shortly after, which would have ended most relationships but Bonnie’s love was true. Despite a brutal experience in prison, Clyde hated the drudgery of honest work, so he returned to a life of crime, bringing Bonnie with him. After a drunken encounter with police officers at a dance resulted in a dead deputy on August 5, 1932, surrender was no longer an option for Clyde because he would get the electric chair. Recently released from prison, his elder brother Buck met Clyde, Bonnie and new recruit, 16-year-old W.O. Jones, hoping to persuade Clyde to surrender, but the vacation ended on April 13, 1933 when two police officers died in a shootout, and Buck and his fiance Blanche found themselves part of the gang.

The gang became national celebrities after pictures of them posing with guns were found in their abandoned apartment. Several months later, Buck was severely wounded in another shootout with police, and died of his wounds shortly after a posse discovered the gang’s campsite. Hoping to gain more members for the gang, Clyde helped several prisoners break out of Eastham Prison Farm on January 16, 1934. Angered by the attack, the warden persuaded the governor of Texas to hire former Texas Ranger Frank Hamer to hunt down the gang. Betrayed by gang member Henry Methvin in exchange for a pardon, Bonnie and Clyde were lured into an ambush where they were killed on May 23, 1934.

Guy Darrow (Jack Hogan) pursues Bonnie Parker (Dorothy Provine), a bored, married waitress, whose husband is in prison. Recognizing that she is headed for a career as a prostitute since jobs are hard to get in the Depression, she agrees to work with Darrow. After robbing a bar, and then a gas station, Parker and Darrow are soon wanted for several murders. Since they have repeatedly crossed state lines, state police can not deal with them, so Texas Ranger Tom Steele (Douglas Kennedy) is assigned to hunt them down. Forced to live in farm houses to avoid police attention, Parker has realized that Darrow is yet another two-bit operator. Darrow’s brother Chuck (Joe Turkel) arrives with his girlfriend, but unknown to them, Steele had arranged for Chuck to be paroled and followed him. The two couples find themselves surrounded, but they shoot their way out. Tired of robbing grocery stores and filling stations, Bonnie takes charge and makes them rob banks. However, a wounded Chuck and his girlfriend are caught after they are ambushed by Steele and several deputies. After they help Bonnie’s husband Jefferson (Richard Bakalyan) escape from a work farm, they rob a bank. They are planning to rob an armored car which picks up cash from several banks, but the police arrive sooner than expected, and Darrow resolves the romantic triangle by killing Jefferson, pretending that it was an accident. Determined to get rich, Bonnie decides to hit a bank in Louisiana, so they contact a couple of Darrow’s old cell-mates, but their father tells Steele, who leads a posse to ambush them on the road.

Hm, to be honest it is not very accurate.

Unlike the real Barrow Gang, no vacation pictures are captured, but it does show them living in the woods, eating out of cans after Steele interrupts the family reunion. However, the film is wrong to have them living in remote farms before they become famous, clearly an attempt to show that the outlaws never enjoyed the fruit of their robberies. In reality, they lived large until their pictures were printed in newspapers, which made it impossible for them to show their faces in public.

The screen Bonnie did not know her husband was a criminal until he was arrested, and now she has a reputation so she can not get a decent job. It is true that Bonnie married a criminal, but she was not guilty by association. It was simply hard to find good jobs during the Depression.

The relationship between the screen Bonnie and Darrow is not exactly love at first sight. When Darrow makes advances, she threatens to shoot him.

There is no mention of the rest of the Public Enemies or the nation-wide crime wave, but the script deserves praise for showing that they robbed gas stations, not banks. Given the screen Bonnie’s fierce personality, the gang is understandably called the Bonnie Parker Gang, even though the real gang was called the Barrow Gang, and there is no evidence that Bonnie actually took part in any of the robberies.

The movie ignores the many vigilante groups and deputized farmers who manned roadblocks and formed posses, playing a key role in the war against the Public Enemies. Instead, the outlaws are only hunted by formal law enforcement officers, as if the screenwriter wanted to reassure the viewers that the authorities had the situation under control. Furthermore, Steele is an active Ranger, even though he is clearly modelled on Frank Hamer, a legendary but retired Ranger, who was a private citizen when he organized the ambush that ended the lives of the real Bonnie and Clyde. Actually, Steele’s character makes little sense. A Texas Ranger had no authority outside of Texas, but Steele directs the pursuit across several states, and even has the authority to arrange the release of Darrow’s brother in the hope that he will lead them to the outlaws.

The movie starts off with a voyeuristic scene of a buxom Bonnie changing into a waitress uniform, which is kind of creepy and unnecessary. The script ups the yuckiness factor when it shows that firing guns turns her on.

To be honest, Bonnie’s decision to rob banks with her husband and her boyfriend seems idiotic. Refusing to sleep with either man, Bonnie makes them sleep in the living room, and even leaves tacks on the floor to ensure that neither of them jump her while she sleeps.

Meanwhile, Bonnie falls for a neighbor who studies architecture at night school. The first decent guy she has ever met, their love is doomed. And ignored for the rest of the movie. The brief interlude seems to have been added to the script to make Bonnie a bit sympathetic.

Yet another crime-does-not-pay film filled with endless snarling between the outlaws. Man, the late fifties sucked for this type of film. Five movies were made about the Public Enemies between 1957 and 1960: Baby Face Nelson (1957), The Bonnie Parker Story (1958), Machine-Gun Kelly (1958), Ma Barker’s Killer Brood (1960) and Pretty Boy Floyd (1960), and the only one that was halfway enjoyable was Ma Barker’s Killer Brood.