Since the new BBC show The White Queen is adapted from the series The Cousins’ War by Philippa Gregory, and another series, Outlander by Diana Gabaldon, will also become a series on Starz, I have prepared a list of historical fiction series that are screaming to be adapted as television shows. 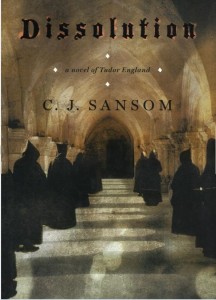 Enough time has passed since the Showtime series The Tudors (2007-2010) for another look at the reign of Henry VIII. A common complaint was that the show was too glossy. If HBO wants to break its addiction to United States history, it should consider adapting C.J. Sansom’s novels about Matthew Shardlake, a London-based lawyer during the reign of Henry VIII. The books explore the underside of England and do not paint a flattering portrait of the king or the powerful people in his court. While the Tudors focused on the king and the jockeying of nobles for favor, the Shardlake novels present the struggle of the middle and lower class to get ahead and avoid being drawn into the conspiracies of the nobles. Shardlake is a hunchback, and just as Peter Dinklage won an Emmy for his portrayal of Tyrion Lannister in Game of Thrones, there is an award waiting for the right actor as Shardlake. In fact, I have difficulty thinking of any positive portrayals of hunchbacks in either film or television. In many ways, Shardlake reminds me of John Mortimer’s Horace Rumpole, a British barrister who frequently found himself mixed up in mysteries that revealed the less-pleasant aspects of polite British society while accumulating an ever-increasing bar bill. However, Sansom shares George R. R. Martin’s dark view of the world, so the books are not overflowing with humor.

With five sizable novels there is enough material. Martin had only finished four of the seven books when Game of Thrones was greenlit, so an abundance of material would undoubtedly be a relief to the producers at HBO or whoever does it, but it feels like a good fit for HBO. Although it is a mystery series, violence is not uncommon, and there is a constant sense of dread, especially since the investigations often take place in gloomy, badly-lit areas at night. Aside from the king’s procession north in the third book and the preparations to fight the French in the final volume, everything takes place in London or an extremely spooky monastery, therefore it will be relatively inexpensive to film once the main sets have been built.

2) The Aubrey/Maturin series by Patrick O’Brien. 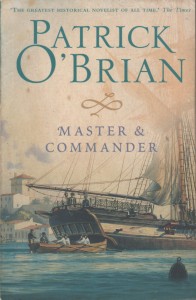 The twenty novels present the friendship between brilliant Royal Navy Captain Jack Aubrey and brooding surgeon/scientist/spy Stephen Maturin during the period 1800-1815. Aubrey is loosely based on Thomas Cochrane, a daring Royal Navy captain who was dismissed from the navy in 1814 after he was convicted of fraud in the London Stock Exchange, and then fought in the navies of Chile, Brazil and Greece during their respective wars of independence. The land campaigns of the Napoleonic Wars (1803-1815) have already been covered by the excellent TV movies about the British rifleman Richard Sharpe, played by Sean Bean, but the naval warfare deserves a show. I know, the movie Master and Commander: The Far Side of the World by Peter Weir is based on elements of three of the novels. A series of twenty novels that is essentially one incredibly long story could not be contained within a single movie. Each novel is roughly 300-400 pages long, which is a total of 7,000 pages, or four books in George R. R. Martin’s series.

O’Brien seemed to delight in ignoring convention. His heroes lost battles, were often frustrated in their relations with the opposite sex, were frequently shipwrecked, and voyages lasted for several books. Aubrey was a seaman with few rivals but a complete innocent on land, falling victim to every confidence man in Britain. Maturin was a gifted surgeon and deadly spy but an unbelievably inept sailor who fell over-board with embarrassing regularity and battled insomnia with frightening amounts of laudanum. Most important, the books immerse the reader in the language, the ignorance and the strict social customs that governed the relations between even the closest friends at the time. Without a doubt the best books I have ever read.

3) The Saxon Tales by Bernard Cornwell. 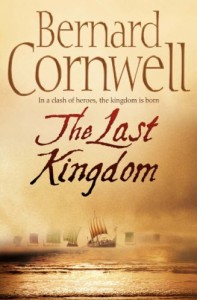 King Alfred of Wessex, reluctantly assisted by his warlord Uhtred Ragnarson, the protagonist of the series, resists the invasion of the Danes, including the three sons of Ragnar Lodbrok, who is the lead character on History’s series Vikings, and eventually forges a single English nation. Cornwell is justly famous for his battle scenes, but the dynamic between Alfred and Uhtred is the series’ strong-point. The rightful heir to a kingdom in Northumbria, the first English kingdom to fall to the invaders, Uhtred is raised by the Vikings but finds himself fighting for Alfred against the Danes. Physically weak, Alfred’s iron will and manipulative nature win Uhtred’s respect despite a deep loathing of Alfred’s Christian faith and annoying habit of giving money to the Church, instead of the army. Both men are flawed, and Alfred is especially lacking in positive virtues. I am a big fan of the books, but Cornwell can be a little formulaic at times, so it would benefit from a writing team in the same way that George R. R. Martin’s massive Song of Ice and Fire series has been improved as HBO’s Game of Thrones. Martin is a good comparison, since the two men are mutual admirers.

Cornwell’s contempt for Christianity permeates the books, but Vikings has shown that there is a market for a series where the protagonist is a pagan. The series would be a good fit for the BBC because it deals with the early history of England. Six books have already been published, with a seventh on the way. Admittedly, the books are a little short, 300-plus pages, but the books that are the basis for The White Queen are not much longer. While Cornwell’s previous creation, British rifleman Richard Sharpe, fell in love at the drop of a perfumed hankerchief, Uhtred seems to have limited himself to only several lovers, so the romance is a level between bodice-ripping and James Bond. 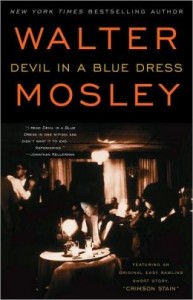 There has yet to be an historical series with a black lead. Admittedly, Common plays one of the leads on Hell on Wheels, but the show is really about Cullen Bohannon, even though I think it should be about the railroad. Walter Mosley’s series of detective novels featuring Ezekiel “Easy” Rawlins’ would be an excellent choice. President Bill Clinton’s favorite series, it does not lack for sex. The time frame covers post-WWII to the late 1960s, so the characters could age. The first book in the series, Devil in a Blue Dress, has already been been adapted into a movie, where Denzel Washington played Rawlins. The movie is great but the series deserves more than a single movie. Aside from the eleven novels, there is a collection of short stories that could be used to pad out the other books.

Although the Rawlins stories are set in Los Angeles during the same time period as Frank Darabont’s new series Mob City, which presents the decades-long struggle between the LAPD and gangsters led by Mickey Cohen, they inhabit very different worlds. The books deal with the Red Scare of the early 1950s, the Kennedy Assassination, the Black Panthers, the Watts Riots of 1965, the Summer of Love in 1966, and Vietnam veterans.

While racial discrimination is merely one of number of plot elements in several shows, notably Copper, Boardwalk Empire and Hell on Wheels, it is an integral part of Easy Rawlins’ life. As a black man, Rawlins can not be a licensed private detective, at least in the first few books, and racist police officers frequently prove a greater threat than the people he is investigating. Unlike almost all of the other series mentioned on this list, Rawlins is a family man with a son and a daughter who were acquired through circumstances that are equally bizarre and tragic. Throughout the mysteries, Rawlins struggles to raise his young family, and deals with a growing problem with alcohol. 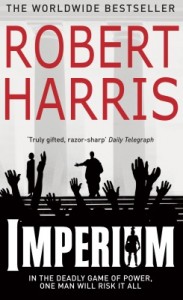 Now that Spartacus is over, someone has to wear all of those leftover togas in wardrobe. The Cicero trilogy would be a fitting choice since the series begins when Cicero refuses to vote for a triumph for Crassus following the defeat of Spartacus’ rebellion. The books burst with brilliantly dark politics that reveal the flaws of the Roman Republic, explaining the struggle between the aristocrats, comfortable in their traditional authority, and new men like Pompey and Caesar, who are willing to manipulate the masses to gain power, factors that would cause the change from republic to empire. Unlike all of the major players in Rome at that time, Cicero gained power through his oratory and his mind, not military victories or birth. Cicero is a new man, but resists Crassus’ blatant use of his wealth to buy public office for his supporters, and wins election to consul through an alliance with the aristocracy.

A highlight of the series is the contrast between Cicero’s relentless ambition and the narrator’s wonderment that anyone would scheme for power when they could be sitting in the sun reading a good book. The narrator’s amazement is fitting since hubris destroys Cicero in the end. Cicero was portrayed wonderfully by David Bamber on Rome, but that Cicero was in his decline, reduced to selling his oratory and political skills to the highest bidder. 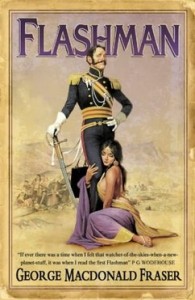 Fraser is my favorite writer, but I just can’t see any cable network making a show about the Flashman series. Over the course of thirteen books and roughly fifty-five years (1839-1894), Sir Harry Flashman, V.C. gambled, toadied, rogered, quavered, lusted, cringed, and abandoned companions and lovers to save his own skin, and yet retained his public image as a hero of the British Empire. Very, very rarely, and always against his better judgement, he did the decent thing. The books are the fictional Flashman’s memoirs, and they illustrate with brutal, unflinching honesty both the glory and the grime of the British Empire. However, the huge number of locations would make the show prohibitively expensive, since Flashman’s adventures take him, usually against his will, to India, Russia, China, Africa, Northern Europe, and the United States, as well as England.

Maybe I am wrong, and audiences are ready for leads with dubious morality. Netflix’s House of Cards has been a big hit, and Kevin Spacey’s character shares Flashman’s habit of speaking directly to the audience. Aside from the benefit of the lead character admitting his sins and providing an unvarnished look at historical events, the show would be a one-stop-shop for the Victorian period. Having taken part in the Charge of the Light Brigade during the Crimean War, Custer’s Last Stand, the British retreat from Kabul, the Indian Mutiny, The Taiping Rebellion, and John Brown’s Raid on Harper’s Ferry, led a wagon train across the American plains, and served on a slave ship, Flashman would educate viewers about an era that has received little attention.

The Genghis Khan Trilogy by Conn Iggulden.
The first book was a gripping tale of the struggle for survival after Genghis and his family are exiled from the tribe, but once the conquering starts, the writing becomes predictable, as Genghis’ horse archers overwhelm the soft armies of China and the Middle East with ridiculous ease.

Does anyone have any other suggestions?

UPDATE: Bernard Cornwell’s Saxon Tales has been made by the BBC as The Last Kingdom, and I have reviewed the first season.