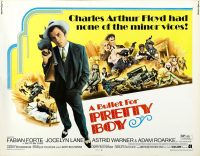 Charley “Pretty Boy” Floyd (February 3, 1904-October 22, 1934) grew up on a farm in Oklahoma. Tiring of the harsh existence and drudgery of farming, he left his wife and newborn son at home and looked for better employment opportunities outside the state. Robbing a bank, he was arrested after flashing around money, and spent three and a half years in prison, where he learned the science of robbing banks. After his release, he partnered with George Birdwell to rob numerous banks in Oklahoma until Birdwell died during a shootout in November 1932. Floyd had become notorious in Oklahoma, but was still able to make frequent visits to his family. However, he attracted national attention when it was learned that he had arrived in Kansas City the evening before the Kansas City Massacre, a failed attempt to rescue bank robber Frank Nash, which left four lawmen and Nash dead, on June 17, 1933. Hoping to wait out the attention, Floyd hid for a year in Buffalo, New York. When the FBI announced on October 11, 1934 that he was considered a major suspect, Floyd tried to reach the safety of his family in Oklahoma, but was fatally wounded trying to escape a group of FBI agents and local police officers in East Liverpool, Ohio on October 22, 1934.

A celebration of the wedding between Charles Floyd (Fabian Forte) and his girlfriend Ruby (Astrid Warner), turns ugly when an ex-boyfriend crashes the party. Humiliated, he tries to shoot Floyd but kills his father. A later confrontation between the two men ends with Floyd killing him in self-defence, and Floyd receives six years on a work farm. The work is rough and the guards are rougher, so he convinces a lifer to take him on his escape attempt, and ends up in a brothel run by Beryl (Anne McAdams). Lonely, Floyd starts a relationship with Betty (Jocelyn Lane), who works in the brothel. Jealous of Floyd, Beryl’s brother gives him the nickname Pretty Boy. Beryl introduces Floyd to a couple of bank robbers who need a third man. After several unbelievably easy robberies, they walk into a trap. However, Floyd escapes by taking a gun from a guard and then jumps off the moving train. Even though many of their neighbors and friends have lost their farms, Ruby does not want him to go back to robbing banks, but he leaves and takes his drunk preacher friend (Adam Roarke) with him. Jealous that Floyd and his friend took their girlfriends, Beryl’s brothers try to capture Floyd but are killed in the attempt. Forced to leave the brothel, Floyd, Preacher, their girlfriends and another friend start robbing banks. When bank robbery becomes a federal offence, the Bureau assigns investigator Hossler (Robert Glenn) to the case. Hossler and a number of police officers track the outlaws down and ambush them when they are leaving a motel. On the run, Floyd resolves to go home, even though the police are closing in.

The screen Floyd is driven to a life of crime following the murder of his father, but the real Floyd had already spent several years in prison for robbing a bank courier before his father was killed by a business rival after a heated argument. In addition, a bitter Ruby had already divorced him while he was in prison. However, the escape from the moving train did occur, without the drama of shooting a guard. Instead, the genuine Floyd had vowed to never return to prison, and chose to risk his life by jumping from a moving train.

Released from prison, the real Floyd settled in Kansas, staying in a boarding house frequented by criminals run by Mother Ash, and he got his nickname ‘Pretty Boy’ from Ash’s daughter-in-law Belulah, who saw him all dressed up, and said “hello pretty boy, where did you come from?” Floyd and his friend Willis Miller eventually hooked up with Belulah and her sister Rose, who had left their husbands, Ash’s two sons. When the Ash brothers were suspected of becoming informers, the two men disappeared and Mother Ash was convinced that Floyd and Miller were responsible. In the film, Beryl and her brothers stand in for Mother Ash and her sons.

The research was clearly inadequate, since the screenwriter missed one of the basics of banking robbing, namely the need to leave a driver in the car to ensure a rapid getaway. When Floyd, Preacher, another friend and the two sisters start robbing banks, all five go into the banks together, instead of one staying as the driver, even though that is Bank Robbing 101.

Preacher’s drinking problem is based on the real Floyd’s partner, Adam Richetti, who was viewed as unreliable by other bank robbers due to his heavy drinking.

When bank robbing becomes a federal offence, the Bureau assigns investigator Hussler to the case. The passage of legislation making bank robberies a federal crime was a turning point in the war against the Public Enemies. However, Floyd was initially relatively low on the Bureau’s list of targets.

Pretty Boy Floyd only became famous outside of Oklahoma because he was a suspect in the Kansas City Massacre, but the massacre is never even mentioned in the film.

Floyd is conflicted about his wife and his girlfriend, but when they finally meet, Betty and Ruby reassure each other that they can share Floyd, which probably reflects the time when the movie was made.

The soundtrack is good. The locations and period cars are great. Unfortunately, the dialogue is dull, and is not helped by the performance of the actors. Few of the actors were seen in other movies for a reason. In particular, the actress who plays Ruby is pretty but lifeless. Basically, I enjoyed the movie whenever no one was talking. Um, the best that I can say is that it is not horrible. At least, its weaknesses can be blamed on a low budget and a cast of amateurs, unlike far too many big-budget spectacles that are hard viewing.