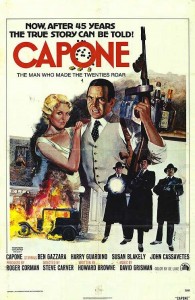 In 1918, a young hood named Al Capone gains the attention of New York gangster Frankie Yale by stopping police from arresting Yale’s men while they were robbing a fur warehouse. He also impressed Johnny Torrio, an associate of Yale, who had moved to Chicago in 1909, and was working with Big Jim Colosimo, the most powerful gangster in the city. Frustrated by Colosimo’s refusal to get involved in bootleg alcohol when Prohibition started, Torrio asks Yale to send Capone to help him in Chicago. Once Colosimo is out of the way, Torrio forges a truce with the other major Chicago gang leaders: Dean O’Banion, the Genna brothers and Spike O’Donnell; convincing them to stay out of each other’s territory. Unfortunately, O’Banion is not content with his own territory and takes over Spike O’Donnell’s area. Despite the flagrant violation of the agreement, Torrio refuses to interfere, and open warfare breaks out between the Gennas and O’Banion. Disgusted that Torrio is willing to offer O’Banion territory to avoid war, Capone decides to end their relationship.

Fed up with the constant fighting, Capone plans the St. Valentine’s Day Massacre and becomes the dominant gangster in Chicago.

Capone did not get the scars on his face from a police beating/interrogation, but from a local tough when Capone made an indelicate yet complimentary comment about his sister.

The portrayal of Colosimo is quite accurate, including his fixation with diamonds, but he declined to sell bootleg alcohol because he had fallen in love with a woman who wanted respectability, not because he thought Prohibition would only last six months. While Torrio’s exact role is debated, the killing of Colosimo was believed to have been performed by Yale. Having known Capone since he was a little boy, Torrio had sent for Capone in late 1919.

Although several more gangs were involved in the truce, including the West Side O’Donnells, not Spike O’Donnell’s gang, the allocation of territory is basically correct. There was a brief war between Torrio’s Syndicate and Spike O’Donnell’s gang, who were angry at being excluded from the treaty. However, the real struggle was between O’Banion, an Irish gangster who controlled the North Side, and the Gennas, who dominated Italians in the South Side of Chicago. It is true that O’Banion said “Tell those Sicilians to go to Hell,” but it was his response to Torrio’s suggestion that O’Banion forgive Genna’s gambling debt in the interest of peace.

Torrio’s Syndicate did take control of the small town Cicero, but only after a day-long battle with police imported from nearby Chicago, and one of Capone’s brothers died in the fighting. Bribes were used in Chicago, but guns ruled in the small towns, and Capone even beat the mayor of Cicero senseless on the steps of city hall when he tried to be independent. However, Capone knew that it was cheaper to pay bribes than lose business to raids, as long as the local police did not get too greedy.

A skilled organizer, the genuine Torrio did teach Capone how to deal with the establishment, but he did not try to turn Capone into a WASP. The elite of Chicago, such as Joseph Stenson, one of Chicago’s leading brewers, forged partnerships with Torrio and Capone because they were lured by huge amounts of money produced by the sale of illegal alcohol. Since Torrio’s connections in city hall would permit Stenson to sell beer, Stenson sold him a share in the brewery.

While O’Banion’s fate is accurate down to the last detail, the movie does not properly explain that his sideline was florist to the gangsters or that he had continued to live because he enjoyed the protection of Mike Merlo, head of the powerful Unione Siciliane. Aware that the killing could not have happened without Torrio’s approval, the real Hymie Weiss, O’Banion’s successor, vowed revenge.

The frequent drive-bys and car chases present the rampant, public violence in the city caused by warfare between the gangs. Capone did not introduce the Tommy Gun to Chicago, but he fell in love with the machine gun after it was used in a failed assassination attempt by Weiss. Unlike many movies set during Prohibition, a whorehouse is shown in some detail to remind viewers that prostitution provided a considerable part of the gangsters’ income.

While the story follows the basic chronology of events, the screen version of Torrio is much too weak. In the movie, Torrio’s willingness to appease Weiss and Bugs Moran at any cost drives Capone to usurp control of the gang. Admittedly, the real Torrio considered himself to be a businessman, but he was not afraid to use violence, and he did not offer a good chunk of his territory to Weiss and Moran in an effort to buy peace. Torrio did give the entire business to Capone after recovering from the bullets Weiss put into his body, but it was from the safety of his jail cell. Realizing how much blood would be spilled in a war, he chose to walk away from the business, taking his massive savings with him. It was far from certain at the time that Capone would win the war since he had barely survived several ambushes. Despite traveling surrounded by a wedge of bodyguards at all times and having a personal chef who tasted his food, Capone’s continued existence was uncertain.

The fictional Capone is fearless and contemptuous of city hall. It is true that the head of the Chicago Crime Commission personally persuaded Capone to guarantee that the 1928 municipal election would be fair, which did mean that the gangster dominated the city. However, Capone’s power was far from absolute. When Mayor Bill Thompson tried to clean up the city as part of a bid for the presidency, Capone decided to take an extended vacation in Miami. When Assistant State Attorney William McSwiggin was killed because he had the misfortune to be drinking with gangsters who were feuding with Capone, the police did so much damage to his operation that he fled to Michigan for the summer.

The relationship between Capone and the thrill-seeking and seriously twisted flapper is definitely entertaining, but the real Capone was married. Although he had mistresses, he took his public image seriously. There is no mention of Capone’s wife and family, but there is a lot of frontal nudity. Furthermore, his older brother Ralph, who played a key role in the organization, does not appear in the movie.

Key events such as the hit on Torrio, Weiss’ fate and the St. Valentine’s Day Massacre were faithful to actual events. The movie is pretty accurate until the final act when a trusted member of Capone’s organization sells him out, making it appear that Capone’s eventual downfall and arrest was due to betrayal, not the hard work of IRS investigators. At that point, the film becomes an alternate history of Capone, erasing both Eliot Ness and the IRS from the story, as well as ignoring the treaty that re-divided the city and made Capone the alpha gangster.

While Capone did have syphilis, it did not turn him into a psycho who threw men around like they were dolls. Instead, he just flopped around in epileptic fits, which probably contradicted the tough guy image that the movie strives to project. Moreover, the actual Alcatraz was a harsh environment where prisoners could not talk, which drove a number of convicts to commit suicide. After his release, Capone did end up at Palm Springs, gradually losing his mind.

The screenplay’s attempt to illustrate that a gangster’s worst enemy is not another gang, but the guy in your gang on the ladder behind you is far from subtle. It is also wrong, since most of the gangsters were killed by rival gangs, not their own men.

The movie is quite violent for the time. The sets are quite good for a Roger Corman production.

Gazzara was forty-five-years-old when he did the movie, so he was much too old to play Capone who only turned 30 in 1929. Gazzara portrays the menace and insane temper but not enough of the jovial charm that beguiled so many people. Gazzara’s Capone is far too cocky, with none of the whining that his son never got to see him because it was too dangerous.

The casting is odd. Jake “Greasy Fingers” Guzik was a slovenly, pear-shaped mass of blubber, not a dapper, mild-mannered WASP, while Frankie Yale was much bigger and tougher than Cassavetes. Stallone still had little presence as an actor, so his scenes are less effective than they should be.