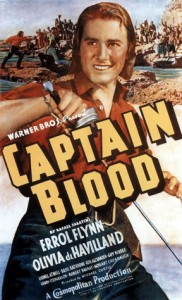 When Charles II died in 1685, he was succeeded as King of England by his younger brother James II, but many Protestants were unwilling to be ruled by a Catholic, therefore they supported a rebellion by the Duke of Monmouth, the illegitimate son of Charles. Although it was coordinated with a rebellion in Scotland, the Monmouth Rebellion (May-July 1685) was crushed within a month by the regular army, which remained loyal to James. Determined to eliminate opposition to his rule, James had more than a thousand of Monmouth’s supporters tried by Judge Jeffreys during the Bloody Assizes, where the punishment was either death or transportation. Despite the victory, James II lost popular support due to his policy of tolerance for Catholics and his growing ties with France. The birth of his son James changed the order of succession, making James the heir apparent, not his Protestant daughter Mary. Fearing a Catholic dynasty, members of the governing Tories worked with the opposition Whigs to invite Mary and her husband William III, ruler of the principality of Orange in the Dutch Republic, to rule. William landed with his army on November 5, 1688, and much of James’ army proved unwilling to fight, so he fled to France on December 23. 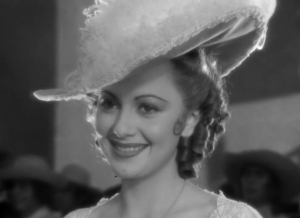 Following Lord Monmouth’s failed rebellion against King James II in 1685, Doctor Peter Blood (Errol Flynn) is arrested for treating a wounded rebel. Tried by Judge Jeffreys, he is sent to Port Royal, Jamaica to be sold into slavery. Blood’s defiant nature annoys Colonel Bishop (Lionel Atwill), the leading planter, but his niece Arabella (Olivia de Havilland) buys him to spare him from a hellhole. Although he initially resented her for buying him, Blood gradually falls for the lovely Arabella. When a Spanish pirate attacks Port Royal, Blood and his followers escape in the chaos, and capture the Spanish warship. Determined to take revenge against the tyrant that threw them into slavery, they become pirates, terrorizing the Caribbean. A drunken Blood agrees to a partnership with Levasseur (Basil Rathbone), his main rival within the Brethren of the Coast, despite his misgivings about Levasseur’s bloodthirsty nature. When Arabella falls into Levasseur’s hands, Blood finds himself duelling with Levasseur to save her from captivity. Unaccustomed to courtship, Blood tries to impress Arabella with his loot, but she has no interest in a pirate. However, the situation changes when Blood learns that James has been overthrown and replaced by William during the Glorious Revolution. 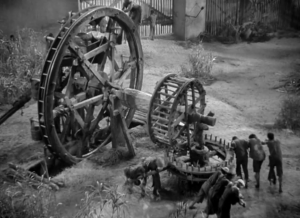 The portrayal of the Bloody Assizes is spot on. Transportation was used to rid England of the crown’s enemies, while providing cheap labor for the colonies. The sugar plantations on Jamaica generated huge wealth, which was actually created through back-breaking labor from slaves and indentured servants, including Puritans, Irish and Scottish nationalists, landless poor and criminals, basically whichever group had recently annoyed the English government. Between a third to half of the indentured servants did not live to see the end of their service. Those that did discovered that wages were low and there were few jobs for unskilled laborers, so many sold themselves back into servitude. The movie captures the horrific conditions endured by indentured servants, who were often treated like slaves during their periods of servitude.

Although Colonel Bishop treats his servants better than other planters, he still examines the men as if they were horses, which makes sense since he treats the men like animals, whipping them for the slightest sign of disobedience.

After they win their freedom, Blood and his followers sign articles as buccaneers, pledging to share the money equally, setting out how much will be given for each type of wound. The division of loot after a raid on Maracaibo shows the detailed nature of the articles and the generous payments to injured crew members. Blood and his men become insanely wealthy as pirates but piracy was actually small-scale at the time. The Brethren of the Coast had sacked a number of Spanish ports under Edward Mansfield and his successor Henry Morgan during the 1650s and 1660s but the buccaneering era had ended when Morgan had become deputy governor of Jamaica in 1673 and overseen a ruthless crackdown on pirates. 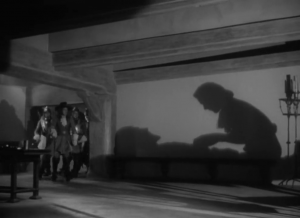 Warner Brothers decided to make a lavish historical drama in reaction to the formation a year earlier of the Legion of Decency, a powerful Christian organization, which campaigned against immorality in films. Warner Brothers had earned a reputation as the gangster studio due to hits with gangster films, especially Little Caesar (1931), The Public Enemy (1931), and I Am a Fugitive from a Chain Gang (1932). Set in the past and in England, not the United States, Captain Blood allowed the studio to present a story about injustice without incurring the wrath of the Legion, which would likely lead to a boycott. The box office success of Captain Blood convinced Warner Brothers to switch its focus to historical dramas and swashbucklers in the next few years, including The Prince and the Pauper (1937), The Adventures of Robin Hood (1938) and The Sea Hawk (1940), all with Flynn. 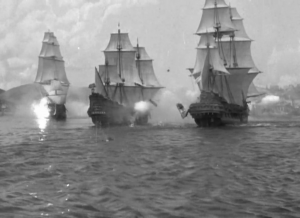 Director Michael Curtiz had already made a number of small movies for Warner Brothers, but the scope of Captain Blood gave him an opportunity to make his mark in the studio in order to get better projects. As a result, he assembled the largest technical crew used in a single film until then. While the impressive sea battles pushed the movie over budget, Captain Blood was quite profitable for the studio.

In fact, the film transformed Errol Flynn and Olivia De Havilland from unknowns into stars overnight. Recognizing their chemistry, the studio would pair them again seven times. It is the first time Flynn and DeHavilland worked together, so their sparring is off. In fact, both actors are a bit stiff. Apparently, Flynn was so nervous at the start of the film that his early scenes had to be filmed again. 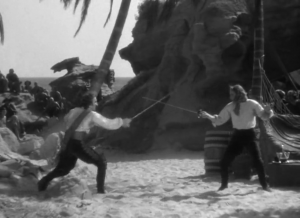 The highlight of the film is the fight between Blood and Levasseur, where they duel with swords and smiles until Levasseur gets a good death scene. I am sure that Basil Rathbone made a valiant effort, but he is simply not very believable as a Frenchman. It is interesting to compare their performances with The Dawn Patrol, which was made a mere three years later. Night and Day.

Despite its importance as an early swashbuckler that launched the careers of Flynn and De Haviland, much of the film is surprisingly dull, especially the ship battles, which largely consist of Flynn shouting orders and explosions.