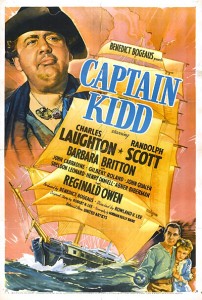 William Kidd had been a privateer in the Caribbean before marrying a rich New York widow and settling down. Hoping to move up in society, Kidd convinced leading English politicians to back him in a venture to hunt pirates in the Red Sea, and the politicians persuaded King William III to permit Kidd and his backers to avoid having captured ships and cargoes processed by the Admiralty, who would take a share, in exchange for the king receiving a share. Kidd was now a very, very junior partner to the most powerful men in England. Unlike most privateers who could attack any ships sailing under an enemy flag, he could only attack the pirates after they had looted a ship. Given these daunting conditions, Kidd unsurprisingly failed to capture any pirates, but he did finally take the Quedagh Merchant, an Indian ship hired by Armenian merchants with a rich cargo and French papers, on January 30, 1698, which was acceptable since Kidd’s commission allowed him to take French ships. Although Kidd was merely the most recent in an endless stream of pirates, including Thomas Tew, Henry Avery, and Robert Culliford, the East India Company was determined to ensure that a famous pirate was hung in London to show the Grand Mughal of India that it was cracking down on pirates. Having gone out of his way to anger many Company officials, Kidd would become a symbol of the pirates. Although he knew that he had been declared a pirate, Kidd decided to clear his name rather than disappear into the colonies with his treasure. Despite his confidence that his powerful backers would protect him, they had lost control of Parliament, and used him as a scapegoat, ensuring that he did not receive information critical for his defence. Convicted of murder and piracy by witnesses who had perjured themselves, Kidd was hung on May 23, 1701.

After destroying the Twelve Apostles, a warship commanded by Admiral Blaine, and killing most of his own crew, Captain Kidd (Charles Laughton) and a few trusted men bury a chest filled with treasure. Sailing to London in 1699, he transforms himself into a gentleman, and meets King William III (Henry Daniell) to discuss the pirates at Madagascar. Claiming that Blaine turned pirate, he asks for Blaine’s lands if he defeats Blaine, so Kidd is sent as a privateer to escort the Quedagh Merchant, which is transporting rich merchants and the English ambassador to the Mughal emperor. The promise of a royal pardon is used to recruit a crew of convicted pirates, including a troublemaker named Adam Mercy (Randolp Scott), who was master gunner for the renowned pirate Henry Avery. Unexpectedly, Kidd’s partner Orange Povey (John Carradine) joins the crew, even though he had been marooned to reduce the number of shares. Meeting with the Quedagh, Kidd uses an excuse to place a bomb in the magazine, and persuades the ambassador to shift with his daughter Lady Anne Dunstan (Barbara Britton) and treasure to the ship. The Quedagh blows up just after they leave and the ambassador soon has an accident. Everything seems to be going according to Kidd’s plan, but Mercy turns out to be Adam Blaine, who has spent the past three years among pirates trying to find out who framed his father. When Blaine discovers that Kidd had murdered his father, the pirate tries to kill Blaine and Anne, leaving them for dead. Returning to London, Kidd meets with King William and tells a good story but Blaine and Anne had got there first, thanks to Avery, so Blaine gets his revenge and the girl.

The script is totally inaccurate but wow, the imagination required to create this plot is impressive.

Although Kidd was hung as a pirate, there is no evidence that he had been a pirate before he started his ill-fated career as a pirate-hunter. A successful privateer, he had married a rich widow in New York and had several children before becoming a pirate-hunter with a commission from the king in an attempt to rise in society. Kidd’s desire to elevate his social standing and his execution are about the only parts of the plot that are correct.

The script misses the opportunity to present the dodgy deal made by the king and the most powerful lords in England, driven by greed. The scandal that followed the genuine Kidd’s capture not only endangered the East India Company’s relationship with the Moghul but led to embarrassing questions in Parliament about the King’s personal involvement with an accused pirate.

In addition, it is worth mentioning that Avery was famous for his record-setting haul at the beginning of his career as pirate. However, the astonishing wealth of the captured cargo ensured that his career ended after taking one ship, since he and most of his crew quickly disappeared to enjoy their ill-gotten loot. Despite a massive manhunt, Avery vanished without a trace.

Although superficially a pirate movie, Captain Kidd is really a fiendishly ambitious confidence scheme. The entire elaborate plan and all of the treachery is intended to give Kidd the huge sums of money required to advance from commoner to lord. Taking his treachery seriously, Kidd even records the names of the men he plans to kill in a book.

Randolph Scott’s stiff nature, and seemingly permanently clenched jaw made him an excellent star for Westerns, and he was already a popular leading man in Westerns by the time he made Captain Kidd. Lacking the necessary charm to play a pirate, Scott seems to have realized his error, since he stuck to Westerns almost exclusively until he retired in 1962.

The action scenes are weak. A duel in the dark between Mercy and Kidd’s partner Jose Lorenzo (Gilbert Roland) fails to excite, and it is hard to imagine Laughton holding his own in a fight with Scott.

Actually, the only scenes that have any life occur when Cary Shadwell (Reginald Owen), the valet, teaches Kidd how to act like a gentleman. While Charles Laughton was hired to play a straightforward if ruthless villain, his portrayal of Kidd is delightful. There is a nice moment in the prison where one of Kidd’s officers wonders if anyone knows them, and Kidd visibly shudders, realizing he might have made a dangerous miscalculation. At one point, he explains his actions by saying “I am not a violent man, people have a habit of getting in my way.” Unfortunately, a few witty comments do not make sitting through the film worthwhile.