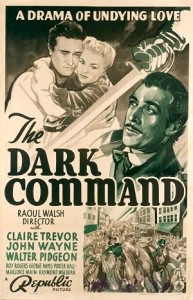 Will Seton (Wayne) works with a traveling dentist, stirring up political arguments to have an excuse to hit people and send business to his partner. They end up in Lawrence, where Will Cantrell (Pigeon) is a gentlemanly school teacher. Both men are attracted to Mary McCloud (Trevor), the daughter of a rich Southerner, who owns the town’s bank.

The town is experiencing a rise in killings, so the leading citizens decide to hire a marshal and the banker nominates Cantrell, while Seton runs for marshal to impress Mary McCloud. Losing the election drives Cantrell over the edge. He forms a gang and liberates slaves whom he then sells in Missouri before switching to gun running, although he maintains his cover identity as a school teacher.

The story turns dark when McCloud’s brother kills a man during an argument over southern chivalry. When Seton refuses to let her brother go, she then turns to Cantrell, whose gang intimidates all of the jurors into voting not guilty. Cantrell wins back McCloud just as the Civil War begins. During the chaos caused by the Civil War, Cantrell’s little gang becomes large enough to start raiding towns. Although Cantrell’s men pretend to be legitimate Confederate guerrillas, McCloud eventually figures out that Cantrell is just a bandit in uniform, who is profiting from the raiding. When Cantrell leads his band to attack Lawrence in order to retrieve McCloud, Seton rallies the townspeople to defend their homes.

Talk about hedging your bets. “Some portions of this photoplay are based upon actual incidents in the lives of its principal characters. All other events and characters are fictitious and any similarity to actual events or persons is coincidental.” It would be more correct to say that a tiny fraction of events depicted in this film have a basis in reality, while pretty much everything else was dreamed up by the screenwriter, who apparently did not actually read any books on the Civil War. Cantrell is clearly based on William Quantrill, an infamous Southern guerrilla leader. The only accurate parts in the story are that Quantrill did lead a raid on Lawrence, Kansas and he was a school teacher at one point in his life.

It is true that weapons had to be smuggled in during Bleeding Kansas because the federal government was trying to check the violence but since the movie is set just before Abraham Lincoln’s election in 1860, Bleeding Kansas would be over by this time. Actually, the story ignores the fighting during Bleeding Kansas. There is a token argument about slavery and whether Abraham Lincoln’s likely election will lead to war but it is treated as a new conflict, not a continuation of an old one. The film does show rabble rousers on both sides trying to raise groups to settle Kansas for their respective side, but none of the violence and intimidation is presented.

According to the screenplay, everyone who fought for the Union and the Confederacy during the Civil War was honorable and there were no guerrillas, just bandits posing as guerrillas who looted happily in Kansas while the soldiers were busy fighting the war. While it is true that the guerrillas rode rings around the Union soldiers and did attack towns, there were sizeable Union forces in Kansas and Missouri. In the movie’s version of the Civil War, there were no Union troops, just militia units. Most important, the eight months where Jayhawkers raided and looted in Missouri to their hearts’ content simply did not happen.

Quantrill is infamous for the raid on Lawrence on August 21, 1863 where 185 unarmed men and boys were massacred in a four-hour-long frenzy of killing and looting that left the town a smoking ruin. The fictional Cantrell attacks the town but the outcome is drastically different.

Although the film is bascially a collection of historical inaccuracies, one of the most glaring deviations from reality is the description of John Brown as a slave runner. The real Brown was an abolitionist zealot who was executed after seizing a federal armory in Virginia in the insane hope that it would inspire a massive slave rebellion.

Wayne is quite charming as a nice, well-intentioned but not too bright man, while Trevor is excellent as a bossy, self-confident, classy woman. Although Pidgeon is a good actor, he was horribly miscast, since he was 43-years-old when the movie was made, while Quantrill was 25 when he raided Lawrence, and he was several years older than the majority of the guerrillas. John Ford’s Stagecoach (1939) had brought Wayne out of a nearly decade-long purgatory of B-movies but he was still under contract to Republic Studio, where he had been playing the lead in its Three Mesquitteers series for kids. Dark Command was Republic’s most expensive movie at the time and Wayne had become a more confident actor. His performance proved that the success of Stagecoach had been due to more than being blessed with an excellent director and supporting cast.

While the movie is entertaining and surprisingly dark for 1940, it completely airbrushes the savagery that made the fighting in the Missouri-Kansas region a particularly brutal part of the Civil War. Along with Santa Fe Trail, which was made the same year and also deals with Bleeding Kansas, the film attempts to paper over the deep divisions that had caused the Civil War in an effort to unite northerners and southerners as the United States seemed increasingly likely to enter WWII.