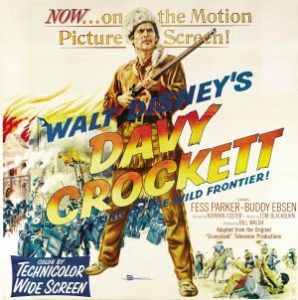 Growing up in poverty, the adult Crockett failed to make a living as a farmer before serving in the Creek War (1813-1814). Although he constantly moved to find better land, he hated farming and never succeeded as a farmer. In 1821, he ran for a seat in the state assembly and found that he was a natural politician. His first run for Congress failed, but he succeeded the second time because property restrictions had been removed, enabling all white men to vote, and most of the new voters backed Crockett. Winning his second race by a significant margin, he attracted national attention. Initially a supporter of President Andrew Jackson, but he gradually became disillusioned, and he was the only member from Tennessee to vote against Jackson’s Indian Removal Act, even though he knew that his constituents were in favor of it. The Jackson camp responded with an unpleasant campaign, and Crockett lost by a narrow margin. Crockett’s defeat bothered him, since he had only been taken seriously in Congress. However, a play and books about him were hugely successful, so when he ran again he won a narrow victory. It was a timely victory, since the Whigs were looking for someone to run against Martin Van Buren, who looked more like a Whig than most whigs. The winter in Washington was spent writing his autobiography to ensure that he received income from stories about his life. The book sold well, but it was not enough to end all of his debt. Crockett’s opponent in the next congressional race was openly backed by Jackson and Polk, and people had realized that he had not actually accomplished anything for his district. It was a close fight but he lost, which ended any hopes for the presidency. Hoping to start again, he decided to go to Texas and explore his options, both in land speculation and politics.

Davy Crockett (Fess Parker) and his sidekick George Russell (Buddy Ebsen) are scouts under General Andrew Jackson (Basil Rysdael) during the Creek Indian War in 1813. After guiding Jackson’s army to defeat the Creeks, Crockett then tracks down Chief Red Stick (Pat Hogan) and beats him in single combat. After a winter, Crockett becomes restless, so he and Russell travel to a new territory, where they find that Bigfoot Mason (Mike Mazurki) is running Indians off their land and selling the land to newcomers. Angered by the bully’s actions, Crockett becomes magistrate and then beats Mason in a fight, before arresting him. The grateful community nominates Crockett for the state legislature. Since dime novels have made him famous, Jackson convinces him to run for Congress, and become part of his political circle. Unwilling to blindly follow Jackson’s orders, Crockett argues against the president’s Indian Removal Bill, which would break a treaty just to gain more land for the settlers. Aware that his political career is over, he leaves Washington, and goes to Texas with Russell because Americans are in trouble since Santa Anna has threatened to crush independent Texas. Along the way, they pick up Thimblerig (Hans Conreid), a gambler fleeing arrest, and then save Busted Luck (Nick Cravat), a Comanche who was hurt while stampeding buffalo. James Bowie (Kenneth Tobey) came down with a fever after he was hurt helping to move a cannon, so William Barrett Travis ( Don Megowan) runs the defence of the Alamo, and they stay even though they learn there will be no quarter.

To my pleasant surprise, the movie is relatively accurate, at least compared to the other films on the Texan Revolution that I have watched recently.

The screen Crockett is the head scout with Andrew Jackson’s army, and helps Jackson inflict a major defeat on the Creeks. Crockett then leads the volunteers to go home because their 60 days ended a while ago, and Jackson refuses to force them to stay. After a quick visit to his family, Crockett and Russell go back. Jackson is in New Orleans, but Crockett finds Chief Red Stick in the swamps of Florida, where he beats him in a fight, then convinces him to give up, sign a treaty and live on his own lands, which makes one wonder why Red Stick started fighting in the first place.

The real Crockett did take part in the Creek War in Alabama,but he did not play as prominent role as shown in the film. After taking part in two battles, Crockett was among the hundreds of men who left shortly before their ninety-day enlistments ended because they were starving, despite Jackson’s mix of charismatic appeals and threats. After a month, he re-enlisted to earn more money and found himself a sergeant of scouts, assigned to keep an eye on the Creeks while Jackson dealt with the British at New Orleans. Once again, Crockett mainly battled starvation and left a month before the end of his six-month enlistment.

Sadly, the Creek War had a much harsher ending than the peaceful resolution depicted in the movie. The Creeks had fortified Horshoe Bend, the only access on a 100-acre wide peninsula, with a zig zag breastwork so that every direction of attack would face a crossfire. The initial assault was stalled until ensign Sam Houston led a charge that broke through, although he was badly wounded. The slaughter that followed eliminated the threat of the Creek nation and ended the war. More than eight hundred Red Stick warriors died and another two hundred escaped by swimming across the river and making their way to Spanish Florida. Furthermore, they were forced to surrender half of their land, roughly three-fifths of Alabama and one fifth of Georgia, which even included the territory of Creeks who had fought with the Americans.

Shortly before he runs for state legislature, Crockett learns that his wife has died and his sister-in-law is caring for his children. This is a nice way of explaining why he kept roaming, better than the truth that his wife had moved with the children to live with her family when he lost his campaign for a third term in Congress. There does not appear to have been any bad feeling, she just seems to have become fed up with an absent husband who was always away, either in Washington or hunting bears.

The screen Crockett wins his first election by making a short speech and then inviting everyone to have a drink since his opponent plans a lengthy speech, which captures the relaxed nature of frontier campaign. Still, I wish the film had shown the real man’s trick of offering every potential voter a shot of whiskey and then a bite of chewing tobacco, thus ensuring that when they parted, the voter had a favorable impression of him.

When the fictional Crockett agrees to run for Congress, he states that he will be his own man, and tells Jackson that he has already made mistakes, but Jackson swears that the nation needs to expand. Later, Jackson’s aide and Crockett’s former superior Major Tobias Norton (William Bakewell) arranges for Crockett to do a speaking tour as preparation to run for president, since Jackson is in his second term. It turns out that Norton had sent him out of DC so he would not be there to vote against Jackson’s Indian Removal Act. Arriving just in time, as a weary supporter is finishing his filibuster, he argues against breaking the treaty to gain more land for the settlers, even though he knows it will be the end of his political career.

While the real Crockett did think about running for president, he was encouraged by Jackson’s opponents, the Clay-Adams faction. The script avoids directly blaming Jackson for end of Crockett’s political career, but the president does not receive a favorable portrayal. Actually, Crockett’s career ended when he lost re-election, although his defeat was largely due to Jackson’s support for his opponent. Since it is a Disney movie, it does not have his famous farewell to his constituents, “you can go to hell, I am going to Texas.”

Arriving in Texas, the fictional Crockett thinks that it is big enough even for him. The idea that Crockett could not settle down because he was restless has some basis, but completely ignores the fact that he hated farming and his desire to get rich through land speculation. In fact, a similar thirst for easy money motivated many of the leaders of the Texan Revolution.

The script seizes every opportunity to show that Crockett was a zealous defender of Indians, and even gives him a Comanche sidekick at the Alamo, Busted Luck, played by Burk Lancaster’s frequent co-star Nick Cravat, wearing a bucket of body paint. Like all of Cravat’s roles, Busted Luck speaks only in sign language because he was unable or unwilling to lose his thick Bronx accent.

BUFFALO!!!!! Seriously, I am impressed that the producers made the effort to show a herd of buffalo.

Initially, three episodes that were shown as the Disney television miniseries Davy Crockett, the movie presents Crockett as a frontiersman, congressman and one of the defenders of the Alamo.

Honestly, I was surprised, it’s not bad. Fess Parker even sings a nice song. The movie is better than most movies on the Alamo, and it shows the full scope of Crockett’s eventful life. Crockett became America’s first folk hero while he was still alive, and he was one of the first to campaign by pointing out that he was a common man fighting against the elite. No disrespect to Fess Parker, but Davy Crockett deserves a limited series that examines his role several pivotal events in American history.