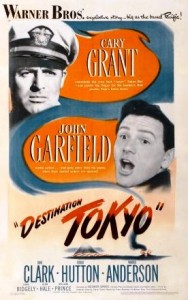 The submarine USS Copperfin, commanded by Captain Cassidy (Cary Grant), sails from San Francisco with secret orders to be opened at sea. The submarine’s mission is to pick up Lieutenant Raymond (John Ridgely), a meteorologist, near the Aleutians and then sail to Tokyo Bay. While meeting Raymond, the crew shoot down two Japanese planes, but lose a crewman. Although the entrance into Tokyo Bay is protected by nets, the sub waits until the nets open for a returning warship, and then follows it inside. Once they are in the bay, Cassidy explains that their mission is to provide information on the weather and the shipping in the bay for the Doolittle Raid. Raymond and two members of the crew are landed near Tokyo to take weather readings, and return to the sub the following night. When the planes bomb Tokyo, the sub is able to escape in the confusion.

If the plot of the movie sounds far-fetched, that is because it is. Two U.S. submarines, the Thresher and the Trout, were ordered from their base at Midway to cruise in the area that would be covered by the carrier group transporting the bombers. Surviving two encounters with Japanese warships, the two submarines were able to report to headquarters at Pearl Harbor that there were no enemy ships blocking the path of the carrier group. Presumably, someone at Warner Brothers studio heard rumors of the two submarines’ involvement in the Doolittle Raid and concocted a more exciting story. To be fair, it is quite imaginative.

While the mission is entirely fictional, the attention to detail is impressive, since the script is based on a story by a former submariner, Steve Fisher. At one point, the sub descends rapidly to avoid a potential air attack, and the movie portrays the crew’s feeling of helplessness that occurs when the sub is too deep to use the periscope. Sonar was not the most precise instrument but it could distinguish between different sizes of ships. However, it was blind against planes.

The screen sub sinks two Japanese warships, but in reality American submarines were handicapped by unbelievably ineffective torpedoes, and repeatedly failed to sink enemy ships. During pre-war training, torpedoes were intentionally fired underneath the targets to preserve the expensive weapons for re-use. Examiners only checked that the torpedoes travelled in a straight line, not the depth, which proved to be a major error during the war, when torpedoes often went underneath the enemy ships, especially since crews had trained with lighter, unarmed torpedoes. Worse, the navy’s supply of torpedoes at the beginning of the war was tiny, and production was an insignificant 60 per month in early 1942, so captains were pressured to use torpedoes as sparingly as possible, regardless of the target. The submarine captains were understandably irate that they had risked the lives of their crews to get close enough to sink an enemy ship only to discover that the torpedoes ran too deep. The Navy’s Bureau of Ordnance strongly resisted criticism of the torpedoes, even after tests performed by Admiral Chester Nimitz’s command demonstrated that the torpedoes ran ten feet deeper than intended. After a torrent of complaints from frustrated submarine captains, the bureau finally introduced a proper depth control device in the fall of 1942.

Although torpedoes finally started hitting enemy ships, another problem appeared. The magnetic exploder proved to be too sensitive, detonating fifty feet away from the target. When furious submarine commanders discovered the problem and deactivated the magnetic exploder, relying on the simpler contact pistol, they found that many of the torpedoes would not explode because the firing pin of the contact pistol hit with too little force to cause detonation. The majority of the problems had been ironed out by the fall of 1943, but far too many captains had lost their commands for poor records, or far, far worse, were revealed to enemy escort ships and then left defenceless.

Director Delmer Daves’ debut, the story moves quickly and creates a tense atmosphere. There are several stand-out scenes, including the one where the sub follows a cruiser into Tokyo Bay, and the director alternates between the increasingly tense crew, dependent on the sonar to know what is happening, and exterior visuals to show the audience what is happening. In fact, the underwater photography is excellent, and was presumably done with models, since the navy’s ships were busy fighting the war. Every submarine movie needs a depth charge scene, and Destination Tokyo delivers with a climax where the crew suffers three hours of brutal hammering by depth charges, until they finally sink the destroyer.

Although unnecessary romantic subplots are thankfully absent, several scenes examine the difficulty of being separated from their families, especially a painful scene where the crew listens to a record from a dead seaman’s wife.

The film ends with real footage of the bombers taking off from the carrier, footage which was filmed by a unit commanded by famous director John Ford, an officer in the naval reserve, who became head of a photographic unit that made documentaries for the navy.

It takes half the movie to get to Japan, and while it is interesting to view the crew’s lives, far too much of that time is spent listening to Wolf (John Garfield), one of the sailors, tell stories about meeting women. As the co-star, Garfield was given a considerable amount of screen time, even though his role was relatively minor. Garfield had enlisted, but had been rejected due to a heart condition, so Warner Brothers wanted to use him as much as possible since he was one of the biggest stars left in Hollywood.

While the sailors are eager to kill as many Japanese as possible, the script takes the bold position that the Japanese are not inherently evil. After a Japanese pilot stabbed the sailor who was trying to help him, Cassidy explains that the pilot had been raised to fight, and was given his first knife when he was five, unlike an American five-year-old who would receive roller skates, so they are fighting the war to end the Japanese system, not the Japanese people, who have been brainwashed. This open-minded approach may make the movie more acceptable today, but the script was one of the reasons why screenwriter Albert Maltz was called in front of the House Committee on Un-American Activities in 1947, thus becoming one of the Hollywood Ten, who were blacklisted by the studios.

Despite the implausible plot, Destination Tokyo is worth watching for the brilliant underwater photography, taut action, sharp direction, a terrifying depth charge scene and impressive attention to detail.