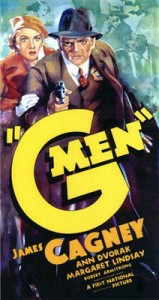 During the early 1930s, outlaws rampaged across much of America, seemingly robbing banks and kidnapping at will. Some of the more famous of these outlaws were Baby Face Nelson, Pretty Boy Floyd, Bonnie and Clyde, and Alvin Karpis and the Barkers, but John Dillinger was undoubtedly the star. A wave of celebrity kidnappings and the murder of four law enforcement officers in Kansas City in June 1933 during a botched attempt to rescue a veteran bank robber made it clear that a national police force was required. Local police were forbidden to cross state lines, so the FBI was an obvious candidate for this national police force. However, it had to pass through a steep learning curve since it was under-funded and its agents were not originally allowed to carry guns. The Public Enemy Era lasted from 1933 to 1935, although Karpis, the last holdout, evaded capture until 1936.

Attorney James “Brick” Davis (James Cagney) joins the Department of Justice after his friend is shot from behind while arresting a counterfeiter. Learning of Davis’ decision, “Mac” MacKay (William Harrigan), the nightclub owner/racketeer who had bankrolled Davis’ legal education, announces that he will quit rather than be investigated by his protege. Possessing an independent nature, Davis has trouble adapting to the training, especially after he falls for Kay McCord (Margaret Lindsay), the sister of his superior, Jeff McCord (Robert Armstrong). Meanwhile, MacKay’s successor Danny Leggett (Edward Pawley) and his mob leave New York to start a crime wave in the mid-west. Agent Hugh Farrell (Lloyd Nolan) and several police officers capture Leggett, but they are ambushed at the train station by the rest of the gang, led by Brad Collins (Barton MacLane). The national outcry enables the head of the FBI to persuade the government to make kidnapping a federal crime and to arm the agents. Placed in charge of the investigation, McCord relies on Davis’ familiarity with the gang to make several arrests until the agents finally trap the gang at an inn.

The film presents several key events of the Public Enemies Era but does not include any of the actual Public Enemies. Intended to reassure the public that the FBI could protect society, the script makes a single gang responsible for the entire crime wave. The real FBI agents wished that they were dealing with a single gang. Given the massive news coverage of John Dillinger, Baby Face Nelson and Bonnie and Clyde, the movie probably only reassured people who did not read newspapers.

Moreover, the idea that a gang of bootleggers would leave New York City to start robbing banks in the mid-west is laughable. In fact, it is never explained why Leggett and the members of his gang decided to abandon their cozy rackets in the city to live on the run as bank-robbers. Hm, since Leggett’s gang had been big racketeers in New York, the destruction of the gang not only ended the crime wave, but also cleaned up the city. Impressive.

Unlike the white-washed reality presented by the film, the gangs that dominated the illegal alcohol business during Prohibition were usually drawn from ethnic groups, primarily Italian, Irish or Jewish, and they did not rob banks. Even after Prohibition was repealed in 1933, the gangs stayed away from robbing banks because it attracted too much attention. Instead, they relied on extortion, prostitution and the manipulation of municipal contracts for revenue. Their main involvement with the bank robbers was providing safe havens and fencing the stolen money.

Learning that Davis is a lawyer, McCord, a veteran agent, complains that the department needs former policemen, not law graduates. Actually, J. Edgar Hoover, the acting director of the FBI, wanted motivated, young men with law degrees, and resisted hiring law enforcement officials experienced with firearms until after the humiliation at Little Bohemia. Oddly enough, Hoover never appears or is even mentioned in the film.

The scene where four policemen, including Farrell, are ambushed at the train station and Leggett escapes is modeled on the Kansas City Massacre, a failed attempt to rescue bank robber Frank Nash that resulted in the deaths of four lawmen and Nash. The massacre focused attention on the need for a federal police force, since most states lacked a statewide police force, and those that did were not permitted to cross state lines. Local police forces were on their own, since bank robbery was not a federal crime. Declaring War on Crime on June 29, 1933, less than two weeks after the Kansas City Massacre, Attorney-general Homer Cummings increased the power and budget of the Bureau in order to create a federal police force to cope with the wave of kidnappings and bank robberies. Previously unarmed, agents were issued guns.

Acting on a tip from Davis’ old girlfriend Jean Morgan (Ann Dvorak), who has married Brad Collins, the new leader of the bank robbers, that the remainder of the gang have taken over McKay’s inn in Wisconsin, a large force of agents surround the inn. The gang has about ten men, so there is a big shootout, but the agents’ training and superior marksmanship enable them to wipe out most of the gang. The raid on Collins and his men in the inn in Wisconsin is based on the shootout at Little Bohemia, when FBI agents attempted to capture John Dillinger, who was working with Baby Face Nelson and several other outlaws. However, the well-organized operation in the film is in stark contrast to the amateurish reality. As soon as the real agents reached the lodge, three men jumped into a car and drove off. Faced with the humiliation of seeing Dillinger escape yet again, the agents started firing when the driver did not obey their order to stop. When the bullet-riddled car came to a halt, the agents discovered that they had killed one man and wounded two others, but they were men from a nearby federal work camp, not outlaws. Unknown to the agents, the gang escaped during the confusion, and the Battle of Little Bohemia soon became a national scandal.

The distorted view of history reaches its peak when one of Leggett’s men warns McCord that there will be another massacre if he takes Leggett to the penitentiary. The outlaws’ priority was avoiding police attention.

Even though the movie was made in 1935, an opening scene was added in 1949 to celebrate the 25th anniversary of the FBI.

Warner Brothers had gained a reputation as the gangster studio, but the formation of the League of Decency in 1934 led the studio to change. Captain Blood (1935) was set in the past to avoid social commentary but G-Men was clearly designed as an apology for previous gangster films, such as Little Caesar (1931) and The Public Enemy (1931). Rather than glorify gangsters as strong men living according to their own rules, G-Men presents the risks faced by the law enforcement officers who protected society. To reinforce the shift towards law and order, James Cagney gave a much more restrained performance than his previous roles. While the intent was laudable, the lack of both energy and historical accuracy means that the film is only for Cagney fans.