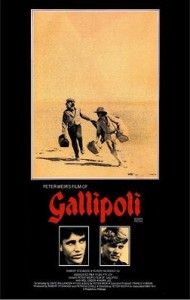 When WWI started, the German army had nearly reached Paris when a counter-attack caught it over-extended and it was forced to retreat. After a month and a half of desperate fighting, the Allies and the Germans built lines of fortifications that stretched across Europe from Switzerland to the Belgian coast. These lines would change little during the next four years. Hoping to knock Germany’s ally Turkey out of the war, First Lord of the Admiralty Winston Churchill proposed that a fleet of obsolete British and French battleships shell the Turkish fortresses on the Gallipoli Peninsula protecting the southern entrance to the Dardanelles. When half of the fleet was either sunk or badly damaged on March 18, 1915, the War Council decided to make an amphibious assault on the peninsula. Lacking an efficient logistics system, the Ottoman army was ill-suited for offensive actions, but the Turkish soldiers would prove to be tenacious defenders. 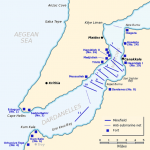 80,000 British, French and Anzac troops were assigned to the landing, which took place on April 25. Turkish units prevented the Anzacs from breaking out of their beachhead, while the British landings at Cape Helles produced mixed results. The Turks eventually pulled back and formed a defensive line across the peninsula. Both sides threw more and more men into the fighting, which soon resembled the trench warfare on the Western Front. The failure cost Churchill his position at the Admiralty but Secretary of State for War Horatio Kitchener persevered until he visited in November and saw that 5,000 men were becoming incapacitated with dysentery each week, and the entire force had been evacuated by January 9, 1916.

In May 1915, Archie (Mark Lee) is a stockman (rancher) and rising young sprinter in Western Australia. He wins his first race, beating Frank (Mel Gibson) who had bet his savings on himself. Archie wants to enlist, but he is underage, so he and Frank make their way to Perth, having instantly become mates. Broke, the two men end up walking across a desert. After Frank prepares a fake birth certificate, Archie is accepted by the Light Horse, while Frank enlists in the infantry with several mates from a previous job on a railroad. Later, Frank and Archie are re-united in Egypt, and Archie arranges for Frank to transfer into the Light Horse. When the training ends, both the Light Horse and the infantry are sent to Gallipoli, where the Allied force is struggling to break through the Turkish defences.

While Gallipoli captures the static danger of trench warfare, the Gallipoli campaign is only shown during the last third of the movie, which is not enough time to properly portray the dismal futility and the disturbing waste of life.

However, the script conveys the mood at the beginning of the war, where a mixture of patriotism, boredom, thirst for adventure and a desire to stick with their mates drove thousands of young men to enlist. In particular, the movie shows how people believed the wartime propaganda without question. Archie collects clippings of newspaper accounts of the Gallipoli campaign, which fuels his desire to join the army. Possessing a more cynical nature, Frank does not want to enlist, and comments that it is not their war, it is an English war. In fact, Frank’s Irish father is stunned that his son would fight for the English, who had executed his grandfather. One scene starkly illustrates the blind patriotism that drove so many young men to enlist. When the pair meet a man in the desert, who had never heard of the war, Archie is unable explain how it had started, just that it is Germany’s fault and they need to fight or the Germans will be in Australia, but is at a loss to say how exactly the German army will cross the Pacific.

Brought to Gallipoli, the Australians soon discover that the campaign is bogged down in siege warfare. The Turks are never seen, except for prisoners captured during earlier fighting, but the new arrivals soon learn that it is death for anyone who shows his head above the trench.

After showing the daily grind of life at Gallipoli, where the Anzacs are literally dug in on the side of a cliff, the only battle of the movie takes place. The Australians will attack the Nek as a diversion while 25,000 British troops attack at Suvla Bay. The plan is to break out of Anzac Cove and hopefully capture Constantinople within a week. The initial attack is made by the infantry, so Archie and Frank simply hear machine gun fire and then see an endless line of wounded, including Frank’s friends.

The Gallipoli Peninsula is a rocky, hilly formation criss-crossed by gullies and ravines, so the Light Horse fought as infantry. Their attack was scheduled to take place immediately after a bombardment, which was expected to drive the Turks out of the trenches and into the bunkers. Unfortunately, a mistake in timing causes the battalion commander to accidentally delay the attack, which enables the Turks to return to the trenches before the attack starts. The first wave of Australians are slaughtered, covering No Man’s Land with corpses, but the colonel refuses to cancel the attack. Serving as a runner, Frank is sent to the brigade HQ, which agrees to pause the attack, since the British have already safely reached Suvla Bay, but the regimental commander had already ordered the battalion commander to continue with the attack, which starts just before he gets back. Everyone had left prized possessions or letters attached to bayonets stuck in the sand bags before going over the top.

Since Frank is a battalion runner, viewers get to see the battalion, regimental and brigade HQ through his eyes. Dismissing the opinion of the battalion commander, who is actually in the trenches, the regimental commanding officer only cares about achieving his targets, even though he can not actually see the enemy, and receives all of his information through the telephone, which typifies the callousness that was far too common among commanders and caused so many casualties.

Since it is an Australian movie, the British officers are described as drinking tea at Suvla Bay, even though they were not. But that is not important. The battle scene is accurate, the tragedy did happen, but the screenplay fails to show that the generals repeatedly threw men at the Turkish trenches, so the soldiers were repeatedly mown down trying to gain metres of territory, exactly like the Western Front, even though the selling point of the Gallipoli Campaign was that it would not be like the Western Front.

The climatic battle is based on the Battle of the Nek on August 7, 1915, which was part of a failed attempt to break through the Turkish defensive lines from Suvla Bay. The scene is a remarkably accurate depiction of the battle. While the battle was a horrendous waste of life, sadly it was only one of the many examples of stupidity that made Gallipoli infamous.

Gallipoli is actually two movies: a buddy movie that takes place in Australia during the early months of WWI, and the Gallipoli Offensive, which was too complex to be explained in the last third of the film.

Although the movie is divided into two parts, the story never seems rushed. The trek across the desert is given enough time to let the viewers feel Mark and Frank’s exhaustion and fear that they will die.

The buddy story in Australia and the Gallipoli campaign are separated by a lengthy interlude in Egypt, where the Australians are sent for training.

After enlisting in the infantry, Frank and his mates are next seen in Cairo in July 1915 playing rugby in front of the pyramids, which is fitting since everyone still viewed the war as a game. Children selling fruit follow the soldiers everywhere during the training and even sell fruit to men who are pretending to be dead during a practice skirmish.

Like almost every Australian war movie that I have seen, the British are not shown in a favorable light. On leave, Frank and his friends refuse to salute a pair of British officers, who seem to have been drawn from a Monty Python skit. The Australians even mock the officers’ monocles; understandably since monocles score pretty high on the silly-o-meter.

When director Peter Weir visited the battlefield at Gallipoli, the trenches were still there, since the area was a military region, so the battlefield was littered with stuff that had been left behind by the soldiers. The movie was filmed in South Australia because the production team found a cove that matched the real Anzac Cove, which actually was quite small, that is why it was so crowded.

Hm, I should mention that the film helped make Mel Gibson a star, but everyone knows that it was The Road Warrior, which came out the same year. Damn, that was a cool movie. Hope that Fury Road does not suck.

Jean Michel Jarre’s electronic score during the racing scenes is not unpleasant but it is really out of place.

Examining the loss of innocence in Australia during WWI, Gallipoli is not a movie with beautifully choreographed battles or gritty action scenes, just a brutal look at men sent to die far from their homes in a pointless campaign.