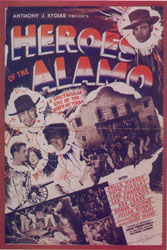 When Santa Anna (Julian Rivero) suddenly closes the border with Mexico, forbidding further emigration from the United States to Texas, some colonists call for a revolution, but Stephen Austin (Earle Hodgins) organizes a convention, which votes to send him to Mexico City to lobby for statehood, not independence. A year after the convention, everyone wonders what happened to Austin, unaware that Anna had thrown him into prison. Tensions continue to rise in Texas until a few colonists raid the Mexican fort at Anhuac in April 1835, and William Wharton (Jack C. Smith), a fiery independence advocate, rallies the colonists to fight. Having put down a rebellion in another state, Anna releases Austin, but also sends more troops to restore order in Texas. The Mexican troops encounter unexpected resistance at Gonzales and are driven out of Texas. Three months later, Austin and Wharton depart for the US to lobby for aid. Austin leaves William Barret Travis (Rex Lease) in charge, supported by Jim Bowie (Roger Williams), repeatedly stating that they must hold Bexar (the location of the Alamo) until general Sam Houston can raise an army, since the garrison is the only one that blocks the road to the settlements. Everyone thinks that the war is almost over, but Davy Crockett (Lewis Chandler) shows up with a few friends looking for a fight since he had lost his bid for re-election to Congress. Suddenly, Santa Anna arrives with an army, giving the defenders just enough time to fortify the Alamo.

The script gives a very one-sided presentation of the events leading up to the Texan Revolution. Early in the film, William Wharton complains to Austin that the Mexican government has broken its promises of free immigration and no taxes. Instead, the border has been closed and Anna has sent soldiers to collect taxes.

It is true that the colonists were furious about these issues, but the script misleads the viewers. No promises were broken. Worried that unrestrained American immigration would result in the transformation of the state into an American colony, the Mexican government passed a bill on April 6, 1830 that authorized the construction of military posts in Texas in order to collect customs duties. Moreover, it banned further American immigration, but encouraged colonization by Europeans and Mexicans to counter the growing Anglo control of Texas. The movie shows that the Mexican government’s closing of the border prevented the reunion of families, intending to create sympathy for the colonists among the audience. Actually, the decision to ban further immigration directly impacted the settlers’ plans to become wealthy, not reunite with relatives. They had based their original decision to emigrate to Texas on the belief that they would be followed by more settlers and their lands would greatly increase in value when the area became civilized. Instead, the area would remain a frontier. Moreover, this law did not stop Anglo “wetbacks” from crossing the border at will, and the population of Texas continued to grow despite the closed border. Austin’s colonists had been granted a seven years’ exemption from customs, but the colonists had hoped that the exemption would become permanent. Refusing to pay customs, many colonists resorted to smuggling, which raised tensions since the smugglers often fired at the Mexican soldiers.

After waiting for a long time, Austin finally meets with Anna, who reveals that he does not want to make Texas a state because it is too close to the US. Arriving during a cholera epidemic, it took the real Austin five months to arrange a meeting with Santa Anna, who eventually agreed to permit trial by jury, revision of the tariff and repeal of the immigration law, but refused to allow a completely separate state constitution, since Texas had half of the minimum 80,000 people required for statehood. Unfortunately, Austin had lost patience during the five months and had written a letter to the local government in Texas recommending self-government. The letter fell into the hands of Mexican officials and Austin ended up in jail, where he remained for the next 18 months.

One major cause of conflict between the colonists and the Mexican soldiers is not even mentioned in the movie. The majority of colonists came from southern states, where the use of slave labor was common, but they discovered that slavery was illegal in Mexico. Although some colonists simply made their slaves sign 99 year-long indenture contracts, many slaves fled to Mexican forts seeking freedom, and were pursued by angry owners demanding the return of their property. However, the confrontations between Mexican soldiers and slaveowners has been ignored.

The above-mentioned changes to the historical record were made to present the colonists in a favorable light, but the script makes the odd decision to have Travis decide at the last minute to move the garrison to the Alamo after Almaron Dickinson (Bruce Warren) points out that it would be easier to defend. They immediately fortify the Alamo when Anna appears. Furthermore, the conflict between Travis and Bowie over command of the garrison does not appear in the film. Instead, the screen Travis is decisive, and Bowie listens respectfully.

Despite the repeatedly stated importance of the garrison, Travis receives a mere 30 reinforcements, grumbling that the government had sent 500 men to invade Mexico instead of listening to Houston. While it is true that no one listened to Houston, it is unfair to blame the government, since no one listened to it either. The script fails to mention the garrison of 400 Texans at Goliad, but roughly 100 men did invade Mexico. Following the surrender of the Mexican troops in the Alamo, the rebels had won control of Texas. Believing that the Mexicans would not be able to retaliate until spring, the senior rebel leaders began arguing over who was in charge. Dr. James Grant, one of the greediest land speculators, was able to convince the majority of the men at the Alamo to march on the port of Matamoros, where most of his holdings were located, even though it was outside of Texas.

More important, the Alamo had little military value. Anna could have easily bypassed the garrison but he used the Alamo as bait, hoping to lure Houston into a battle where his smaller army would be crushed.

Unlike most films on the Alamo, it focuses on the Dickinson family, rather than Davy Crockett or Jim Bowie. Dickinson is a good choice since he fought in the Battle of Gonzales, which started the Texan war for independence. There is a nice banter between Almaron and his wife Anna (Ruth Findlay), but the age gap between the real couple was much greater. Susannah Dickinson had married Almaron when she was fifteen-years-old and he was fourteen-years-older.

The producer had made the silent film Davy Crockett at the Fall of the Alamo in 1926, and he re-used footage from the battle scenes in the new version, even though there was a new cast. The switch to the silent footage is jarring, but it is the least of the movie’s problems. It is simply a bad movie. The acting is stilted, as if the actors have not adapted to sound. Even for the time, this is horrible, almost incompetent.