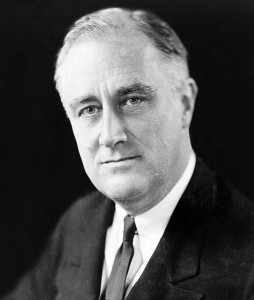 Franklin Delano Roosevelt (FDR) (January 30, 1882-April 12, 1945) won election as president of the United States a record four times, although he died shortly after his fourth term had started. He oversaw the repeal of Prohibition (1920-1933); presided over the New Deal, a radical series of economic reforms that provided relief for the unemployed, helped the economy recover, and reformed the financial system; guided the nation out of the Great Depression (1929-1939); led the United States through WWII; and helped found the United Nations. However, there has been a great deal of criticism of FDR on a wide range of issues, including: his New Deal attacked the capitalist system by expanding the welfare state; his decision to seek first a third term and then a fourth term indicated a desire to become a dictator; he was soft on communism in the United States during WWII; dragged the nation into war by provoking Japan into attacking; and abandoned eastern Europe to the tender mercies of the Soviet Union.

Regardless of whether one has a positive or negative view of him, FDR was a pivotal president. However, he has received little attention from Hollywood.

Sunrise at Campobello (1960), the sole movie devoted to FDR, deals with the sudden attack of polio in August 1921 that crippled him, and his struggle to recover. It was not a big hit at the time, and has since faded into oblivion. While it is undoubtedly a heart-warming film, the story takes place during a time when FDR was still a rising politician, who had not even run for governor of New York, never mind the presidency.

Aside from Sunrise at Campobello, FDR has been relegated to cameo appearances, and here are the most recent portrayals:

J. Edgar (2011)
One of several presidents blackmailed by FBI Director J. Edgar Hoover, FDR is off-camera, and only his voice is heard, greeting Hoover during their first meeting.

Jon Voight played FDR in Pearl Harbor (2001), a film about the Japanese attack on Pearl Harbor that brought the United States into WWII, and he is involved in two scenes: a recreation of FDR’s Day of Infamy speech, made shortly after the attack; and a meeting with his cabinet where he single-handedly shames the chiefs of staff into planning the Doolittle Raid on Japan. Given the fact that the United States had just experienced a devastating surprise attack, little of FDR’s famous charm appears in Voight’s portrayal.

Dan O’Herlihy played FDR in MacArthur (1977), the biopic of famous American general Douglas MacArthur. There are two lengthy scenes when the two men met at Pearl Harbor to discuss the Pacific offensive against Japan during WWII. It is probably the best of the cameos, since O’Herlihy captures FDR’s charm and manages to hold his own against Gregory Peck, who played MacArthur.

Clearly there is a need for a more in-depth look at FDR, so Hyde Park on the Hudson will be interesting. 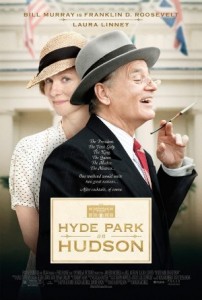 Hyde Park presents the weekend when King George VI and Queen Elizabeth stayed at FDR’s private estate after attending the 1939 New York World’s Fair as part of a goodwill tour. The visit itself was ceremonial, intended mainly to deepen American sympathy for the British, in particular to oppose isolationist sentiment, but the experience enabled FDR to forge closer relations with the British government. More important, the movie presents FDR at his prime. Justly famous for his winning personality, FDR was confident that he could charm anyone, and his track record was admittedly impressive until he encountered Josef Stalin.

After becoming famous for his manic humor in Caddyshack (1980), Ghostbusters (1984), and Groundhog Day (1993), Bill Murray proved his acting range by playing serious, restrained roles in movies like Rushmore (1998), The Royal Tenenbaums (2001), Lost in Translation (2003) and Broken Flowers (2005). Hyde Park on the Hudson gives Murray the perfect opportunity to unleash his manic side in a serious movie. Judging by the trailer, it appears that Murray has captured FDR’s incomparable charm, but it seems unlikely that FDR’s love of telling Darky jokes will appear in the film.

Actually, I am looking forward to this movie. Director Roger Michell first became known for Notting Hill (1999), which I enjoyed despite the presence of Julia Roberts and her unnaturally large mouth, while Morning Glory (2010) was a surprisingly fun movie.