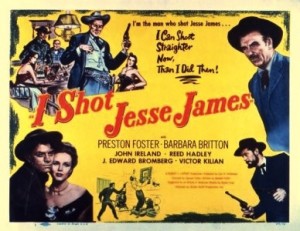 The story takes place near the end of Jesse’s life when he was living in St. Joseph, Missouri under the alias of Tom Howard, while the gang has shrunk to the James brothers and the Ford brothers. Zee, Jesse’s wife, does not like Bob Ford or his brother Charley because she is tired of the dangers of the outlaw life that they symbolize.

Bob agrees to stop riding with Jesse in order to marry his girlfriend, but learns that the state prosecutor will only offer twenty years in prison if he gives up. Around the same time, Missouri Governor Thomas Crittenden announces an amnesty and huge reward for the person who turns in the James brothers, even though Jesse laughs at the idea that anyone would betray him. After several attempts, Bob finally musters up the courage to shoot his best friend in the back. Although pardoned by the governor, everyone thinks Bob is a coward, and looks down on him. Ford becomes the target of every gunman, since the man who killed the man who shot Jesse James will be the biggest gunman in the country.

Hoping to make his fortune, Ford goes to Creede, Colorado, where silver was recently discovered, in 1882. Although he strikes it rich, he eventually has to face the fact that he will never have the happy life that he wanted.

Both female love interests push their men to give up the outlaw life, which is laudable but unlikely. The real Bob Ford had no girlfriend when he shot Jesse, and it is doubtful that the long-suffering Zee had any illusions that Jesse would ever choose a less life-threatening career.

The film’s versions of Bob Ford and Jesse bear little resemblance to the real men. Bob is a tough guy, who will brave anything to marry his girl, while Jesse seems more like a mild-mannered preacher than a fearsome outlaw, so it is jarring that everyone is afraid of him.

While the movie captures the tenseness of the outlaw life, Jesse’s family is shown living in rough conditions even though the genuine Jesse robbed banks simply to fund his luxurious lifestyle, including the ownership of a racehorse. Instead of considering retirement, Jesse continued to rob banks even after his brother Frank went legitimate. Jesse’s death scene is faithful to actual events but the director’s decision to have him live on a farm outside of St. Joseph, rather than inside the town, takes away the reason for Jesse to take off his gunbelt, since there were no neighbours to notice that he was armed.

Director Sam Fuller’s decision to portray Jesse as Bob’s best friend makes for a more interesting story, but it is a major exaggeration of Bob’s relationship with Jesse. The real Ford brothers were recent recruits to the gang, and Bob only became famous after he shot Jesse. Furthermore, the actual gang was much larger. Following the destruction of the James-Younger Gang at Northfield, Jesse had recruited Wood Hite, Ed Miller, Bill Ryan, Dick Liddil, Tucker Bassham and Charley Ford. In fact, Bob Ford was more of a hanger-on than official member of the gang.

The screen Charley had no involvement in the killing, but is afraid of Frank and the rest of Jesse’s kin, so Charley and Bob go their separate ways. This is a sharp break with reality, since the brothers committed the deed together and remained together until Charley killed himself. Most important, the Ford brothers had contacted the governor and arranged a pardon because Bob had killed Jesse’s cousin Wood Hite when he was about to shoot Dick Liddil after they had quarreled over the Fords’ sister.

Unlike the movie’s version of Frank’s fate, he surrendered and stood trial, where he was acquitted by sympathetic juries. Twice. It is true that the Daltons were related to the Youngers, but they began robbing trains in 1891, well after Jesse James was dead. Hoping to earn enough money to get married, the screen Ford agrees to star in a show where he re-enacts shooting Jesse, but he can not go through with the performance on opening night. One of the better scenes in the movie, it combines guilt with contempt for the audience. Unfortunately, it did not happen. The Ford brothers supported themselves for a period of time by performing a re-enactment of the shooting, although it is true that they had received only a fraction of the reward.

Although Ford did meet his end in Creede, it took place in 1892, ten years after he had killed Jesse. However, he did not work a claim, but ran a saloon, apparently realizing that it was easier to make money selling whiskey to the men who dug for silver, rather than dig for it himself.

The movie is an early noir Western. Fuller has admitted that he had little interest in an ordinary Western, but wanted to explore the thinking of a psychotic, delusional killer, therefore Ford is a swaggering tough guy, none too bright, who would fit in perfectly in a film noir.

Made on a limited budget in ten days, all of the filming took place on a frontier street at Republic Studios, which explains why the boom town is so settled and nice. The doomed romance and lovers’ triangle is entertaining but invented. This kind of story can only end one way and it does, even though Ford lived much longer and had a very different end.

The movie takes enough real events to follow the outline of Jesse’s death and Ford’s torment, but it is far from accurate. The mixture of good dramatic scenes with two-fisted punch-ups makes for a well-paced, enjoyable movie, especially since it was Fuller’s first time directing.