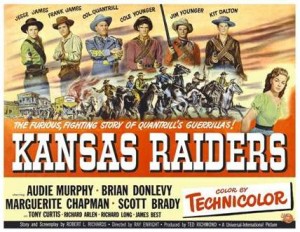 Unfortunately, the settlers would not know peace for very long. The Republican Party had campaigned against the expansion of slavery to new states, so long-simmering tensions between northern and southern states exploded when Republican candidate Abraham Lincoln was elected president in 1860. Seven southern states seceded in February 1861 and formed the Confederate States of America. Kansas Senator Jim Lane was appointed a brigadier general of volunteers in June 1861, and since he had been a leader of the free soilers during Bleeding Kansas, former Jayhawkers (abolitionist guerrillas) were naturally used as the core of the brigade. With most able-bodied men joining the Confederate army, the Jayhawkers decided to repay Missouri for raids by pro-slavery advocates during the 1850s. The homes of known pro-slavery families were torched and anything of value was taken back to Kansas. The eight-month-long orgy of looting, burning and raiding in Missouri ended only when the Union gained full control of the state in March 1862. However, Missouri was far from pacified. Led by William Clarke Quantrill, Missouri guerrillas (Bushwhackers) raided in Kansas and picked off Union patrols in Missouri. The harsh methods used by the Union soldiers to track down the guerrillas simply swelled their ranks with more recruits, including Frank and Jesse James, and Cole Younger.

Frank (Richard Long) and Jesse (Audie Murphy) James, Cole (James Best) and Jim (Dewey Martin) Younger, and Kit Dalton (Tony Curtis) ride into Lawrence, Kansas, and are saved from lynching as suspected spies for William Clarke Quantrill (Brian Donlevy) by a sympathetic Union officer. Despite the officer’s warning, they find Quantrill’s camp and join his band. Jesse is given command of his own group of guerrillas, but soon finds that guerrilla life is not what he expected. When Quantrill lets his men burn and pillage during a raid on a farmhouse, Jesse begins to question his allegiance to the guerrilla chieftain. The other men accept that they are bandits, not guerrillas, and believe that Quantrill just likes to pretend that he is a real colonel. Kit Dalton and the Younger brothers do not mind looting, claiming that it is better than farming, but Frank and Jesse have more trouble adapting to the situation. Quantrill’s wife Kate (Marguerite Chapman) had also become disillusioned and wants them to leave. Taking advantage of Jesse’s impressionable nature, Quantrill convinces him to stay and take part in the major raid on Lawrence. Jesse’s group is assigned to rob the bank, which introduces the young men to a new career. The town is left in flames but the destruction provokes a furious reaction by the Union. Weakened by the Union army’s relentless pursuit, most of the band leaves Quantrill, and only Jesse’s group stays. They ride to Kentucky, but Union cavalry are closing in on the fugitives.

The script makes no mention of Bleeding Kansas or the fact that Quantrill’s followers were all Missourians seeking revenge for the Jayhawkers’ rampage of looting early in the war. Instead, the guerrillas are described as bandits posing as guerrillas who pillaged both sides. While many of the guerrillas on both sides took advantage of the lack of military structure to help themselves to other people’s possessions, Missouri was occupied by Union troops, so Quantrill’s men were too dependent on the support of their network of friends and relatives to loot their own people.

It is hard to imagine that a movie could be this silly. Colonel Quantrill’s hideout is an orderly camp with a Confederate flag flying from a flagpole and a bugle calling the troops to assemble, while he lives in a nice, cozy house. The real guerrillas were constantly on the run, so their camps were rough and temporary, which is why the majority of the guerrillas were young men in their early twenties, able to bear the punishing life.

Although Bloody Bill Anderson, Quantrill’s second-in-command, is justly portrayed as a psychopath, he had his own guerrilla band by the summer of 1863. One of the more violent guerillas, he started massacring any captured Union soldiers, often mutilating and scalping their bodies, after one of his sisters died when the building she was being held in collapsed. Furthermore, Anderson was killed in an ambush organized by Union militia over a year after the raid on Lawrence, not during the raid.

The image of five of the most famous bank robbers in American history joining Quantrill’s band at the same time must have been irresistible to the screenwriter, but it could not have happened. Admittedly, the Dalton brothers were related to the Youngers, but they were born either during the Civil War or afterwards, and Quantrill’s guerrillas did not include toddlers. Moreover, the real Frank James and Cole Younger were already part of Quantrill’s band at least a year before Jesse joined. The screen James brothers had joined up because the Redlegs, a faction of Jayhawkers, had hung their father and shot their mother’s arm off. Over-zealous Union soldiers had hung the genuine James brothers’ step-father in an attempt to force him to reveal Frank’s location, and they had beaten thirteen-year-old Jesse when he had interfered. However, their mother lost her arm after the war when Pinkerton agents threw a smoke-bomb into the house and it exploded.

The real raid on Lawrence was far more tragic than the movie’s version. Seventeen female relatives of suspected guerrillas, including two of Anderson’s sisters, had been arrested as spies and were being held in Kansas City. The building collapsed on April 14, 1863, killing five and seriously wounding the rest. Having lost control of the guerrillas, Quantrill used the death of the girls to unite the bands in a massive raid on Lawrence. Eluding Union patrols on the Missouri-Kansas border, a huge force of 450 guerrillas reached Lawrence on August 21, determined to sack the town and kill any male old enough to hold a gun. The raiders spread through the town with death lists, executing men in front of their wives and children. A total of 185 men and boys were killed during the massacre. The screen portrayal of the raid is a considerably tamer affair, where the town is looted and innocent people are killed, but there is no organized killing of every adult male. A key factor in the massacre was the fact the townspeople were unable to defend themselves since no guns were permitted within town limits, but action was required, so the screen residents of Lawrence bravely defend their town but are overwhelmed.

In the movie, the Union troops are shown as disciplined troops, and all transgressions are blamed on the Redlegs. Actually, the Union garrison troops in Missouri were second-rate units, and the soldiers routinely harassed suspected Confederate sympathizers, even though the heavy-handed approach simply increased the stream of young men disappearing into the bush to find Quantrill and take revenge on the Union troops.

The tone of the movie is bizarre. The Union captain who saves the five young men from a lynching acts as though he is warning local neighbourhood boys to stay away from a gang of delinquents, and there is a silly ceremony to initiate them into the band. Jesse is shown as a hero throughout the movie, but he can not resist the spell of Quantrill.

Despite his best efforts, Tony Curtis’ New York accent just does not fit in with the Southerners. Audie Murphy has presence but no range. The most decorated American soldier during WWII, Murphy’s 1949 autobiography To Hell and Back had become a best-seller, but he was still an inexperienced actor, having only acted in a handful of low-budget films.

Admittedly, the forty-nine-year-old Brian Donlevy was twice the age of the real Quantrill, but he was meant to play villains. In fact, he is the only member of the cast who gives a convincing performance, portraying a man who is delusional, bordering on insane.

Having started at the end of the silent era, director Ray Enright was coming to the end of long and undistinguished career. This movie did little to improve his reputation.

Silly, inaccurate and boring, weighed down by plodding direction and lame dialogue, it is just bad, one of those movies that you simply want to end.