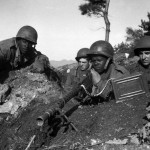 The Korean War lasted from 1950 to 1953. Although the war commenced when the People’s Republic of Korea (North Korea) invaded the Republic of Korea (South Korea), the conflict drew in other countries. The recently formed United Nations supported the south while the Soviet Union and China backed the north, although the majority of the fighting was performed by the Chinese and the Americans.