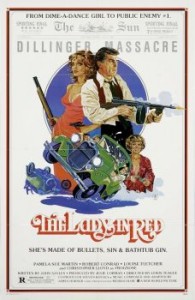 During the early 1930s, outlaws rampaged across much of the United States, robbing banks and kidnapping at will. The more famous Public Enemies included Baby Face Nelson, Pretty Boy Floyd, Bonnie and Clyde, and Alvin Karpis and the Barkers, but John Dillinger was undoubtedly the star. A wave of celebrity kidnappings and the murder of four law enforcement officers in Kansas City in June 1933 during a botched attempt to rescue a veteran bank robber made it clear that a national police force was required. Local police were forbidden to cross state lines, so the FBI was an obvious candidate for this national police force. Dillinger and his partners were arrested in January 1934 while vacationing in Tuscon, Arizona, but he made a daring escape from the Crown Point jail in March. Needing a gang, he joined forces with the inexperienced Baby Face Nelson, but the partnership was rocky and Dillinger soon dissolved the relationship. Plastic surgery enabled him to enjoy the social life in Chicago with Polly Hamilton, his new girlfriend. However, Hamilton’s roommate, Anna Sage, a former madam, agreed to betray Dillinger in exchange for a cancellation of her deportation to her native Romania. FBI agents were waiting when Dillinger, Hamilton and Sage emerged from the Biograph Theatre on July 22, and he died resisting arrest. 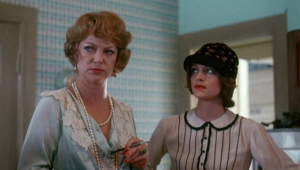 Polly (Pamela Sue Martin) is a farm girl who dreams of becoming a professional dancer. Taken hostage during a bank robbery, she is interviewed by reporter Jake Lingle (Robert Hogan), and then succumbs to his charms. Beaten by her fervently religious father, she moves to Chicago, and becomes a seamstress in a sweat shop. After her friend Rose Shimkus (Laurie Heineman) is taken away by the police for organizing a union, Polly starts working at a club where men pay 10 cents for a dance. Hoping to earn more money, she takes men in the back for handjobs, but she is arrested by a vice cop and ends up in prison, where she runs into Rose. After beating up the warden, Polly is given a longer sentence, until she agrees to accept a furlough, and work as a prostitute in a brothel run by Anna Sage (Louise Fletcher), handing over a cut of her earnings to the warden, in order to ensure better treatment for Rose. When the brothel is closed down after a gangster blinds one of the prostitutes, Sage opens a restaurant and hires Polly as a waitress. Polly starts dating Jimmy (Robert Conrad), who is actually John Dillinger after plastic surgery. Facing a deportation hearing, Sage makes a deal with the FBI, and tells them that Dillinger will be at the Biograph Theater. Tired of being pushed around, Polly decides to rob the mob’s bank, but the robbery ends in bloodshed. 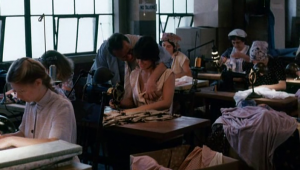 Screenwriter John Sayles incorporated many historical figures into the script, but he is flexible with the dates. While the script mixes up some of the historical figures, it captures the bleak reality of life during the Depression before the introduction of labor regulations. In particular, the film presents the limited range of career opportunities for women.

The scenes in the garment factory make it easy to understand why they were called sweat shops. Aside from Patek (Dick Miller), the supervisor, all of the seamstresses are women. Promising better pay for sexual favors, Patek hits on all of the younger women. Those sexual favors have a cost in the time before birth control. There is a grim scene where one of the seamstresses has to be hospitalized after a botched abortion, caused by Patek’s refusal to acknowledge paternity. 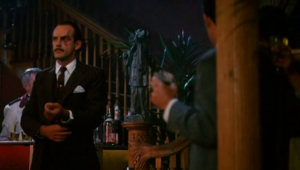 Although Sayles deserves praise for his portrayal of gangsters as vicious thugs, several of the famous gangsters in the movie did not actually operate in that period or location. One of the script’s more glaring errors concerns the relationship between the gangs in New York and Chicago. Anna Sage pays protection to Frognose (Christopher Lloyd), who works for Lucky Luciano. Admittedly, New York-based Luciano was involved in prostitution after the repeal of Prohibition eliminated his main revenue stream, but Chicago was run by the Outfit, the successors to Al Capone, and they did not tolerate outsiders, not even the titular head of the Commission.

In the film, the brothel is closed down after Frognose, a sadist, murders a prostitute. In reality, Sage had twice been convicted of operating a house of prostitution, but connections to politicians had ensured that she was pardoned. However, she was convicted a third time, and the new governor was a reformer who refused to pardon her. 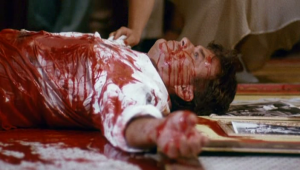 Sage and Polly don’t know that Jimmy is Dillinger until Lingle comments that Polly’s boyfriend is the spitting image of the most famous outlaw in the nation, and Sage’s lover Captain Hennessey recognizes him. The script does not mention that Dillinger had received plastic surgery, but the plastic surgery was rudimentary, someone who was familiar with him probably would have recognized him. Hennessey is based on the real Sage’s boyfriend Sergeant Martin Zarkovich, who was a fixer for the local political establishment, so he and Dillinger shared contacts in the underworld. In fact, the real Dillinger moved in with Sage and Hamilton.

The shootout at the Biograph is considerably more melodramatic than the reality. Noticing the trap, Dillinger uses a bystander as a shield as he tries to escape but FBI agents shoot the bystander to get Dillinger. After he has been killed, people dip their hankerchiefs in his blood, while FBI agent Melvin Purvis plants a gun next to Dillinger. Morbid as it may sound, bystanders did put their hankerchiefs into Dillinger’s blood after his corpse had been removed. There was a rumor that Dillinger was unarmed and the agents did not give him time to surrender, but it is hard to take the rumor seriously. Given the disturbing number of law enforcement officials whose lives came to a sudden end when they tried to arrest one of the Public Enemies, it seems more than likely that Dillinger was armed. 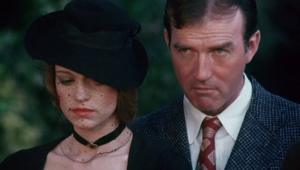 When Polly gets attention in the news, Frognose worries that she will talk, so a terrified Lingle provides her address, but she kills Frognose’s hitmen. A former client of Polly’s kills Lingle to repay her for the time she witnessed him commit a murder and did not tell the police. The movie’s Lingle is based on Alfred “Jake” Lingle, who was the top crime reporter in Chicago because he had access to both crime bosses like Al Capone and police officials like Police Commissioner William Russell. When he was assassinated on June 9, 1930, four years before Dillinger’s death, several Chicago newspapers put up $55,000 as a reward for information leading to the murderer’s conviction. During the investigation, it turned out that Lingle had maintained a lavish lifestyle on a modest salary, despite having lost everything on Black Thursday, because he was a fixer between Capone and City Hall. It later emerged that Lingle was killed because he had demanded too large a cut from a gambling house under the protection of Bugs Moran, Capone’s main rival. 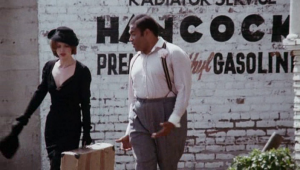 The script does not sidestep the racism that was common at the time. The dance hall refuses to admit Greeks, Chinese or Filipinos. The warden calls black and Jewish prisoners nigger and kike. Blacks were not allowed in some hotels, and could be arrested or even killed for being alone in public with a white woman.

Finally, the scene where Pops (Peter Hobbs), a retired bank-robber, trains Polly and her friends to rob a bank is the best presentation of the Public Enemies’ methods I have ever seen. He makes them practice the robbery in a mock version of the bank, where each person has a specific job and the robbers have to leave after three minutes, regardless of whether or not they got all of the money. 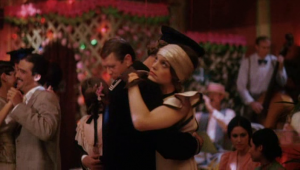 Powered by a brilliant script, the movie moves at a breakneck pace, blasting information about the Depression until the romance between Dillinger and Polly slows things down.

I think that Sayles sold the script on the connection to Dillinger, but it is really an examination of women in the Depression.

The drift into prostitution is gradual but Polly resists each stage, refusing Patek’s offer of extra pay in exchange of favors. When Polly starts working in the dancehall, she initially rejects customers’ offers to pay for handjobs, but finally gives in and follows the lead of the more experienced dancers, who point out that none of the men go there to dance. The warden’s offer of a furlough is turned down until her sentence is extended.

There is a running theme that whenever Polly gets a new job, she is hopeful, but almost all of the money goes to someone else. Even though she makes more money with each job, she can never get ahead. 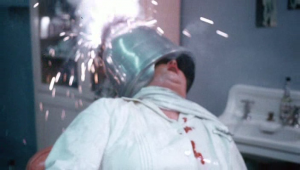 As a Roger Corman film, it is a bit sensationalist. The warden is a sadist, so she tells Rose that Polly is a prostitute, not a dancer. Attacked by an enraged Rose, the warden panics and kills her, then is murdered in a savage yet impractical manner by the other prisoners.

It is a grim movie. Sage says that she was tossed naked into a brothel after she got off the boat, so she kept money in her mouth, since she had no clothes.

I only remember Pamela Sue Martin from Dynasty, but she did this a year after starring as Nancy Drew on TV. I am a guy, so I never watched Nancy Drew, but I did watch Dynasty, and Martin’s character Fallon Colby had possibly a tenth of the energy she displayed in this movie. Honestly, I have to wonder why she never did anything this good again?

Wow, just wow. Why is this not better-known?