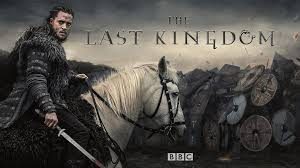 The focus in season two moves north to show what has been happening while Uhtred (Alexander Dreymon) has been keeping Wessex safe for Saxons. Having driven the Danes out of southern England, Alfred (David Dawson) wants order, Christianity and an end to Viking rule in Northumbria. Drawn into Alfred’s schemes, Uhtred makes Guthred (Thure Lindhardt), a Dane, king of all of Northumbria, both Dane and Saxon, although his brother Ragnar (Tobia Santelmann) is the real power behind the throne. Many mean, nasty people are killed along the way. Given how little is known about Northumbria, it is impossible to know whether or not the season is accurate, but the portrayal of Danes surrounded by a sea of Saxons and gradually mixing with the locals is plausible. The genuine Ivar the Boneless had made Northumbria his base when he first led the Great Heathen Army to invade England, but he had died fighting in Ireland and his brothers Ubbe and Halfdan lost their lives in battles against Wessex, so there quite likely was no single king who ruled all of Northumbria. 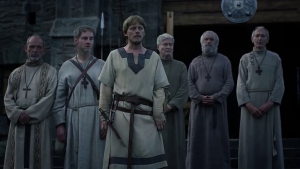 Uhtred does make life hard for himself.

Guthred’s rapid rise was due equally to Uhtred’s skill shoving swords into people’s bodies and the guidance of Abbot Eadred (David Schofield), who claimed to have seen Guthred in a vision, which enabled him to rally Christian Saxons behind the pagan Guthred, who soon switches faiths. Preferring to remain the sole voice in Guthred’s ear, the abbot arranges for Uhtred to be sold into slavery to cement an alliance with Uhtred’s uncle Aelfric, the lord of Bebbanburg. After a horrific experience as a slave pulling an oar on a ship, Uhtred is freed by Ragnar. Failing yet again to control his temper, Uhtred kills Abbot Eadred when he insists that Guthred’s sister Gisela (Peri Baumeister) is already married to Aelfric, which drives the lapsed nun Hild (Eva Birthistle) to return to the church. Alfred takes advantage of the abbot’s death to force Uhtred to serve him or Ragnar will be executed since he was in charge. 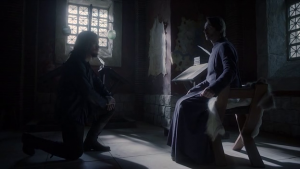 The Last Kingom is based on the Saxon Tales series of books by Bernard Cornwell, who is extremely critical of the Christian church, so in the books Uhtred viewed it as an institution that existed for the sole purpose of sucking all of the joy out of life and squeezing every ounce of gold out of people. Good, honest priests existed but were rare. Most of that criticism has been erased from the show. Admittedly, there are scheming priests like Abbott Eadred but overall the church is benign, and does not play a leading role in the kingdom.

Instead, Alfred’s powerful religious zeal is the main manifestation of the church. At one point, Alfred blows up and states that he knows Uhtred serves him reluctantly, meets freely with the enemy, and still refuses to believe in the Christian god. Speaking bluntly, Alfred admits that he does not trust Uhtred because he does not know him and does not understand him. 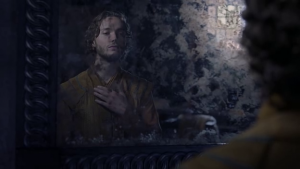 Not every Saxon wanted a united England.

The first season ended with Alfred’s decisive victory over Guthrum, who even accepted baptism. However, a single victory could not end the Viking threat, so England was divided into Saxon territory in the west, and the Danelaw in the east, as the Danish settled and put down roots. The Danelaw consisted of eastern Mercia and East Anglia, while the Saxons kept Wessex and western Mercia. Hoping to expand his influence, Alfred seeks to arrange a marriage between his daughter Aethelflaed and Aethelred, the leading Mercian ealdorman, since King Ceolwulf II of Mercia was dying and had no heir. While the real Ceolwulf seems to have agreed to rule western Mercia for the Vikings, the screen version is great, old and resentful that Alfred will only send warriors if he agrees to a marriage that will link Mercia more closely with its more powerful neighbor.

Little is known of the real Aethelred, but even though the fictional Aethelred (Toby Regbo) is intended to be unlikeable, his schemes reflect the desire of Mercia to remain independent. Although Alfred’s struggle to defeat the Danish invaders and unite the Saxon kingdoms is now viewed as the beginning of England, he was quite likely regarded with suspicion by his Mercian allies, who understandably did not share his desire for a mighty England with a single king, namely him. 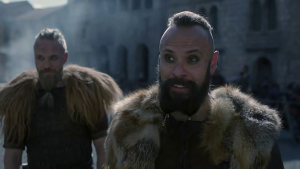 When the second half of the season starts, several years have passed, Uhtred and Gisela have children and he commands a burgh near London, the edge of Wessex territory. Even though Uhtred diligently kills Danish raiders who try to sail up the river to plunder Mercia, he is still not trusted by Alfred. Realizing that they have a good life, Gisela refuses to support Uhtred when he gets restless. Athelstan, formerly known as Guthrum, is old and wants peace but can not restrain more adventurous Danes, especially when the brothers Siegfried (Bjorn Bengtsson) and Erik (Christian Hillborg) arrive in East Anglia. As they settled down, the original Danish invaders would have been absorbed by the much larger Saxon population, but they are followed by new waves of Vikings, hungry for glory and riches, emphasize riches.

Siegfried was a 2D villain in the books, but Bengsston transformed the screen version into a fascinating character who has a weird Freddie Mercury-like charm with a threat of violence always lurking beneath the surface. The actor just became part of the cast of Taron Egerton’s new Robin Hood film, so hopefully he will join Mads Mikkelson and Stellan Skarsgaard as go-to villains. Gustaf Skarsgard, Stellan Skarsgard’s son who plays Floki on Vikings, hasn’t been picked up by Hollywood because the seasons on Vikings are so long that he has no spare time. 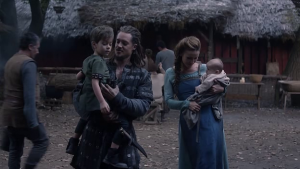 Burghs are often referred to on the series but never explained. The failure to actually show a burgh, basically a fortified town, is especially frustrating since they are one of the few things we know about Alfred’s reign.

Realizing that the Vikings moved too fast for the local ealdorman to assemble his own household troops and raise the fyrd, Alfred ordered the construction of a network of fortified settlements or burghs across Wessex. Instead of floundering around chasing Viking raiding parties, people would be sheltered within the burghs, which could only be taken in a bloody assault or a lengthy siege. Lacking the money to pay troops to garrison the burghs, many were placed at the junctions of trade routes or market towns, thus attracting residents who could defend the town and tax revenue to pay for soldiers. Aside from revolutionizing defence, Alfred made the greatest move towards urban life since the Romans had built towns, and the concentration of people in these burghs led to the creation of a middle class. This strategy would follow the expansion of Alfred and his heirs into Mercia and Northumbria. While this system proved astonishingly effective, it was undoubtedly insanely expensive, since new communities needed to be built from scratch or abandoned Roman towns that had fallen into ruin needed to be rebuilt. 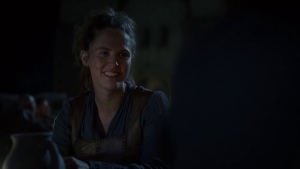 Overall, everyone seems like a human being this season.

Father Beocca (Ian Hart) spends much of his time struggling to restrain Uhtred’s and Ragnar’s murderous impulses, reluctantly remaining silent, hoping they can master their own rage towards Guthred. Or reminding Uhtred’s Danish allies that there is only one god, to their obvious confusion. The friendship between Beocca and Uhtred appears more genuine. Watching Uhtred give romantic advice to Beocca is a joy. Even Brida (Emily Cox) is charming despite her rough edges.

However, the standout character is Guthred, a decent, likeable man who has a weighty responsibility and is clearly uncomfortable dealing with hardened killers like Uhtred, Ragnar and the brothers, but does his best, and has no illusions that he has a better claim to the throne than anyone else. In particular, his explanation why he betrayed his friend is refreshingly honest. 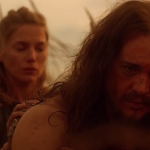 In the books, Hild was Uhtred’s lover and his friend, here she is merely a friend, who respects him despite his many flaws. When he goes on a drunken binge for weeks, she looks after him. When he is rescued from slavery, she bathes him. Always reminding him of who he is, even when he forgets. 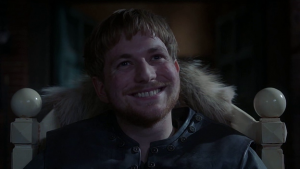 I have to admit that I am starting to like Aethelwold.

Aethelwold (Harry McEntire), Alfred’s nephew, shifts between court jester and surprisingly perceptive observer, while always scheming for the throne, with little success. Athelwold is still a drunk but he is fleshed out and given a number of decent character traits, as well as a growing understanding of how to rule. Assigned to accompany Uhtred to help Guthred keep his throne, Aethelwold stays sober long enough to appreciate Alfred’s plots but still wants the throne for himself. 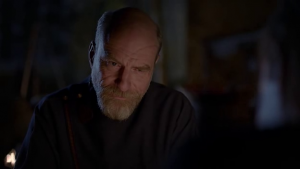 A sickly king with a young heir will drive an adviser to drink.

Odda (Simon Kunz), Alfred’s chief adviser, drinks heavily to deal with the fear of serving a sickly king with a young heir, a rival claimant openly scheming for the throne, and a warlord who is distrusted by the king. Aware that their hard-won peace could easily disappear, his nightmare comes true when Aethelflaed is captured, and he has the courage to advise Alfred to ask his daughter to kill herself rather than bankrupt the kingdom to pay a ransom that will give Erik and Siegfried the money to raise an army to finally conquer Wessex. In the end, he commits treason to save Wessex, and pays the price. 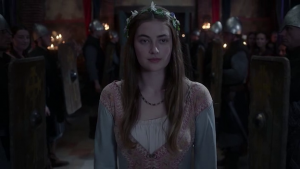 While they may be free from the Danes, people are not free.

As one of Uhtred’s sworn men, Sitric must obtain his lord’s permission to marry. When Uhtred dismisses Sitric’s intended because she is a whore Gisela points out that there is little difference between an alehouse whore and a peace cow like Aethelflad, since she is merely a whore in a wedding gown who will marry and be humped by a man she does not know and for a price. His response that that is the way does not go over well since she herself was a peace cow who was to be married to his uncle.

To sum up, the series is a pleasure to watch and satisfies the cranky critic within me, I just hope that Netflix decides to renew it for a third season.