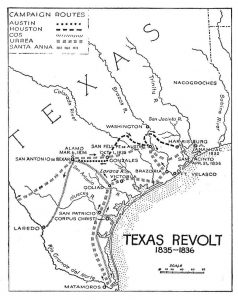 Here is Part I of my podcast on the Texan Revolution, it is 32 minutes long.

Here is Part II of my podcast on the Texan Revolution, it is 31 minutes long.

Here is a list of all of the movies on the Texan Revolution:

Heroes of the Alamo presents the growing tension between the American immigrants in Mexico and the Mexican government that eventually led to the Texan Revolution. Even for a movie made in 1937, this is horrible, almost incompetent. (full review)

Although the film covers the entire Texan Revolution, it is presented as a chapter in the life of Sam Houston, so viewers will actually learn little about the revolution, especially since the script is a giant mess of inaccuracies. (full review)

Initially three episodes that were shown as the Disney television miniseries Davy Crockett, the movie presents Crockett as a frontiersman, congressman and one of the defenders of the Alamo. Better than most movies on the Alamo, and it shows the full scope of Crockett’s eventful life. (full review)

The Last Command examines the origins of the Texan Revolution and presents the siege of the Alamo, placing Jim Bowie firmly in the hero’s role. Unbelievably lame, it is more historically accurate than John Wayne’s version but it is also much less fun. (full review)

The general chronology of the Texan Revolution is correct, at least the dates are correct, but everything else is inaccurate. The movie is so lacking in energy, I wonder why they bothered. (full review)

The Alamo (1960), John Wayne’s directorial debut, is entertaining, but stretches the facts horribly, transforming the Texan Revolution from a rebellion by American immigrants who wanted to continue their practice of slavery into a defence of liberty against tyranny. (full review)

Presenting the history of Texas from Stephen Austin’s colony in 1823 to the annexation by the US in 1846, the miniseries shows the reaction of the native Tejanos to the American colonists, but the acting makes it hard viewing. (full review)

Although it is a faithful presentation of Sam Houston’s life, the acting is mediocre. Still, it is a moderately entertaining history lesson, which is more than can be said about most of the movies on the Texan Revolution. (full review)

Focusing on the thirteen-day-long siege of the Alamo during the Texan Revolution, it is better than several versions in the 1940 and 50s. Please do not misunderstand, I am not saying that it is good but there are worse. (full review)

Texas Rising, a miniseries about the Texan Revolution, is simply horrible. The writers’ claim to fame is that they produced Hatfields & McCoys, which was really good. This is not good. It is nowhere near good. It manages to be even worse than the recent Bonnie & Clyde miniseries. Admittedly, it gets the dates and places right. After watching this, a high school student would probably pass a history test but this is not meant for grown-ups. (full review)