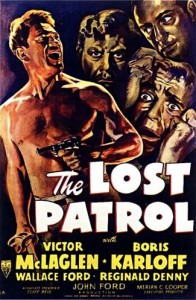 Following Britain’s declaration of war against Turkey on November 6, 1914, the British Indian Expeditionary Force (IEF) captured Basra in Mesopotamia on November 22 to protect Persia and the vital oil refinery at Abadan. General Sir John Nixon, who took command of the IEF on April 9, 1915, had been ordered to solidify control of Lower Mesopotamia and ensure the safety of the oil fields and pipelines. Impressed by the ease of the British victories, an ambitious Nixon changed the objectives of the IEF from safeguarding Persian oil supplies to capturing Baghdad, and Major-General Charles Townshend was instructed to lead an army further up the Tigris River. A battle between the British and the Turks at Ctesiphon, twenty-five miles from Baghdad, was a draw, so Townshend led his army back to Basra. Aware that the Turks had been reinforced, Townshend knew that his exhausted army would never outpace the enemy to reach Basra, so he decided decided to dig in at Kut, which was surrounded on three sides by loops of the Tigris River, and wait for a relief army. However, the commander of the Turks realized that part of his army could keep the British bottled up, while the rest blocked the route to Kut. Worried that Townshend could not hold out long enough, the relief force was hastily thrown together without enough equipment, supplies or transport, while the troops were inexperienced and unfamiliar with the Middle East. The Turkish army besieging Kut had been reinforced by veterans from Gallipoli, and the harsh terrain was hard enough to cross without having to face experienced troops in trenches with machine guns. A British army made several bloody attempts to break through the Turkish lines to relieve the garrison at Kut but failed, so Townshend surrendered on April 29, 1916.

The Mesopotamian campaign had been considered a sideshow until the national shame of a British army surrendering at Kut drove the British government to take the campaign more seriously. The troops spent the summer and fall of 1916 sitting around battling disease, while the engineers struggled to build a proper logistical system. Lieutenant-General Sir Stanley Maude, the new commander of the British Indian Expeditionary Force (IEF), waited until he had an army of 150,000 men. The campaign consisted of gradual attacks against an endless series of trenches in featureless terrain that produced a mind-numbing monotony but the strategy proved effective and Baghdad fell on March 11, 1917.

However, the Arabs had no allegiance to either side, and since both British and Turks rampaged through their lands, destroying their crops and irrigation canals, it should not be a surprise that they looted both sides equally. They preferred to waylay small parties, and their ability to infiltrate any camp drove British commanders mad, so patrols were sent out into the desert to guard the flanks of any advance.

A lieutenant leading a British cavalry patrol in the Mesopotamian Desert is shot by a sniper. The inexperienced lieutenant had refused to tell his sergeant the orders, so the sergeant does not know where they were supposed to go or even where they are. Hoping to link up with the brigade, the sergeant leads the patrol towards the river, but they find an oasis with an abandoned building. Unfortunately, when they wake up the sentry is dead and the horses are gone. Without horses, their only option is to stay at the oasis and hope that another patrol will find them. One by one, they are killed by an unseen enemy until the heat and the pressure drive the men mad.

Since it is more of a drama than a war movie, the story focuses on how the stressful situation affects the relationship between the characters, rather than the actual campaign in Mesopotamia. Aside from a few regular soldiers, most of the men enlisted after the war started, which is an accurate portrayal of the British army at that time. A recent recruit has read too much Rudyard Kipling and still thinks that war is glorious. A generation had grown up reading Kipling’s stories that preached the benefits of British imperialism. Kipling thought war was glorious until his son died at Loos in 1915.

The movie captures the Arabs’ ability to avoid detection and enter well-guarded camps, never mind an isolated oasis in the middle of the desert, at will.

There is good banter among the soldiers, and they are given brief but effective character sketches. Several soldiers stand out: the young recruit with Kipling-inspired dreams of glory, who wants to serve in the ranks before becoming an officer; the jovial father with a newborn son; the former vaudeville dancer who never made it big; and the two regular soldiers always arguing over who was the bigger trouble-maker during peacetime. McLaglen is particularly believable as the sergeant since he had actually served during the Mesopotamian Campaign. Sanders (Karloff) is a fervently devout Christian, who is physically unable to accept anyone who does not share his beliefs and preaches constantly. Although it is an excellent performance, Sanders’ insanity hovers between disturbing and really annoying.

The contrast between the claustrophobic interior of the building and the vast exterior of the dunes is unsettling. While there is quite a bit of humour in the early scenes, the story gets progressively dark as the number of graves grows.

Although it was filmed in the United States, the scenery is brilliant. The sand dunes stretch forever, so it is impossible to get bearings. Filming in the desert made the movie more realistic, but windstorms played havoc with the relatively short schedule of twenty-one days, so both the actors and crew began to lose their tempers due to the oppressive heat and delays, which may have given their performances an added edge.

Director John Ford produced a taut, gripping drama that provides a snapshot of desert fighting during the Mesopotamian campaign.