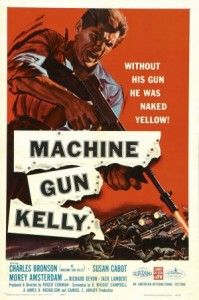 A former bootlegger, George “Machine Gun” Kelly had switched to robbing banks in 1930, but he proved to lack the stomach needed for such a high pressure career, so Kelly and Albert Bates kidnapped Oklahoma City oilman Charles Urschel on July 22, 1933, less than a month after the massacre. Urschel was freed nine days later in exchange for a record $200,000 ransom, but Kelly would have little time to enjoy his newfound wealth since he was captured by FBI agents in Memphis on September 26, giving the newly empowered Bureau its first victory.

George ‘Machine Gun’ Kelly (Charles Bronson) leads a gang of bank robbers, and his girlfriend Flo (Susan Cabot) cases the banks. Although they are successful, relations within the gang are far from amicable. Terrified of death, Kelly screws up a robbery because he passes a coffin being unloaded while walking towards the bank, which results in the death of their driver. Kelly’s surviving partner joined a new gang, which warns Flo that their old partner wants to kill Kelly, so he has to stop robbing banks. Rather than comply with the rival gang’s demand, Flo goads Kelly into killing all five members of the gang. Despite eliminating his competition, Kelly decides to switch to kidnapping, and his first target is a little girl, the daughter of a steel executive, snatched while she is walking home from school. When an observant cop becomes suspicious, they run to a gas station operated by an old hanger-on of the gang. However, Fandango (Morey Amsterdam), a former partner, has made a deal with the police, so Kelly and Flo find themselves surrounded.

Aside from the title character, all of the other characters are fictional. As is almost the entire movie.
While some movies glorify criminals, Machine Gun Kelly goes in the opposite direction. It is the most law and order movie I have ever seen.

After robbing a bank in less than thirty seconds, Kelly changes clothes while the driver speeds away from the bank, then throws the money to his accomplice Fandango, who is waiting with another car on another road, while Kelly’s car is moving, all to ensure that they make it through the police checkpoint, which has been set up within minutes of the robbery. Honestly, the scene is impressive, but utterly fanciful. While the police and local vigilantes did man checkpoints, there were usually too many roads out of each town, and the bank robbers had carefully mapped out escape routes.

The relationship between the screen Kelly and his girlfriend Flo is filled with friction. Flo is based on Kelly’s wife Kathryn, who did create his image as Machine Gun Kelly, telling anyone who would listen that her husband was the notorious Machine Gun Kelly, unaware that criminals do not need press agents. In fact, her constant boasting about Kelly’s skill as a bank robber caught the FBI’s attention when they were tracing every possible lead after the Kansas City Massacre. However, they seemed to genuinely love each other. Despite the endless snarling in the movie, the real Kelly appears to have been an affable man who got along well with all of his partners, since none of the surviving bank robbers or associates ever had a bad word to say about him.

I should not have to explain this, but gangs of bank robbers did not have shootouts over territory, there were more than enough banks to go around. Actually, most of the main Public Enemies knew each other, and often provided shelter or connections when the heat was on.

Kelly did switch to kidnapping after he realized that he was not cut out for the high-stress career of robbing banks, but his victim was an oil company executive, not a little girl. In the film, Kelly was about to settle for half the ransom and kill both the girl and her nurse when he is surrounded by agents. While the real Kelly was arrested by the FBI, his capture took place months after the ransom had been paid and the victim had been released.

Pretty much the sole positive comment I can make about this movie is that the music during the opening credits is excellent.

It was Charles Bronson’s first lead role. Roger Corman made many movies, and some of them are good, or at least enjoyable. This is merely a competent yet unpleasant movie. Corman’s love of sensational violence runs through the movie. Early in the film, Fandango takes $5,000 from the loot thrown to him by Kelly during the getaway, unaware that the newspapers had reported the correct amount. Unwilling to let it slide, Kelly arranges for Fandango to be mauled by a mountain lion, which causes him to lose an arm. Most directors would simply show a savage beating, maybe play with the camera angle, but not Corman. He has to use a mountain lion.

Kelly and Flo have a love/hate relationship, mostly hate. Flo is compelled to flirt with every man, while Kelly is obsessed with his machine gun. As tempers fray while they are waiting for the ransom, Flo boasts that she made him from a bootlegger into Machine Gun Kelly, giving him the gun and the nickname. When a furious Kelly hits Flo, his new partner Apple (Roger Devon) hits him and becomes her new man until Kelly gets his gun, so she goes back to him. This game of romantic chairs takes less than a minute. Honestly, yuck, just yuck.

None of the characters actually like or trust each other. In fact, every single one of the criminals is repulsive. Populated by nasty characters, it is simply an unpleasant movie.