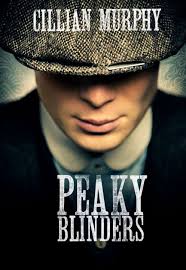 The third season of Peaky Blinders premieres on Netflix on May 31. I am a huge fan of the show, but I will not review it, or at least not anytime soon, so here are nine reasons to watch Peaky Blinders.

Peaky Blinders is set Birmingham, England in 1919, a year after the end of WWI (1914-1918). When a shipping container filled with twenty-five Lewis machine guns en route to Libya disappears in Birmingham, Chief Inspector Chester Campbell (Sam Neill) is brought over from Belfast by Winston Churchill, Secretary of State for War, to figure out whether they were stolen by the IRA, the communists or the local gang, the Peaky Blinders, run by the Shelby family. The chief inspector was chosen because his harsh methods had proven effective in restoring order after the Easter Rebellion in 1916. Aware that the local coppers were either on the Peaky Blinders’ payroll or afraid of them, the chief inspector recruits men from Belfast to employ vigorous and bloody policing methods to clean up Birmingham.

1) God and Aunt Polly are listening. 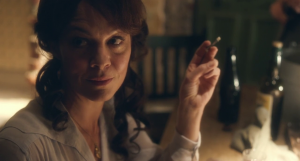 Aunt Polly may not serve as the traditional definition of a female role model but she is the moral center of the show. Helen McCrory fills Polly with character formed by experience, most of it bad. While it is never said, it is clear that she basically raised the Shelby boys, and ran the business while they were serving in France. Although the family is incredibly tight-knit, there is a constant struggle between Tommy Shelby (Cillian Murphy) and Polly, where Polly is the voice of reason against Tommy’s preference for dangerous risks. Polly is by no means a delicate woman, but even she is daunted by the task of coping with men who have been changed so much by the horrors they saw during WWI that she does not really know them anymore.

Helen McCrory was the villain on the second season of Penny Dreadful, where she was suitably frightening, but the mix of family loyalty and desire for a better life make her fascinating in Peaky Blinders.

2) The men came back from the war, but they are not the same men. 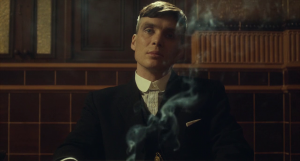 Peaky Blinders is one of the few TV shows to examine the effect of war on veterans. Hell on Wheels barely refers to the American Civil War, even though all of the workers were veterans. Boardwalk Empire showed that veterans Jimmy Darmody (Michael Pitt) and Richard Harrow (Jack Huston) had trouble adjusting to life after WWI, but they are presented as outliers on the show, since none of the other characters are veterans. Here, everyone had served and everyone is scarred, some just hide it better. Not even opium can banish Tommy’s nightmares, while his elder brother Arthur (Paul Anderson) drinks and brawls, growing increasingly uncontrollable.

3) The war is such a big issue that it receives two reasons. 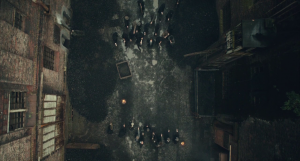 Even the coppers have contempt for their superior who did not fight in the war. Furthermore, since the men joined as Pals battalions, where men from the same factory or neighborhood enlisted together, the men all served together and they keep the same bonds after. Because people enlisted with their neighbors, the Shelbys fought in a battalion but their rivals from outside the city were in another battalion. During the war, they fought well together but returned to rivalry when they came home.

At one point, Tommy is about to be assassinated, one of several attempts that he survives actually, and his assassins had also served in France, so they treat him with respect. 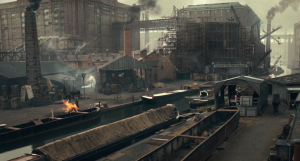 Although Boardwalk Empire’s focus was gangsters during Prohibition, it did not really show the poverty that drove the early gangsters, and Nucky Thompson (Steve Buscemi) always seemed middle-class, despite the lame flashbacks in the fifth season. In Peaky Blinders, the Shelbys are poor and the nation as a whole is struggling, so they want legitimacy. Tommy can recruit a lot of men because many veterans are out of work, and don’t mind bashing heads in order to put food on the table.

Viewers are likely to root for Tommy because he is charismatic and constantly claims that he wants to go legit but still does nasty things because he wants to be rich and legit. Emphasis on rich.

5) Sam Neill probably gave the best performance of his career as the astonishingly malevolent chief inspector, who switches from a polite, mannered gentleman to a raging beast in an instant. 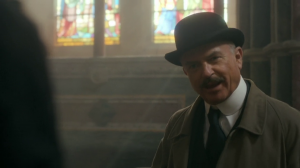 Warning Thomas Shelby to cooperate with a scheme, the major states that if he is crossed “I will do things that would shame the devil, my fury is a thing to behold.” It is. Despite the evil that he does, he is convinced of his moral superiority, claiming that “I have the love of God, and the certainty of salvation.”

Promoted to chief of staff of British intelligence in the second season, Campbell becomes even more ruthless. Blaming the Shelby family for surviving his previous attempt to destroy them and sharing a romantic rivalry with Tommy, he employs all of his considerable might to eradicate them, after first using them for his own purpose. The feud between the Shelbys and the major is something to witness.

6) The old order is changing. 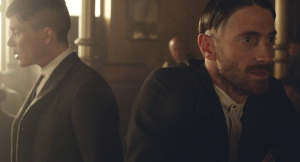 Tommy Shelby’s former best friend and fellow soldier Freddie Thorne (Iddo Goldberg) has become a communist agitator, trying to lead the workers at the local factory to strike. Since the wave of strikes is viewed as sedition, Freddie is frequently the target of police raids. The communists and the IRA are merely background scenery to the main story, so viewers will not learn much about the horrible labor conditions of the time. However, Freddie is the only man who stands up to Tommy. Freddie wants to change the world, but Tommy just wants to make a better life for his family. Tommy has contempt for Freddie’s idealism, while Freddie is disgusted that his former friend hurts people for money.

While both Freddie and Tommy’s sister Ada (Sophie Rundle) serve as the conscience of the show, their impact is limited since they do not have equal screen time as Tommy. 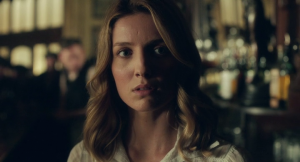 When Grace Burgess (Annabelle Wallis), a spy for Chief Campbell, first starts working at the pub, the owner tells her that if one of the Blinders wants her, there is nothing he can do to stop them from raping her. Later, the Shelby’s torch another pub simply because several customers had been disrespectful to two younger members of the gang. Reacting with lethal violence to every situation, regardless of whether it is criminal or not, the Shelbys have killed many men, but the family’s control of the local police means that the widows and mothers are forced to accept money rather than justice.

8) You will learn some history, even though not all of it is accurate.

In the first season, the British are putting down an Irish rebellion with a heavy hand. In the second season, set two years later, the British have offered a peace treaty which sparks a war between different Irish factions. Drawn into the factional conflict, Tommy finds himself doing favors for a pro-treaty faction, as well as carrying out a political assassination, so if he is caught the government will have plausible deniability.

Although the writers deserve praise for showing the effect of the war on the survivors, they did not actually do any research. Tired of Campbell’s harassment, Tommy sends a letter to Churchill, introducing himself as a veteran of the Somme and Verdun. Churchill embarrasses Campbell by mentioning that he and several of his aides had fought at Verdun. Victory at Verdun is a symbol of French pride and Marshal Phillippe Petain’s greatest achievement, but no British soldiers fought there.

Speaking of Winston Churchill, he is not given a favorable portrayal. 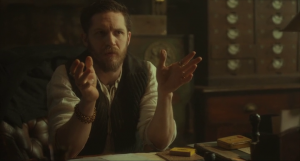 Despite the family’s victory in the first season, Tommy drags them into a vicious war between the Jewish and Italian gangs in London, even though one member of the family warns that London is just smoke and trouble. She is right.

Tom Hardy plays Alfie Solomon, the head of a Jewish gang in London, who more than holds his own in the nastiness department with Tommy. Also, I honestly don’t understand half of what he says, which seems intentional.

Here is the trailer for Season One.