When Richard I died from complications following the removal of a crossbow bolt from his shoulder on April 6, 1199, his brother John became king of a powerful empire that included England, Normandy, Brittany, Anjou and Aquitaine. Having repeatedly betrayed Richard, John was not the ideal choice, but the alternative was Richard’s twelve-year-old nephew, Arthur of Brittany. Proving to be both a poor diplomat and a poor general, John alienated his supporters, and had lost almost all of his territories in Europe to Philip, king of France, by the spring of 1204. Confined to England, John levied heavy taxes to raise an army in order to regain his family’s lands. In particular, he charged outrageous succession fees, essentially an early form of inheritance tax. Already resentful that John’s father Henry and brother Richard had gradually weakened the barons’ independence, conflict between John and his barons was inevitable, heightened by his surprisingly vindictive nature. When John’s attempt to reconquer his lost territories ended in crushing defeat at Bouvines on July 27, 1214, and he returned to England broke and humiliated, his rebellious barons saw their opportunity. Following a brief conflict, the king and the barons met at Runnymede on June 19, 1215 where John swore to uphold the Magna Carta, and the barons renewed their allegiance to John. A mixture of specific regulations related to taxes and a broader limitation on the crown’s power, the Magna Carta was supposed to be a peace treaty but failed because John did not want a peace treaty. Roughly two months later, the barons knew that war was unavoidable but they needed someone with a claim to the throne in order to have an excuse to rebel. No English claimants survived, so they looked across the Channel to Louis, son of King Philip of France. 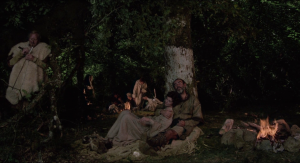 When King Richard (Richard Harris) is fatally wounded by an arrow while besieging a small castle in France, Robin (Sean Connery) and Little John (Nicol Williamson) return to England, where they soon run into their old friends Friar Tuck (Ronnie Barker) and Will Scarlet (Denholm Elliot). Although Robin Hood is now viewed as a hero, the rest of the band of outlaws have died or drifted away. The kingdom is falling apart because King John (Ian Holm) spends all of his time with his twelve-year-old wife, and his feud with the pope means that no mass will be held in England. Robin is stunned to learn that his ex-lover Marian (Audrey Hepburn) has become a nun, joining the church out of anger when he left. After rescuing several nuns who had been arrested by the sheriff of Nottingham (Robert Shaw), Robin and Marian rekindle their love. However, their chance for happiness disappears when a group of farmers arrive to follow Robin against John, so Robin and his friends begin training them. Angered that he was ambushed when he pursued the outlaws into Sherwood Forest, Sir Ranulf (Kenneth Haigh) convinces King John to give him enough men to crush the outlaws. Refusing to be riddled with arrows in the forest, the sheriff makes them camp in sight of Sherwood. Tired of waiting, Robin decides to fight the sheriff in single combat, but Ranulf ignores the sheriff’s orders and his men slaughter the outlaws. Having escaped the king’s men, Robin relishes his victory while planning other battles. More realistic, Marian accepts that they have no future and makes a drastic decision. 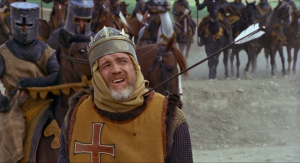 The script is relatively accurate but makes a few changes to the historical record to suit the needs of the story. Middle-aged Robin and Marian do not initially recognize each other because Robin has served Richard for twenty years, first in the crusades and then in France, which is an exaggeration since Richard’s entire reign as king of England was only ten years.

While Richard I did die of a wound from a crossbow bolt that became infected, the bolt had actually been fired from a crossbow, rather than thrown. To be honest, I find it hard to believe that you can wound someone by throwing an arrow at him. 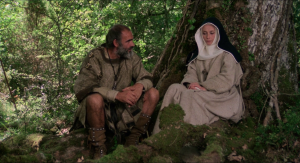 At one point, Robin and Marian talk about the Crusades, and she comments that the heathens he killed had souls, which probably reflects the sentiments of the screenwriter, since I suspect that the vast majority of clergy at the time would have disagreed with her. Trying to explain why he is tired of war, Robin claims that Richard sold the men of Acre into slavery, and had 3,000 women and children massacred. Not to diminish the tragedy of the massacre of the garrison, but that is not exactly what happened. The garrison of somewhere between twenty-six-hundred and three thousand men were executed after Saladin refused to pay their ransom. Richard could not waste food bringing them with the crusader army as it marched on Jerusalem and he would look weak if he let them go, so he chose the remaining option. 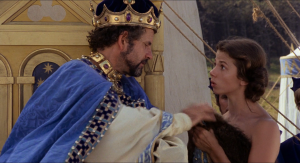 Even though Robin Hood is strongly associated with King John, there is only a single scene with John, and viewers are presumed to have a firm foundation in English history. Richard has only been dead for a short while, but the kingdom is already falling apart under John and even his barons have turned against him. Admittedly, John was a disaster as king, but it took years for him to lose the family’s lands in Europe and even longer for his mixture of cruelty and incompetence to drive his barons to revolt. Actually, there is no mention that John has lost all of his lands in France. While Ranulf is waiting to approach the king, we overhear John shouting that he will kill the archbishop if he enters England, referring to Archbishop Langton, who had been appointed archbishop of Canterbury by the pope. John’s refusal to allow the archbishop to enter England had driven the pope to place the kingdom under interdict. As an abbess, Marian will be arrested by the sheriff because all of the higher clergy have been ordered out of England, but she refuses to leave.

Desperate to go back to his tent with his very, very, very young wife, the screen John reluctantly agrees to Ranulf’s request for men. There is considerable debate over the age of John’s wife Isabella of Angouleme, since none of the medieval chroniclers actually gave her age or referred to her date of birth, there is just second-hand gossip that her original betrothed was furious that John would consummate marriage with someone so young, but he may simply had been rightfully angry that John had interfered with an already negotiated marriage. 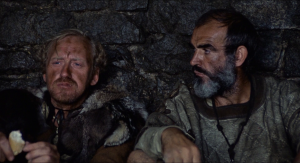 Sadly, the movie has not received the attention it deserves. Sean Connery brings humor to the role, making Robin into a human being who is feeling his age, rather than an unstoppable, relentlessly merry defender of the poor. Reaching the abbey, he is reluctant to enter, nervously commenting that Marian might be angry since he never said goodbye when he left with Richard. Later, Robin and Little John climb a castle wall, and are clearly exhausted when they reach the top.

Director Richard Lester was comfortable with swashbucklers, having previously made The Three Musketeers (1973), The Four Musketeers (1974) and Royal Flash (1975), but while he kept the action and humor, he added more mature scenes, providing an honest portrayal of men who attempt to relive their glory days, unwilling to admit that their best days are behind them. 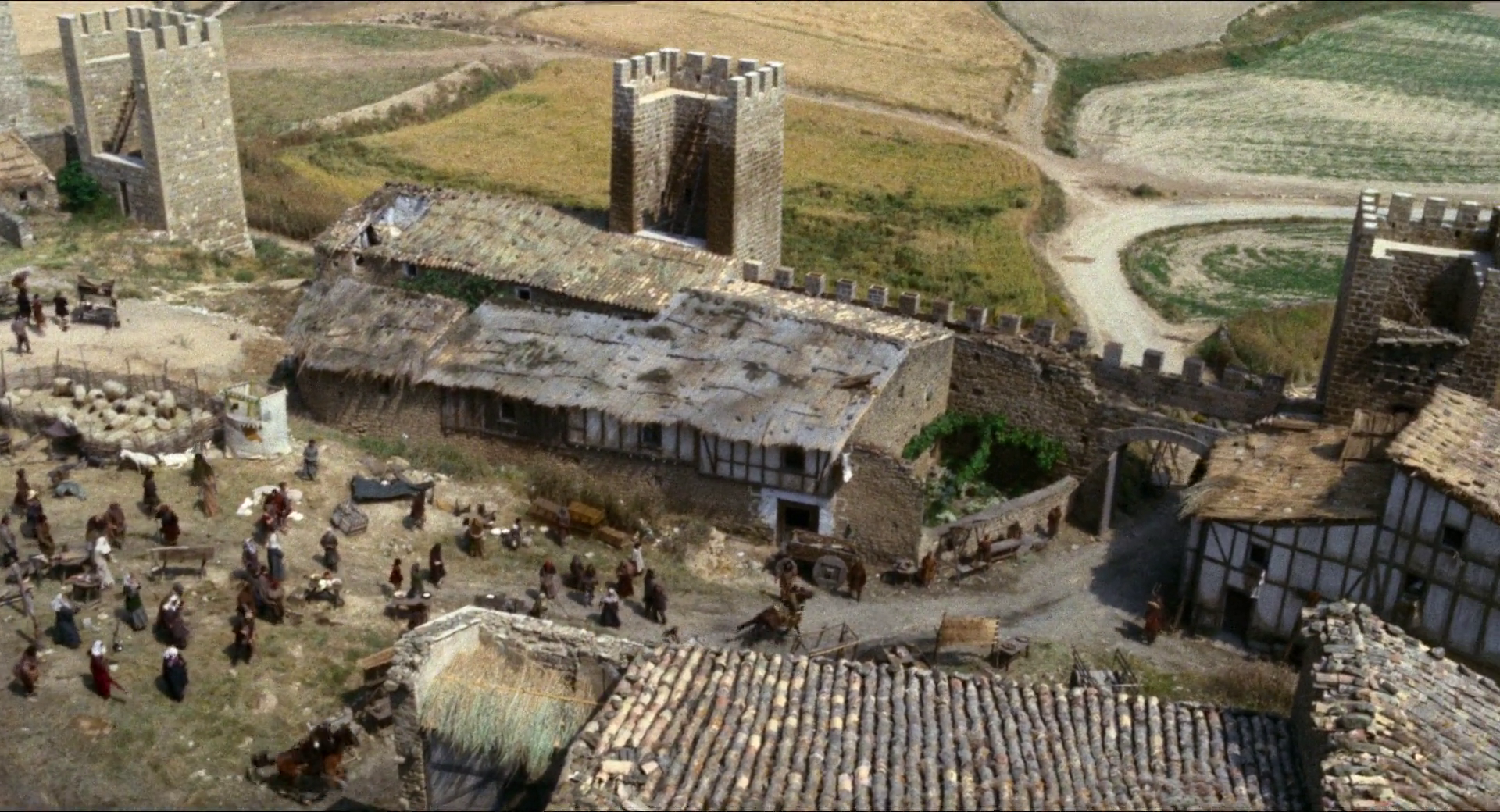 The location in the opening scene is great but looks like Spain, where it was filmed, not France, where the story is set. Still, Sherwood is a proper forest.

The script was written by James Goldman, who also wrote the script for The Lion in Winter (1968), and both movies share a similar attention to historical detail. An excellent representation of the time, the sets are realistic, rather than glossy. In particular, there is a beautiful aerial shot of the set. 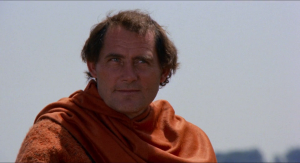 Although the movie’s title is Robin and Marian, the rivalry between Robin and the sheriff, brilliantly portrayed by Robert Shaw, is the other main plotline of the movie. The antagonist, rather than the villain, the sheriff considers himself to be responsible for public order. Faced with the dead bodies of his men after they were cut down by Robin and Little John, he comments sadly that he should have trained them better. The final duel is five minutes long, and both men are soon struggling to stand in their armor.

When Robin tries to stop Marian from surrendering herself to the sheriff, she angrily asks when will he ever grow up. Later, she wonders if he will fight the sheriff to protect her, making more corpses. There was an interesting contrast in their approaches, until the fighting starts and she takes off her habit. Although Marian gives up her vows pretty fast, she admits that she had tried to kill herself but was found and taken to the abbey. 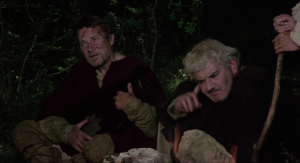 Friar Tuck was played relatively straight by Ronnie Barker, from the BBC sketch show The Two Ronnies, so much of the humor comes from Little John’s dry wit.

The end follows the stories where Robin was murdered by an abbess.

Unlike the majority of movies about Robin Hood, Robin and Marian is basically a romance. With a lot of action.