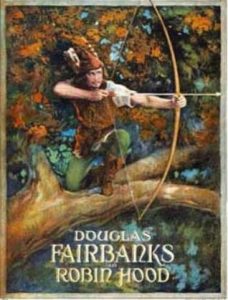 When Henry II refused to name his eldest son Richard as heir to England and Normandy, Richard allied with Philip II of France, and soon defeated Henry, who died two days later on July 6, 1189. Richard had finally inherited the crown, but he was eager to join the Third Crusade, and reclaim the Holy Land from Saladin. A crusade would be insanely expensive but squeezing revenue from his territories of England, Normandy, Anjou and Aquitaine proved easier than arranging a treaty that would allow both Richard and Philip to go on crusade without fearing that the other would take advantage of the situation to attack. More troublesome was his younger brother John, who clearly lacked either the martial ability or the plotting skills required to seize the throne directly but might try his luck if Richard would be absent for months or even years. England would be administered by William Longchamp as chancellor, supported by four co-justiciars, including William Marshal, while John was forced to swear that he would not enter the kingdom for three years. Richard’s mother Eleanor was not officially regent but the justiciars knew that they were expected to defer to her advice.After a tremendous amount of organization, the English and French kings left in the summer of 1190. On the way to Palestine, Richard announced that his nephew Arthur of Brittany was his heir, which drove John to break his promise and return to England in 1191, where he seized castles and attempted to overthrow Richard’s chancellor. 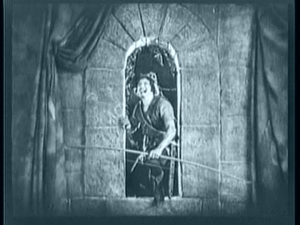 When a huge tournament is held for knights who have gathered for the Third Crusade, the earl of Huntington (Douglas Fairbanks), defeats Guy of Gisborne (Paul Dickey), and becomes King Richard’s (Wallace Beery) second-in-command on the crusade. During the celebration, Huntington intervenes when Prince John (Sam De Grasse) drunkenly drags an unwilling Lady Marion Fitzwalter (Enid Bennett) to Guy, turning John into an enemy. Falling for Marion, Huntington leaves his squire John (Alan Hale) to protect her. Prince John tells Gisborne that he will receive Marion if he makes sure that Richard does not return from the crusade. Once the king is out of the kingdom, John quickly takes control, charging high taxes on the poor. The crusaders are making their way across France when Huntington receives a message from Marion saying that John has seized power. Aware that Richard would return to England if he knew, thus ending the crusade, he decides to go home instead. Denied permission by Richard, the earl is imprisoned but is freed by his squire. A year later, rumors appear of a robber chief in Sherwood named Robin Hood, who gives to the poor. Discovering John’s treachery, Richard immediately figures out that Huntington is Robin, so he decides to return to England.

The opening narration states that it is a compound of legend and chronicle, which does sound better than a mixture of fact and fiction, even though they mean the same thing. The script is more legend than chronicle, mostly legend.

England seems to be alone in the crusade. Actually, the Third Crusade was a massive affair, led jointly by King Richard of England, King Philip II of France and Emperor Frederick Barbarossa of Germany, joined by many counts and dukes of other principalities. 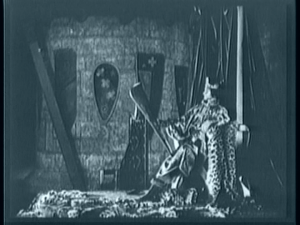 Sooo, no one told Richard that John took over?? Seriously, that is a major plot weakness. Admittedly, the real John did take advantage of Richard’s absence to try to seize power. Richard’s chancellor was so overbearing that the justiciars removed him from power in October 1191, leaving John the most powerful man in England. Traveling throughout England with his own court, John used his huge wealth to his supporters, portraying himself as Richard’s heir, while spreading rumors that Richard would never return from Palestine. However, messengers had reached Richard, who appointed Walter Hubert, archbishop of Rouen, chief justiciar. More important, when Eleanor learned that John was planning to cross the Channel to pay homage to Philip, who had left the crusade early, she worked with Hubert to force the barons to swear new vows of loyalty to Richard and threatened to confiscate John’s castles and estates if he crossed the Channel. In other words, John was grounded by his mother.

The script correctly states that Richard had signed a treaty with Saladin in Palestine and returned to England to deal with John, but skips over his capture by the Duke of Austria and the need to raise a colossal ransom. 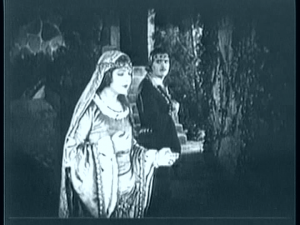 It is my first silent film so I admit that I was excited at first, but the excitement soon disappeared. The story does not move fast, it took 30 minutes for Huntington to win the tournament, save Marion from John, say “I never knew a maid could be like you” and fall in love.

The film set new records for its budget, but the lavish set and cast of thousands are worth it.

During the post-tournament banquet, Huntington and the rest of the men sit around drinking and getting into scraps where they roll around, so the king gathers all of the women, and promises land and a castle to the maid who wins him. Scared of women, Huntington is chased around by a horde of castle-hungry maids but is completely uninterested in any of them. Until he meets Marion. 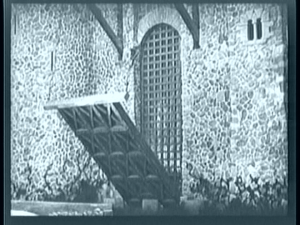 As a silent film, there is naturally little dialogue, and most of it is pompous silliness about valor and chivalry, but there is a cool exchange when Marion asks John to show mercy, and he responds that a prince at home outranks a king abroad.

Learning that John means to kill her, Marion fakes her own death while Huntington is still in France, so he does not know she is still alive. For a grieving man, Robin is very merry. In fact, Robin and his men are always grinning, and the constant leaping around is kind of creepy.

While the movie was a grueling experience, the stunts are wicked, and worthy of Jackie Chan.

To be fair, there is some history, but this is for silent film buffs only.