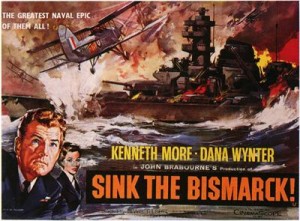 Boasting cannon that were 19 yards long, the German battleship Bismarck was considerably larger than the Royal Navy’s largest battleship, The Prince of Wales. Although the Royal Navy dwarfed the German Navy, Britain depended on maritime trade for survival, therefore German naval strategy during WWII was to avoid a direct battle and attack British shipping. After the Luftwaffe failed to gain control of British skies in preparation for an invasion, Nazi Germany decided to strangle Britain into submission by striking at the vulnerable convoys in the Atlantic. Much of the small German surface navy was kept blockaded in port, so most of the hunting was carried out by U-boats. When the Bismarck left Germany and attempted to enter the Atlantic, the Admiralty knew that it had to be stopped before it could wreak havoc among the convoys. All available warships are sent in pursuit of the Bismarck, and a total of five battleships, three battlecruisers, two aircraft carriers, four heavy and seven light cruisers, and twenty-one destroyers took part in the hunt for the enemy ship.

After a brief scene showing the launching of Germany’s super battleship Bismarck, a report by Edward Murrow in late May 1941 announces that Britain’s allies have fallen and it stands alone while Germany tries to force it to submit by bombing its cities and sinking its shipping.

Dangerously overstretched, the Royal Navy is struggling to repel the German invasion of Crete, reinforce Malta, support the Eighth Army in North Africa and guard sixteen convoys in the Atlantic, so news that the Bismarck is about to enter the Atlantic is very unwelcome. The much smaller German battleships Scharnhorst and Guisenau had sunk 22 ships in two months in early 1941, so the Admiralty planners knew all too well what would happen if the Bismarck got loose in the Atlantic. The cold and strict Captain Shepherd (Kenneth More) takes command of the Admiralty’s Operations Division on the day that the Bismarck breaks out. News that the Hood, a British battleship, was easily destroyed by the Bismarck fills the Admiralty with despair.

After all other efforts have failed, Shepherd deduces the Bismarck’s destination, so it becomes a race to catch the ship before it can reach the safety of a French port.

It is not a subtle film. Admiral Gunther Lutjens, commander of the Bismarck and its escort, constantly talks about his pride in being a Nazi and how he, like Germany, was ignored after WWI. He is filled with confidence even though the Bismarck was sent to sea with only one heavy cruiser as escort, instead of several battleships and heavy cruisers as was originally planned, because the head of the German navy knew that the surface navy would be ignored if it did not achieve a steady stream of victories. The real Lutjens had protested strongly against sending out the navy teaspoon by teaspoon and had wanted to wait until other ships like the Scharnhorst, Guiseneau or the Tirpitz, the Bismarck’s sister ship, were ready. However, the screen Lutjens’ reaction to the surprising destruction of the Hood gives a hint of the fierce competition between Germany’s surface navy and the U-boats for Germany’s limited resources. His second-in-command wants to return home after their glorious victory but Lutjens knows that all the Fuhrer cares about are sinking convoys.

When the Bismarck is found by two British battleships, the Hood and the Prince of Wales, everybody in the Admiralty expects the Hood to end the threat but there is no mention that the Hood was the pride of the British fleet and the German sailors’ nightmare. The screenplay also fails to explain that the Hood’s commander had planned his attack badly and chose not to coordinate with the cruisers shadowing the Bismarck. It is not as if there was not a precedent since a similar situation had occurred much earlier in the war when the German pocket battleship Graf Spee had been beaten by a British heavy cruiser and two light cruisers that had attacked from both sides.

Despite the lengthy search, the British would never have found the Bismarck if Lutjens’ fixation on promoting the cause of the surface navy had not driven him to repeatedly send really long messages to Germany, which enabled HF/DF receivers to triangulate his rough position.

Much of the story takes place in the Operations Division’s control room where hard choices often have to be made. The scenes in Operations Division have a slightly claustrophobic feel to them and the personnel seem divorced from reality because they are so far underground that they do not even know if an air raid is taking place in the city above them or not.

Since the film was made with the active support and assistance of the Admiralty the top leaders are seen through rose-tinted glasses. Instead of the worn-out meddler that he was, the First Sea Lord is played as a tough, decisive man, who stands back and lets his subordinates do their jobs. Prime Minister Winston Churchill makes no appearance in the film except for one scene where his voice emerges from a speaker phone like God from Heaven as he orders the staff of the Operations Division to do what is necessary to sink the Bismarck. In reality, Churchill resembled more an annoying, nagging, elderly god on the verge of retirement, who frequently popped in with hunches that turned out to be completely wrong.

While the majority of characters are based on real people, the story is told mainly from the point-of-view of Shepherd, who is a a fictional character.

Although the efforts of Shepherd’s assistant to thaw out his heart are admittedly charming since Dana Winter could have probably made reading the phone book seem alluring, there is not enough time left over to provide sufficient background. While the desire to add a personal element to the story is understandable, turning the hunt for the Bismarck into a matter of revenge for Shepherd because its commander had sunk his ship trivializes what was perceived as a major threat by the Royal Navy.

Oddly enough for a film set at sea, cinematography is not its strong point. However, it gives an accurate portrayal of the long-distance nature of combat between battleships, which was essentially an artillery duel at sea where binoculars were needed to see the enemy clearly. Furthermore, the movie shows the agonizing guesswork involved in searching for a tiny speck in the vast ocean, and the scenes of carnage that follow each battle are chilling, especially when men are left inside a flooded compartment.

In the end, Lutjens’ devotion to Hitler is not reciprocated, so Shepherd gets the ship and the girl. While entertaining, the movie’s greatest weakness is that the story is mainly presented from the British viewpoint, primarily that of Operations Division. All in all, it is a good movie that never manages to rise above workmanlike standards.