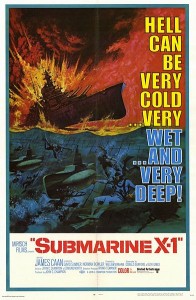 The British Navy had no desire to repeat the nerve-wracking hunt for the Bismarck in May 1941, the Tirpitz’s sister ship, so the goal was to sink her before she could even be commissioned. The fate of the Bismarck discouraged Admiral Raeder, the head of the German navy, from letting the Tirpitz into the Atlantic. Instead he sent her to Norway to solidify German control of the country and to threaten Artic convoys bound for Russia. Numerous bombing raids had failed to sink the Tirpitz, so three powerful British battleships had to be kept in home waters to counter any sudden sorties. The continued existence of the Tirpitz meant that all Russian-bound convoys had to be escorted by battleships, which were desperately needed elsewhere.

By January 1943, the Tirpitz had been joined in its fjord by the the battlecruiser Scharnhorst and the pocket battleship Lutzow, which led to a renewed attempt to sink the German ships, but it would not be easy. The entrance to the fjord was protected by anti-submarine nets and was lit every night by floodlights. The outer fjord was also protected by anti-submarine nets and guarded by patrol boats and shore batteries. Anti-aircraft batteries ringed the tops of the cliffs, troops patrolled to ensure that Norwegian saboteurs could not reach the ship and there was enough smoke screen equipment to cover the entire fjord. Since repeated bombing attempts had failed to produce any other result other than losses among bomber pilots, the Royal Navy had spent a year building midget submarines (X-craft) and training crews with the sole objective of destroying the German warships in their Norwegian lairs.

James Caan plays the captain of a British submarine that was sunk by the German battleship Lindendorf (modeled on the Tirpitz), and is assigned to head up a top-secret project to destroy the warship. The Lindendorf is snug in a Norwegian fjord where smoke machines make aerial bombardment impossible and anti-submarine nets protect it from torpedoes. However, the British Admiralty hopes that the X-craft will be able to penetrate the anti-submarine nets and get close enough to attach a bomb.

There seems to have been no need to rename the Tirpitz the Lindendorf but it is appropriate since there is no mention of the hunt for the Bismarck, the Tirpitz’s sister ship, the other heavy German warships stationed in Norway that were also targeted by the X-craft, or even the many attempts to bomb the Tirpitz. In fact, there is no context whatsoever other than that the story takes place during WWII.

At one point, a team of German paratroopers land at the British base in an attempt to destroy the X-craft but they are defeated after heavy fighting. While it is a well-orchestrated action scene and one of the more entertaining parts of the movie, it is also simply ludicrous. If the Germans knew about the X-craft, they would have simply strengthened the anti-submarine nets. The X-craft’s greatest weapon was surprise, so it could not be used more than once.

Although two X-craft successfully penetrated the perimeter on September 22, 1943, the damage received by the Tirpitz did not sink it, but put it out of action until the following spring. In the end, the Tirpitz was finally sunk on November 12, 1944 by two 12,000lb bombs designed by Barnes Wallis, who had also designed the bouncing bombs used to destroy the dams in the Ruhr Valley in May 1943.

Aside from the X-craft, which receive a relatively accurate portrayal, almost all of the actual events are absent in the movie. In particular, it ignores the six-day-long trip from Scotland to the fjord where the midget submarines were towed behind regular submarines and half of the X-craft were lost or damaged so badly that they could not continue with the mission. Presumably the director and screenwriter could not figure out how to make this part of the story interesting so they just moved on. This omission symbolizes the key problem with the movie, namely that instead of focusing on the X-craft, the screenplay concentrates on presenting Caan’s character as the alpha male. The other characters are essentially there to show that they do not measure up, which is pretty insulting to the real men who performed the actual operation.

Unfortunately, I lost my original notes and had to watch the movie again, which I quickly realized is one time too many.

The movie contains a number of the worn-out plot ideas that have appeared in countless other movies where a group of people have to work together to accomplish an objective. Only four other men had survived the sinking of the submarine and they all volunteer to join the secret project. Since they blame Caan’s character for the destruction of the sub, the stage is set for character conflict. There is also the crew member who can not handle the training but can not be replaced by someone more qualified because they barely have enough people as it is. If it seems odd that the Admiralty would not recruit more men than were needed in order to ensure that they had the best for such a vital mission, that is because they did, maybe that is why they won the war. Actually, each member was given two opportunities to drop out of training. Finally, the captain is a hard-ass, merciless instructor because he is being pushed by the Admiralty but he refuses to appear weak by explaining the situation to the men. In fact, a major theme of the movie is that the really big jobs require a cold heart and nerves of steel. The only plot devices missing are the ethnic minority who eventually wins the admiration of his comrades and a love triangle.

Caan’s character is Canadian to avoid having to attempt a British accent and he is completely lifeless apparently to avoid acting.

Some historical movies are extremely faithful but lack the skilled direction needed to make the history come alive while other films twist the facts but are beautiful and moving. This film is neither. It is simply a run of the mill movie that lacks any real creative spark or a proper understanding of the events.