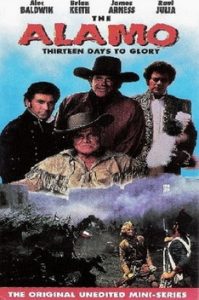 William Travis (Alec Baldwin) and Jim Bowie (James Arness) share command of the Alamo, but disagree over how to best defend the fort. However, they are supported by Davy Crockett (Brian Keith), who led a band of volunteers from Tennessee. When the Mexican army appears much sooner than expected, Travis sends messages to Colonel James Fannin, commander of the garrison of Fort Goliad, and Sam Houston (Lorne Greene) asking for help. Unfortunately, Fannin is reluctant to risk his troops to relieve the Alamo, and Houston has no army to send. As the siege progresses, Santa Anna (Raul Julia) becomes increasingly impatient with his officers’ failure to capture the fort, causing British colonel Blake (David Ogden Stiers), a member of Anna’s staff, to fear that Anna is mad.

Once again, I suspect that I am devoting too much time to exploring the many inaccuracies of a film that no one has seen or will see, but that is what I do, so here goes.

Bowie and Travis genuinely dislike each other, but gradually develop a grudging mutual respect. The script correctly shows that most of the volunteers followed Bowie. Command falls to Travis after Bowie is hurt when he is knocked off a wall by a cannon shot several days into the siege, which probably sounds more heroic than the real man, who developed tuberculosis due to a weakened immune system caused by lengthy drunken binges. Reinforcements finally arrive, for Santa Anna, while the rebels learn that Fannin is not coming. Fannin is presented as reluctant to risk his life to save the Alamo’s garrison, which is a harsh yet deserved treatment of the real Fannin, who was an extremely indecisive commander.

Bowie and Travis agree on little, but they want to defend the Alamo to give Houston time to build an army. Unknown to them, the screen Houston is negotiating with the Cherokee when he receives the messenger asking for reinforcements, and replies that he does not have an army and the politicians can’t make a government, so he needs men and gold from the US. Angered by Houston’s inability to save the Alamo, Travis’ messenger calls Houston a coward. It is the most negative portrayal of Houston that I have seen, and unfair. Admittedly, the real Houston did negotiate a treaty with the Cherokee, but he learned that the Mexican army had appeared at San Antonio de Bexar at the same time as the rest of the delegates to the convention. Moreover, the dismissal of the politicians as being unable to make a government is erroneous. In the movie, the siege of the Alamo forces the temporary Texan government to rush to hold a convention to declare independence. Actually, the convention was held on schedule, and had been arranged several months earlier. Given the delay in receiving messages from the Alamo, the convention was not even aware of the full danger in time to save it.

The screen Santa Anna wants to attack the Alamo, rather than bypass it, to avenge the dishonor of his brother-in-law’s surrender of the fort several months earlier. In reality, Santa Anna wanted to capture the Alamo because it guarded one of the main routes into Texas, and he intended to destroy the garrison as a warning to the rest of the rebels.

Making the conflict personal, Santa Anna is Bowie’s cousin on his wife’s side, and the two men used to be very close. Presumably, the screenwriters felt that it would add some drama to the script, but there was no connection between the genuine Bowie and Santa Anna.

It is never explained why Colonel Blake is on Anna’s staff. Apparently, he brought the British muskets used by the army, and I think the script is suggesting that the British government is somehow involved. Anna repeatedly taunts Blake that his government could not deal with their own rebels, leaving the problem to him. Blake thinks Santa Anna is mad, and the real man was a bit crazy, possibly addicted to opium.

The rebels claim to be loyal to the 1824 constitution, which lured 40,000 Americans to become citizens to settle Texas until Santa Anna revoked the constitution, taking away their rights. Ooooh, there is so much wrong with that statement. Admittedly, there were 40,000 American immigrants in Texas at the time of the revolution, but the original colony in 1823 had three hundred colonists. Worried that unrestrained American immigration would transform a Mexican state into an American colony, the Mexican government passed a bill on April 6, 1830 that banned further American immigration. It is true that the Texans claimed that they were loyal to the 1824 constitution, even though it outlawed slavery and refused to allow non-Catholics to settle in Mexico. Its main attraction was that it had been revoked by Santa Anna, so the colonists could pretend that they were still loyal citizens of Mexico, part of the growing federalist movement, which was trying to overthrow Santa Anna, even though they were separatists who wanted to break Texas off from Mexico.

Crockett is shown as an old warhorse, who led his own band of volunteers, even though the real Crockett had simply come to Texas to start over after losing his campaign for re-election to congress, and joined the garrison at the Alamo to put some military service on his resume in preparation for his political career in Texas. However, the script does capture his desire to win political office in the new republic.

One of the few good scenes occurs when the men are exhausted at night, aware that no one is coming, waiting for the attack. I like the young girl who gets her boyfriend to ask her to marry him so they can have sex before he dies. Travis’ servant Joe (Hinton Battle) even arranges for them to use Travis’ bed.

Sam Keith is too old to play Crockett, but should have played Houston.

The film sinks to new levels of heroics. At least, this version dreamed up some new inaccuracies. Honestly, it is better than several versions in the 1940 and 50s. Please do not misunderstand, I am not saying that it is good but there are worse.

It is a pity, director Burt Kennedy wrote several of the scripts for the Ranown westerns, the best westerns you have probably never seen, and was a relatively successful director of westerns, but this was made near the end of his career.

Raul Julia clearly had fun playing Santa Anna, more fun than I had watching the movie.