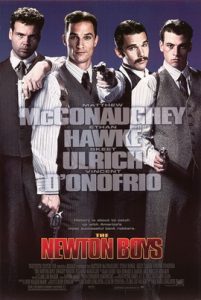 The Newton brothers grew up poor, and two of the brothers, Dock and Willis, drifted into crime at an early age. After serving time in prison, twenty-year-old Willis graduated to robbing banks in 1919. A lucky break occurred when an agent of the Bankers Association in Texas retired and sold the names of banks in Texas with safes that could easily be blown up with nitroglycerine. Working with experienced safecracker Brent Glasscock, Willis recruited his brothers Joe, Jess and Dock. The Newton brothers had a successful crime spree for several years, robbing numerous banks across the United States, and even crossing the border to hit several banks in Canada. However, it became increasingly hard to find banks with weak safes, so they decided to hold up a mail train near Chicago on June 12, 1924, using information provided by a corrupt politician and a postal employee, which proved to be their downfall. Joe opposed the raid, arguing they would be hunted forever due to the huge amount, but took part out of family loyalty. The raid went as planned until the engineer missed the right stop, and Glasscock panicked in the dark, mistakenly shooting Dock. Police found Joe and Willis when they were trying to find medical help for Dock in Chicago. Willis attempted to bribe his way out but it was too big a case, since the gang had stolen $3 million. Fortunately, no one had been hurt and most of the stolen money was recovered, so they received relatively light sentences.

Tired of picking cotton, Willis Newton (Matthew McConaughey) begins robbing banks at night with Brent Glasscock (Dwight Yoakam) a safecracker, after a corrupt banker sells them a list of banks with square safes that can easily be blown open with nitroglycerine. Realizing the need for extra hands, his younger brothers Joe (Skeet Ulrich) and Jess (Ethan Hawke) are brought in to stand guard outside during night jobs, joined by his older brother Dock (Vincent D’Onofrio) after he escapes from prison. The gang robs many banks, including two banks at the same time in Hondo, Texas, in 1921. Jess and Dock spend all of their money in night clubs, but Willis invests his share in an oil field, while Joe starts dating a nice girl. Willis falls for Louise (Juliana Margulies), who thinks he is a gambler. As more banks switch from square, standalone safes to more secure bank vaults, the gang expands its operations to Canada, and even attempts to steal money transported from the Toronto Clearing House to individual banks by lightly armed guards, which results in a shootout. Hoping to become a legitimate businessman and take advantage of the booming oil industry, Willis puts all of his money into an oil well in 1924, but bigger companies use more powerful machinery to suck up the oil before his well could reach the oil, so he returns to robbing, and Louise leaves him. Since few banks have square safes anymore, he accepts a former partner’s offer to rob a mail train in Chicago even though Joe warns that they will be hunted forever.

The script is actually quite accurate, which happens less often than I would like.

During a reunion with his family in 1919 at the beginning of the film, Willis comments that he has spent the last year picking cotton after being released from prison, and was about to marry his boss’ daughter until someone mentioned he is an ex-con. The owner wanted him to keep picking cotton though. The story is true and reflects the real Newtons’ limited career opportunities. Breaking horses paid relatively well but was young men’s work. The brothers had grown up picking cotton, and saw little future in that career path.

The movie is based on the book The Newton Boys, where Willis and Joe Newton related their life stories, and Willis frequently complained about the corrupt policemen and sheriffs that he dealt with over the years. One of his favorite examples was presented faithfully in the film when Willis and Joe are arrested after a maid notices guns in their suitcases. The local sheriff frames them for the robbery of a local movie theater until Willis trades a diamond stickpin for freedom.

One of the film’s strengths is the presentation of the mechanics of robbing a bank, especially Glasscock’s explanation of how to use nitroglycerine to blow safes. Gel is placed along the door and a space is made to hold the nitro, then light a fuse and move away. Boom. Like the real gang, they drive Studebakers because they are dependable, inexpensive cars, they rob in the winter when people were more likely to stay at home, they carefully map escape routes and they saw through the telephone wires before each robbery. While it sounds easy, it could take as long as an hour to cut the alarm wires and start cracking the safe.

While the script sticks relatively closely to the historical record, a little more context would have been helpful. For example, during a trip to Canada, Willis notices that banks send their money to a clearing house and the money is then returned to the banks the next day, with only two guards per delivery. Greedy, Willis convinces them to try for all of the bags, which begins as a farce and ends in a shootout where several guards and policemen are wounded. Admittedly, the real gang did hold up one of these deliveries but the script does not explain that each Canadian bank issued its own currency at the time, so the money was sent to a clearing house where it would be separated and returned to each respective bank the next day. Every bank sent two messengers and a guard, but the guards were only armed with small pistols. The entire process seems overly complicated and dangerous, which is why the real Willis decided to rob the Toronto Clearing House on July 24, 1923. Several of the messengers simply ran away during the robbery, so they only got two bags and a guard was injured. Actually, the gang made two trips to Canada. The previous year, an old bank robber had led them on a trip to Canada, where banks still used old safes that were easy to blow, so they robbed three banks in Manitoba and one in Ontario.

After Willis loses all of his savings in a failed oil well, he returns to crime, and a former partner introduces him to a postal inspector with big gambling debts, who sells information about a postal train transporting a huge amount of currency from the Federal Reserve to several banks along the route. Hard to believe as it may be, the Federal Reserve did send money to banks by registered mail. The movie meticulously presents the robbery and the manhunt that eventually captured every participant in the robbery, even Jess, who had fled to Mexico but was lured back across the border for a rodeo competition only to find himself under arrest.

Ethan Hawke plays Jess as a ladies’ man, as well as the comic relief, telling angry townspeople to go back to sleep after they were woken up by the explosion of the safe and the fire alarm during a robbery.

A romance between Willis and Louise is crammed into the script to broaden the audience. The scenes with Louise at the end are horrible, genuinely painful to watch.

The film ends with real Joe Newton’s appearance on Johnny Carson, which is a treat.

The script is relatively accurate but Linklater’s direction is merely adequate, resulting in a film that lacks life. Having achieved critical success with the low-budget independent films Slacker (1990), Dazed and Confused (1993) and Before Sunrise (1995), The Newton Boys was Linklater’s first Hollywood film, and he would avoid action films afterwards.