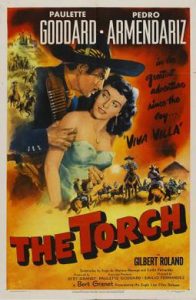 Maria Dolores Penafiel (Paulette Goddard) is preparing for her wedding, when rebels led by General Jose Juan Reyes (Pedro Armendariz) suddenly take over the town. The wealthiest residents are gathered in order to encourage them to contribute to the revolution. Robert Stanley (Walter Reed), her fiance, is an American doctor, and is treated well by the general, but he promptly goes to Mexico City to buy a wedding dress. A chance encounter with Maria Dolores causes the general to fall in love with her, attracted equally by her beauty and her temper. Later, the general saves Don Carlos Penafiel (Julio Villareal), her father, from a firing squad arranged by an over-eager subordinate, who figured that it will be done sooner or later, so he might as well get it over with. As the general’s pursuit intensifies, Maria Dolores begs him to leave her alone, contemptuously commenting that he is better-suited for one of the soldaderas, and the general reacts with fury, informing her that she is not worthy to be compared to the poor women who serve without complaint to be with their men. Later, Father Sierra (Gilbert Roland), Reyes’ old classmate, explains that the general wants people to be equal, sharing the same goal as Christ. Reyes is about to apologize when he learns that influenza is spreading through the town. Taking charge, the general imposes quarantine, while Maria Dolores volunteers to treat the sick. Learning that federal troops are approaching, the general retreats in order to spare the town. Relieved, Don Penafiel organizes the wedding for his daughter, who is about to sign the wedding register but has second thoughts when she hears the rebels marching by.

The movie is a love story set in the Mexican Revolution, so the script is light on details. In fact, it is not clear if the rebels are fighting against Huerta or Carranza. Although the script does not state which rebel faction occupies the town, it is located near Mexico City, and that region came under the control of the Zapatistas.

The scene where the rich men of the town are coerced into contributing to the revolution is an accurate portrayal of the rough administration imposed by many generals during the revolution. Some attracted efficient administrators, and left the operation of captured territories in their hands in order to ensure stable revenue, others simply used their power to take what they needed. Sadly, government rule was often erratic. When Carranza was president, his generals were usually outsiders who viewed their assignments as opportunities to loot. General Reyes is honest, but employs harsh methods. The schoolmaster was dragged there because a poor peasant soldier thought he looked rich, but is let go. In fact, the general pays his back wages and raises his salary. However, the richest merchant had cornered the market for food and raised prices, so he is dragged off to a firing squad.

The plague that rampages through the town is part of a global influenza epidemic. War-tron Mexico proved vulnerable to the influenza epidemic that spread across the world in the aftermath of WWI. Roughly 300,000 people died in Mexico, while estimates of global deaths range from 50 to 100 million.

The first encounter between the general and Maria Dolores is fierce. When she raises her skirt to climb some steps, he comments that he would take a bath if he could have another look at a leg, Insulted, she slaps him, and he decides that he wants to marry her.

Paulette Goddard does not look Mexican but she is the associate producer. To be fair, she has a very expressive face and a talent for physical comedy.

The Torch is an English remake of director Fernandez’s film Enamorada (1946). Although the director had kept the same leading man and cinematographer, the script was changed by Bert Garnet, who was also the producer. Fernandez was a famous director in Mexico, but is probably best known to Western audiences as the Mexican general who hires the outlaws to steal American rifles in The Wild Bunch (1969), another movie set in the Mexican Revolution. I understand why Fernandez kept the same cinematographer, since he does excellent work with shadows. Furthermore, the scene of people blowing glass and twirling the heated glass to make shapes in the beginning of the film is fascinating.

The emotional tone of the movie shifts dramatically from the tense interrogation of the rich men to farce when Maria Dolores sets off a powerful firework to shock the general off his horse, destroying the candlemaker’s shop in the process. Later, there is an emotionally harsh scene where the general promises his adopted daughter Adeli (Antonia Daneem) that she can fire his pistol if she lives. However, I was especially moved by a scene where a grizzled major tells the general that it takes a real man to ask for forgiveness, rather than value his pride above all.

In the end, the film is a romance, so the courtship occupies most of the story. A furious argument between General Reyes and Maria Dolores on either side of a thick door at Don Penafiel’s house shows that they have clearly met their respective matches. Then his enforcer delivers flowers the next day, convincing the maid to accept them at gunpoint. Honestly, the entire courtship is charming, but the standout scene occurs when several soldiers serenade her one night. I really wish the original was available with English subtitles.

Enamorada used the song La Adelita from the Mexican Revolution, but it is replaced by La Cucaracha in this version because American audiences were familiar with the song. Furthermore, soldaderas is translated as camp followers, which some people may view simply as prostitutes who followed the army, but more likely meant the women who performed all of the domestic chores of the soldiers, including cooking meals, and were often wives or relatives of soldiers.

A mix between Shakespeare’s play The Taming of the Shrew and Morocco, viewers won’t learn much about the Mexican Revolution but it is entertaining.