Frustrated that the PT boats are not valued by the admiral in charge of naval units in the Philippines, Lt. Rusty Ryan (John Wayne), second-in-command of the squadron, informs Lieutenant John Brickley (Robert Montgomery), the squadron’s commander, that he will apply for a position on a destroyer. Hearing the news that the Japanese have attacked Pearl Harbor, Ryan tears up the application. Although the naval command initially confines the PT squadron to messenger duty, after they prove their ability by sinking a Japanese cruiser, the squadron is given more dangerous missions. Meanwhile, Ryan has started a romance with Army nurse Sandy Davyss (Donna Reed). As the Japanese gain more control of the Philippines, the fighting takes its toll on the squadron. When all of the boats have either been destroyed or abandoned, the surviving crews are sent to fight with the remaining infantry, while Brickley, Ryan and two ensigns are evacuated in order to train PT squadrons in the United States. 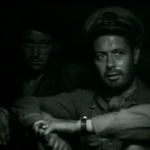 The title of the movie is an accurate description of the situation. After the Japanese invade, the admiral explains to Brickley that the force in the Philippines will have to take one for the team, while the United States prepares to fight back. The simple theme that they are expendable is repeated throughout the film. When surplus crew members are assigned to a naval battalion, Brickley grimly admits that he wishes he could say help is coming, but it would not be true. At the end of the film, when Brickley, Ryan and the two ensigns are waiting for the plane to take off, knowing that everyone left behind will be killed or captured, Brickley says we are going home to get ready to come back.

Although the characters accept their dismal prospects without complaint, the story is quite bleak. Understandably, since only five out of the sixty-eight men in the real squadron made it out of the Philippines alive. The remainder either died in the fighting or spent the rest of the war as prisoners. 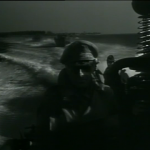 Once defeat becomes inevitable, the squadron transports General Douglas MacArthur, his family and his staff to Mindanao, where they are evacuated to Australia. When MacArthur arrives at the squadron, he is greeted with awed, reverential silence. Director John Ford greatly admired MacArthur, so he stands on the deck like a living icon, not the violently seasick old man that he was. The movie even ends with MacArthur’s quote “We shall return,” except that he actually said “I shall return” because he had an ego of epic proportions, which prevented him from acknowledging the existence of the hundreds of thousands of men who would risk their lives during the fighting.

The battle scenes are well-done and show how the squadron was gradually worn down while fighting a considerably more powerful enemy. Unlike propaganda films made during the war like Bataan (1943), where each American soldier is worth ten Japanese soldiers, the Japanese are presented as a deadly enemy who take a toll on the squadron during each encounter. The final climatic battle between the two remaining PT boats and a Japanese cruiser may appear to have been a figment of the screenwriter’s imagination, but it is actually a faithful depiction of the real battle. 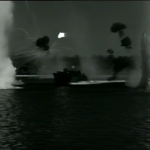 The movie is based on the best-selling 1942 book about the real-life exploits of Lieutenants John Bulkeley and Robert Kelley. After receiving the Medal of Honor for his work with the squadron, Bulkeley had become famous for safely transporting MacArthur and his entourage 620 miles from Corregidor to Mindanao. The book had been the idea of Secretary of the Navy Frank Knox, who wanted to boost public morale in the early stage of the war. Ford had initially been unwilling to make the film, since the stark truth of the failed defence of the Philippines did not match the emphasis on flag waving and gung ho patriotism prevalent in Hollywood in 1942. However, Ford changed his mind after he came to know Bulkeley during 1944. After smuggling spies from England to France, Bulkeley had commanded a fleet of PT boats that patrolled near the French coast to protect the invasion force during the Normandy landings. Growing to respect Bulkeley, Ford was determined to ensure that the real man was portrayed in the film, not a two-dimensional patriotic cardboard cutout. Since Bulkeley refused to be involved with the film, one of his officers served as technical adviser.

Ford and writer Frank Wead successfully resisted MGM’s attempt to add character development to the film by including a subplot involving Bulkeley’s family and flashbacks to Kelly’s home life. Ford also refused to add an epilogue where Bulkeley returns to the Philippines with MacArthur’s invasion in late 1944 because the real man was serving in Normandy at the time. While the executives at MGM were annoyed, Ford’s devotion to the facts won the approval of Bulkeley, who stated that although Ford had cut out many details to fit the story into a film, the result was surprisingly authentic.

Having served as Bulkeley’s executive officer in a PT boat squadron in the Southwest Pacific, Robert Montgomery was the ideal choice to play Brickley. Even Bulkeley admitted that Montgomery ‘s impersonation of him was accurate. He also thought that John Wayne captured the real Kelly’s mix of bravery and impetuousness, although Kelly disagreed and sued MGM. The relationship between Ryan and Davyss was based partially on Ford’s own pursuit of his wife, who was an army nurse, and the wound that brings them together is similar to the one he had received while filming the battle at Midway. 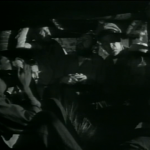 The romance between Ryan and Davyss is one of the movie’s strengths. Sent to the hospital to have a wound treated, Ryan is relentlessly prickly but Davyss melts his heart. A scene where they talk quietly to each other in a darkened dance with the sound of shelling in the background is particularly charming. When Ryan invites her to dinner at the base with the officers, the desperately lonely men are happy to just stare respectfully at her. John Ford is famous for his stock company of actors, which served as an extended family, and his films always contain similar communities. Even though supplies are scarce because of the war, the entire squadron is mobilized to hold a dinner party, and a group of the sailors serenade her from beneath the floorboards while grizzled veterans elbow each other as they compete for the solo. Unlike most movies of the period, the war repeatedly intrudes into the romance, until Davyss finally disappears during the chaos of the fall of Bataan. Realizing that Reed was a better actress than Wayne, Ford focused the camera on her reaction to his voice when Ryan called Davyss for the last time. 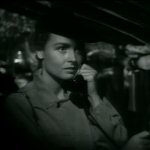 Uncomfortable making a huge salary when the war was still going on, Ford donated his salary to fund the construction of Field Photo Memorial Home, which became a gathering place for veterans of his war-time film unit.

The names were changed because the Navy forbade living members of the service being played on-screen under their names.
Having seen the war firsthand, Ford was incapable of producing an airbrushed, bland patriotic version. Instead the film is surprisingly rich and poetic, especially in its use of shadow. Just before a key mission, the officers visit another officer who is expected to die in days. Their fake cheer is matched by his own until the painful visit ends, and the men walk silently through the dark, shadowy tunnel. 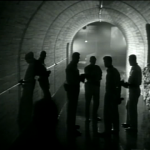 Stagecoach (1939), directed by John Ford, had brought Wayne out of a decade-long purgatory in B-movies. After Pearl Harbor, all able-bodied males in Hollywood enlisted, either serving in the military like Montgomery, or making propaganda like Ford. However, Wayne was one of the few exceptions who chose to remain safe in Hollywood, and since all of the major stars were in uniform, his career immediately took off. Rapidly progressing from supporting actor to leading actor, Wayne established a screen persona of an independent man impatient with rules. Scripts were tailored around the persona of a man who does what he wants. Reunited with Ford and accepting a supporting role, Wayne’s performance is surprisingly restrained. In fact, Ford clearly refused to let Wayne run wild. On two occasions, Ryan wants to be a  hot-headed lone wolf, and on both occasions Brickley reminds him that he is part of the military and has to obey orders.

The movie may appear unbearably wholesome to modern viewers but it showed post-war audiences the hard choices and sacrifices that had been made early in the war.