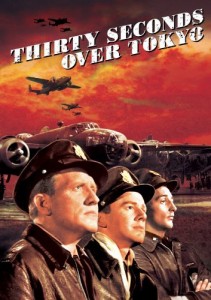 The crews of 24 bombers are sent to an airfield in Florida, and are told only that they will be out of the country for three months on a secret mission. In fact, secrecy is so important that the officers and their wives are given their own hotel. The hints gradually emerge, especially when a naval officer arrives to train them how to takeoff from a ridiculously short distance. One of the bomber pilots, Lt. Ted Lawson, is recently married, and he worries about his pregnant wife. After completing their training, the crews fly to San Francisco where their bombers are loaded on to the carrier Hornet. Once the carrier is at sea, they learn that their mission is to bomb Japan. The raid goes smoothly, but Lawson is badly injured during a landing in China. Although the crew is found by Chinese guerrillas, Lawson’s faces a daunting ordeal, since his injury is life-threatening.

The movie was made in 1944 so American audiences already knew all of the details of the raid and that it was intended to be a morale boost after Pearl Harbor and the string of Japanese victories in the Pacific. As a result, the story is told from the perspective of the pilots, who do not even know the mission until more than halfway through the movie. Based on Lawson’s book, the script is an extremely faithful adaptation, capturing the good-natured joking between the aircrews and explaining how Lawson’s plane earned the nickname Ruptured Duck. While the movie naturally focuses on Lawson, it does not neglect the rest of the pilots, presenting their personalities perfectly. Unfortunately, the script did not include Lawson’s statement that the whole bombing run took only thirty seconds, which is where the title of the movie and book comes from.

The main difference between the book and the movie is the emphasis on Lawson’s experience. The training, the trip on the Hornet and the raid itself were covered relatively quickly in the first two-fifths of the book, and the remainder is devoted to Lawson’s ordeal in China and recovery back in the United States. However, the movie is divided into four parts: the training, the carrier, the raid and China, so there is no real climax. Even the bombing of Tokyo is presented in a relatively low-key fashion, where the scene itself had little drama, and did not stand out from the rest of the film.

An aerial shot of the Hornet shows how small it was when compared to regular airfields, which helps the viewer better appreciate the challenge of flying a bomber from an aircraft carrier.

Aside from a number of changes introduced to satisfy the Production Code, a few other alterations were made to help the war effort. The screen Lawson receives a friendly welcome from his roommates on the carrier, but in reality they resented both sharing their already limited living space, and having their carrier turned into a ferry. Their attitude changed noticeably once they learned the nature of the mission, and they did let him sleep in a bunk, taking his cot instead. The script neglects to mention that even though the Hornet was guarded by its own escorts and a second carrier group, the fleet would be quickly destroyed if found by the much more powerful Japanese navy, and that the United States had risked half of its entire Pacific fleet on the mission. When the carrier group is discovered by a Japanese patrol boat, the screen pilots are excited to leave early but the script ignores the disturbing fact that the mission had basically turned into a suicide mission. The real pilots had already spent most of the trip worrying that they did not have enough fuel, so the extra distance meant that they would not be able to reach the airfields. Instead, the pilots are worried that they will now attack during the daytime, instead of night when they would have had surprise on their side. Most important, the script overlooks the savage Japanese retaliation that cost 250,000 Chinese lives for America’s morale boost.

Once the raid starts, the film focuses on Lawson’s plane, since the crews had no contact with each other, although a few planes actually passed each other on the way to their respective targets. As shown in the movie, Japanese fighters did let the bombers pass, but the script does not explain that the insignia on the bombers was similar to the Japanese insignia.

The crash landing is surprisingly accurate, although Lawson’s injuries were even worse, since he had smashed his face up and lost his teeth when he went through the windshield, as well as hurt his leg. The movie captures the Americans’ fear and confusion, and correctly shows that the injured aircrew were carried in uncomfortable sedan chairs. The movie pays tribute to the huge effort made by the Chinese to get the Americans to safety and to care for them, literally carrying them for miles and miles, risking death if discovered by the Japanese.

The movie has the innocence of the war years, admittedly an artificial innocence imposed by the movie production code, so it seems a little strange now. Newly married couples slept in separate beds. The production code was so strong that incidents that were not considered controversial in the book have been eliminated from the movie. Given an entire hotel to themselves, the pilots and their wives partied hard during the evenings to relieve the stress, but the screen versions simply work diligently without having a drink, and only have a party at the end of the ten weeks of training. Furthermore, the crews were given a night on the town before the carrier sailed, but their drunken escapades were also cut out from the film.

Spencer Tracy is surprisingly restrained, but Johnson shows real fear during the operation to amputate his leg.

It was filmed at the actual training ground of Doolittle’s Tokyo Raiders with 50 B-25’s and General Hap Arnold and Doolittle as advisers. The bombers were B-25Cs, which were slightly different models of the B-25Bs used during the raid. Since the carriers were all employed, MGM built sets for the carrier scenes and used the actual footage of the bombers taking off from the Hornet shot by director John Ford, which gives the movie an impressive realism. Oakland, California stood in unsuccessfully for Tokyo, and apparently the smoke rising up during the raid was produced by a real fire that happened to take place during filming.

The patriotic nature of the film did not infect all of the actors. Forced to live like enlisted men, they became bored, so they drank, fought and were insulted by the regular soldiers. In one serious brawl, it took three men to separate Robert Mitchum and a sergeant.

Although it is a bit corny when viewed today, the greatest compliment for the film is that the Raiders themselves were impressed with the film and considered it to be accurate.