Raiding England together will be a good team-building exercise.

The first season ended with Rollo’s (Clive Standen) betrayal of his brother Ragnar (Travis Fimmel), and alliance with Jarl Borg (Thorbjorn Harr) against Horik (Donal Logue), King of Denmark. The conflict is quickly resolved at the start of the second season. After a battle that ends in a draw, Ragnar convinces Horik and Borg to team up and raid England together, instead of fighting each other.

Rollo spends the rest of the season drinking and feeling sorry for himself. Hm, a lot of people died because Rollo had to work out jealousy issues with his brother.

It’s all about blood. 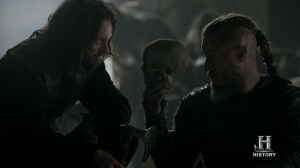 Showrunner Michael Hirst still does not know what to do with the monk Athelstan (George Blagden), who should be there to ask questions about the Viking lifestyle and to explain life in England, punctuated by comments from Floki (Gustaf Skarsgard) wondering why the Christians only have one god. Accompanying the raiders to England, the monk helps the Vikings find gold hidden in churches, and explains saints and miracles to Ragnar.

Clearly suffering from PTSD, Athelstan has a number of visions, which he naturally interprets as being supernatural in origin. Hirst seems to be implying that the visions experienced by many religious figures could simply be the side effect of traumatic experiences, which is an interesting perspective. Through the visions, the monk realizes that the ceremonies of both the Christians and the pagans emphasize blood, but the pagans are simply more honest about it.

For a while, it looked like the Athelstan was going to get some loving, which would be a much-deserved compensation for his torments, but sadly it was denied. 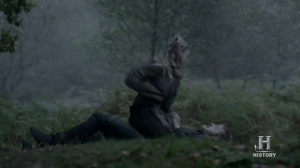 Vikings is told from the perspective of the norsemen, and viewers naturally sympathize with the protagonists. When the norsemen made their first few raids on England, they were hard men, taking monks as slaves, but Athlestan was the only one who survived for more than a few months. Since he finally becomes one of the Vikings, it basically legitimizes the norsemen. Slaves are constantly shown doing menial work, but the series treats them as background scenery, even though greater focus on the slaves would have exposed the nastier side of the Vikings.

Thorunn (Gaia Weiss), the sole slave who is given a name, is treated well. In fact, she is freed, as a favor to Ragnar’s son Bjorn (Alexander Ludwig), who has fallen in love with her. While it is nice that the pretty slave was freed, she did not seem to be treated like a slave. Sure, she served people during meals, but the girls at Hooters put up with worse (or so I have heard). No one forced her to have sex, and Bjorn courted her as if she was free. However, she has a cool Red Sonja vibe, since she makes Bjorn earn his happy time with her. 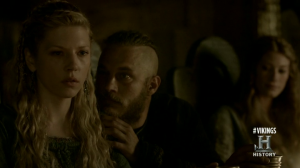 Although the show is called Vikings, it should really be called Ragnar’s Badass Adventures, since it is all about Ragnar. Travis Fimmel has really come into his stride, creating a spellbinding but unlikeable character, whose refusal to ever say what he is actually thinking understandably irritates every single person who has to deal with him. Like a proper alpha male, Ragnar is unwilling to choose between his wife Lagertha (Katheryn Winnick) and Princess Auslagg (Alyssa Sutherland), flirts openly with slave girls in front of his pregnant wife, and derives great pleasure from intimidating the English. But he is mesmerizing.

I understand why Hirst has made Ragnar the focus of the show. Fimmel has the most charisma I have seen since Andy Whitfield on Spartacus.

King Ecbert is a bit conflicted. 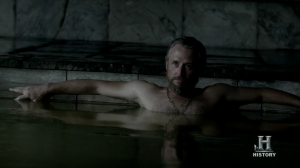 However, my favorite character this season is Ecbert (Linus Roache), King of Wessex, who claims that he simply wants peace but confesses that he wants to rule all of England. To be fair, he admits that he is a bit conflicted. Regardless of Egbert’s inability to focus on a single objective, anyone who holds meetings in a giant bath is cool.

Viewing the Church as an institution to be dealt with, but still under his authority, Ecbert does not seem to be the most religious man. Vikings is set in the middle of the Dark Ages, when the Anglo-Saxons of England were basically squatters in houses built by a more advanced people, the Romans. Only a few people, including Ecbert and Athelstan, know about the Romans because the Christians refuse to admit that the pagan Romans could have possessed superior knowledge. Instead, the priests claim that the houses were built by a race of giants, who no longer exist.

Horik is the worst plotter in the world. 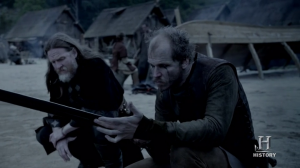 Ragnar wants peace and land in Wessex but Horik wants a fight and sabotages the negotiations in order to bring the Viking raiders back under his control. Giving up on peace, Ecbert invokes his alliance with King Aelle, ruler of Northumbria, whose daughter had married his son. Given the growing conflict between Ragnar and Horik, it should not come as a surprise that the Vikings finally suffer a major defeat.

Jealous of Ragnar’s growing power, Horik conspires against him, which ends pretty badly, largely because Horik is not a subtle plotter. Constantly pulling Floki off for intense, private conversations was probably not the best way to scheme against Ragnar, especially since he has already been betrayed before.

Poor Donal Logue. He has been playing conniving villains recently, but he is always killed off at the end of a season, although he was better on Copper. At least, he made it through an entire season of Gotham.

Don’t get me wrong, the show is fun. 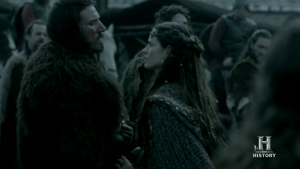 With a vegetarian sex-fiend, brother-murdering Mercian princess who inspects her warriors’ personal equipment in public, the show borders on camp, but the humor is a much-needed break from the relentless plotting, conspiring, blood feuds, massacres and brooding.

As ever, the Seer (John Kavanagh) is awesome, giving advice that no one understands, and telling long stories that drive Ragnar nuts. Since some of his predictions come true, it is hard to know if he does actually have visions or just tells people what they want to hear. I just wish that the show would explore more of the mythology of the two respective religions.

The soundtrack is evolving, creating an otherworldly atmosphere. Lengthy parts of episodes are filmed without dialogue, instead the music sets the mood.

The Vikings appear to be their own worst enemies. 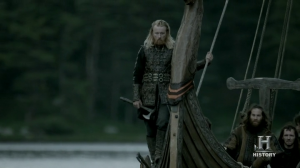 I understand that there was not enough land, which caused fighting over the limited resources. Only the tiny number of norsemen who had the good fortune to survive the endless bloodfeuds were able to raid England.

Ok, I get it, the Vikings were their own worst enemies, not the English. Enough.

Basically, Hirst is saying that Ragnar can’t play nice with any of the other Viking lords. He has a feud with Jarl Haraldson in the first season, okay. He avenges himself on Jarl Borg, even though Borg had real grievances, still, what he did had to be answered. Then Horik. The worst plotter in the world. The Jarl Lagertha married was too much of a drunk and a coward to even reach the level of attempting to betray Ragnar.

Apparently, aside from Ragnar, not a single Viking leader is trustworthy. It is a little overdone. This isn’t like Marlo on The Wire, whacking everyone because he is the alpha predator. It just seems sad and predictable. The real vikings were ruthless, or else they would not have raided abroad but the period has a lot of exploration and the clash between religions is interesting. In a way, the Vikings linked the Nordic countries, England and coastal Europe, mainly France.

It seems like Hirst is just settling for a crowd-pleasing version of the Sopranos with boats and beards.