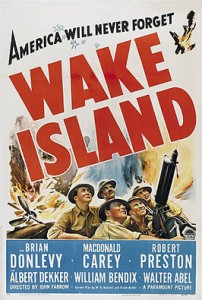 As relations between the United States and Japan declined steadily in the late 1930s, the American navy devoted more resources to the Pacific, and tiny Wake Island, located in the middle of the Pacific Ocean, was a key base. Aside from the garrison of 578 Marines, over a thousand construction workers had been hired to expand the base. Lacking enough troops, Commander Winfield Cunningham supplemented his force with 200 civilian recruits. Learning that the Japanese had attacked Pearl Harbor on December 7, Cunningham immediately placed the garrison on alert. However, Japanese bombers, mistakenly presumed to be American, destroyed most of the fighters on the ground at noon.

After three days of aerial bombing, the commander of the Japanese invasion force thought that the enemy would easily surrender when the fleet attacked the base on December 11. Aware that the guns on the Japanese ships out-ranged his own artillery, Major James Devereux lured the enemy ships into a trap, forcing the fleet to retreat. Choosing to besiege the garrison, the Japanese bombed the island every day, gradually wearing the men down. The garrison became famous as the Alamo of the Pacific, especially after a radio message appeared to contain the message “Send us more Japs.” However, a timid admiral cancelled a mission to relieve the garrison. The second attack took place in the middle of the night of December 23. Although the initial Japanese landing force took heavy casualties, daylight revealed twenty ships around the island, so Cunningham surrendered. The delay caused by the unexpected length of the defence of Wake caused the Japanese to postpone parts of their offensive, giving the U.S. time to recover.

Major Geoffrey Caton (Brian Donlevy), the new commander of the Marine battalion, arrives at Wake on the same flight with Shad McClosky (Albert Dekker), the owner of the company that is constructing the base, and the two men immediately butt heads. Concerned by the lax attitude on the base, Caton drills the garrison to prepare for a Japanese attack. Angry that his workers are already behind schedule, McClosky blows up when Caton makes the civilians take part in the air raid drills. Caton’s efforts to instill discipline among the garrison are hindered by two troublesome Marines, Privates Joe Doyle (Robert Preston) and Aloysius K. Randall (William Bendix). After news arrives of the Japanese attack at Pearl Harbor, McClosky is given the choice to leave on the Pan Am Clipper but he decides to stay, so Caton puts him in charge of digging shelters for the guns. When a Japanese invasion fleet appears, Caton forbids any gun crew to fire back until the enemy ships are at point blank range, and his strategy succeeds, sinking several ships and driving off the rest of the fleet. Japanese planes relentlessly bomb the island day after day but the defenders have become heroes in the United States. Finally, a second, more powerful Japanese fleet arrives, and the Marines prepare to fight to the last man.

The initial script for the movie was finished on December 22, 1941, before the garrison had surrendered. The screenwriters knew the basic outline of the situation but all of the participants were either dead or in Japanese captivity when the film started production, so they took a fair amount of artistic license with the story. Moreover, the film came out relatively early in the war, when the situation still seemed bleak for the United States, so it is understandable that none of the mistakes made by the real garrison appear in the movie. However, there is less exaggeration than would be expected, and the script is faithful to the overall chronology of the Battle of Wake Island.

Although based on real individuals, the characters are all fictional. Caton is based on Devereux, McClosky on Dan DeTeters and Commander Roberts (Walter Abel) on Cunningham. Commander Roberts is in charge of the island but dies of his wounds during the first attack, leaving Caton in charge, presumably because Donlevy, who played Caton, was a much bigger star than Abel.

When a special Japanese envoy stops off at Wake, there is a formal dinner, where he announces that he carries a message of peace, but none of the officers believe him. The real Japanese envoy did have a layover at Wake on his way to Washington but there was no formal dinner. Cunningham had not arrived, so Devereux and several other officers had drinks with the envoy in the Pan Am hotel. Married to an American, the envoy honestly hoped to achieve peace, but the Japanese military had already prepared for war.

While the presentation of the defeat of the first invasion fleet is accurate, the script does not mention that numerous civilians mistook the enemy fleet for the expected relief fleet from Pearl Harbor and gathered at the beaches with suitcases in hand, ready to be evacuated. A fleet of light cruisers, destroyers and troopships approaches the island, so Caton keeps the artillery and planes hidden to lure the enemy fleet within range of his artillery. The Japanese shell the island but Caton waits until they are in point-blank range, so the Marine batteries sink several ships. However, it seems strange that only one plane was launched as a scout. In reality, all four planes hit the fleet hard because the real garrison understood that it was important to sink as many of the enemy ships as possible. Although the depiction of the initial Japanese attack follows the historical record closely, the screenwriters added an additional threat to pump up the danger level. Another cruiser appears and remains out of range of the artillery, so pilot Lieutenant Bruce Cameron (Macdonald Carey) risks his life to sink the cruiser. Another alteration to the historical record is Caton’s decision to order his second-in-command to return by a PBY flying boat to Pearl Harbor to explain Japanese tactics, even though no member of the garrison was ever given the option of evacuation. Furthermore, having been bombed by hundreds of planes launched from six Japanese aircraft carriers, the admirals at Pearl Harbor already knew more than they wanted about Japanese tactics.

The garrison learns that another Japanese fleet is coming, but the real fleet took them by surprise. Despite heavy losses, the Japanese gradually wear down the Marines with greater numbers, and everyone fights to the last man. All of the previously-mentioned changes to the real battle are minor, but the decision to have the fictional garrison sacrifice itself has the unintended effect of making the real men appear to be cowards, since they did surrender.

Unlike McClosky, who spends every second on screen shouting, threatening or brawling, Dan Teters, the real civilian foreman, cooperated smoothly with the military from the beginning. While it is normal for a war-time film to paper over the Marines’ resentment against civilians who did not want to fight but were still fed, the refusal to mention the hundreds of civilian volunteers who supplemented the small Marine garrison is inexplicable.

Made with the active cooperation of the military, there are really, really a lot of explosions.

Filmed in California, the island seems much more ideal than the real place.

Despite the heroic portrayal of the garrison, the actual survivors called the movie fiction and were not impressed.

Wake Island was the first American film about Americans in WWII, so it set much of the tone for the many films that followed, as the studios pumped out a huge number of propaganda films of varying quality.

Having played sadistic Sergeant Markoff of the Foreign Legion in Beau Geste (1939) several years earlier, Donlevy has little difficulty with his role as a strict Marine commander, but the personality conflict between Caton and McClosky is boring. Although the squabbling Marines played by Preston and Randall are intended as comic relief, they are the closest to three-dimensional characters in the movie. Despite the interesting subject material, director John Farrow is simply competent, so it is a bland film.