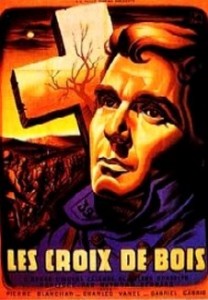 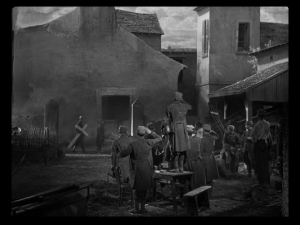 When war breaks out, men flock to enlist in the French army. New recruit Gilbert (Pierre Blanchard) joins a unit after the Battle of the Marne (September 7-12, 1914), when the soldiers think that the war is almost over. The unit rotates through periods at the front and periods of rest, which become increasingly shorter as the war continues. During one period in the trenches, both sides shell each other but nothing happens except one veteran is killed by friendly fire when returning from a night patrol. Later, they realize that the Germans are mining underneath their section of the line, but they are not permitted to abandon the position. After several days and nights listening to the digging, they are finally relieved and are marching home when they hear the explosion and have to march back to help plug the hole. Then, there will be one more push, which is promised to be the last one, but the battle lasts ten days. The exhausted survivors of a counterattack drag themselves back to the rear, ordered to march as if it was a victory, even though it does not feel like a victory. When the fighting is so bad that leaves are cancelled, the unit returns to the front. Gilbert is on guard duty, listening to a wounded man in No Man’s Land begging for water, until he is wounded and gradually bleeds to death. 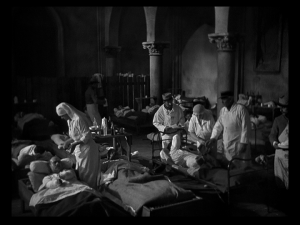 Aside from an early reference to the Battle of the Marne, which took place in September 1914, there is little sense of how much time has passed. One day, they are issued helmets, which occurred in 1916, and the major push that is supposed to end the war but lasts ten days is likely Nivelle’s offensive in 1917. Instead, the soldiers try to survive an endless cycle of tours on the front, rest periods behind the lines and far too rare periods of leave.

Part of the local cathedral has been taken over by the hospital, so the local residents hear the patients moan in pain during the service. Many of the patients have lost limbs.

One member of the unit returns from leave, and comments that everyone is interested in the war, but do not actually know many details.

The main battle lasts for roughly half of the movie and it is hard to watch. The endless artillery blasts got to me even though I was sitting at home in a comfy chair with a beer. After a lengthy wait during the preparatory shelling, the first wave charges, led by grenadiers (men with sacks of grenades, which they throw at enemy positions). While I have read about it in numerous books, this is the first time I have seen it in a film. 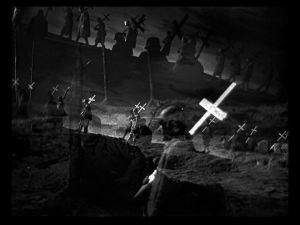 An unblinking portrayal of the lives of a unit of French infantrymen, the movie is not depressing, just grim.

Unsurprisingly for a war film, death is a constant presence in the film, which starts with a dissolve from soldiers on parade to an endless field of wooden crosses, and ends with a scene of dead soldiers marching into the sky, each holding a wooden cross. After joining the unit, Gilbert is persuaded to buy a round, and the grizzled veterans quickly get drunk but the party ends when a burial party with a corpse and a wooden cross pass by. Since they serve in the same section of the line, they can visit the graves of their comrades. During the massive battle, the unit finds itself defending a cemetery.

While each veteran has his own characteristic: the cook, the guy who is slow in the head, the dandy, the drunkard, there is little characterization. Like proper veterans, much of their time is spent grumbling. One soldier on guard duty wonders if they will ever see any action, but his partner simply complains about lice. Since they are French, their rations are soup, loaves of bread and some wine.

Unlike the American remake The Road To Glory (1936), there is no love triangle.

The sets are great, which should not be a surprise since the war was fought in France, and not long before the movie was made. 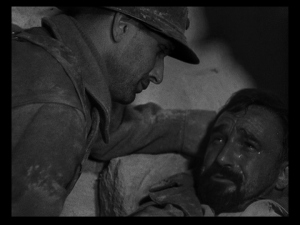 It certainly does not whitewash the soldiers’ pain and terror. At one point, several men are stuck in a crater and use a dead soldier as a parapet. Wounded men are in pain, they moan and they cry. Fatally wounded trying to fill canteens at an exposed well, the corporal tells Gilbert to find his wife and curse her for cheating on him.

Unfortunately, the film falters at the end. When he is badly wounded, Gilbert does a crappy job of showing pain, the corporal was much better. He is lying on a battlefield with other men screaming in agony, and it should have been a harsh scene that shatters any illusions about the glory of war, but it is merely boring. I was actually happy when he died because his performance was horrible.

The lack of dates and historical context is the film’s main weakness, preventing it from receiving four stars. Moreover, the mutiny that followed Nivelle’s failed offensive is not shown, perhaps it was too much for the French censors to accept.

I realize that a WWI movie in French with subtitles may not be everyone’s taste, but it is worth watching if only to see a part of the war that has received too little attention.