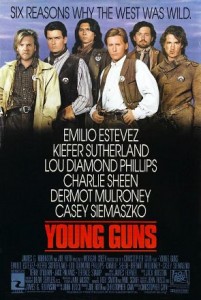 William Bonney (later known as Billy the Kid) became an orphan when he was fourteen years old. Left to fend for himself, he drifted into crime at an early age and was already wanted for murder when he arrived in Lincoln County, New Mexico in 1877. After riding with a group of rustlers for a period of time, he began working for John Tunstall, an English rancher and merchant who challenged the domination of the county by Lawrence Murphy and James Dolan. The two merchants took a dim view of any threat to the status quo, and the competion escalated until Tunstall was murdered in 1878 by members of the Dolan-Murphy faction. Tunstall’s partner, the lawyer Alex McSween, arranged for Tunstall’s ranch hands, who called themselves the Regulatiors, to be deputized in order to arrest the men suspected of Tunstall’s murder. The resulting conflict between the two factions became known as the Lincoln County War. The Regulators’ inability to take prisoners and the frequent gunfights in the town of Lincoln caused them to lose the public’s sympathy. When Dolan’s political connections ensured that the governor of New Mexico declared them to be outlaws, the Regulatiors’ days were numbered.

On the run for other crimes, William Bonney is taken in by John Tunstall, an Englishman, who owns a ranch in Lincoln County, New Mexico. Tunstall finds himself in conflict with Lawrence Murphy, the most powerful man in Lincoln County. Ignoring threats against his life, Tunstall continues to operate a store that competes with Murphy’s store. Preferring to have a monopoly, Murphy has Tunstall killed. Since the local sheriff is corrupt and beholden to Murphy, a judge deputizes Tunstall’s six ranch hands, including Bonney, and they begin arresting everyone connected to Tunstall’s murder. Bonney’s reckless nature leads to dangerous gunfights and when the gang’s violent methods attract too much attention, Murphy uses his political connections to have them declared outlaws.

The movie sticks to the basics of the story but makes Murphy Satanic and Tunstall a saint. It’s a clash of good and evil, not a war between rival cattle barons. Murphy is so evil, he took the daughter of a Chinese laundry owner as his mistress when they ruined his shirt. Tunstall recognizes the danger of opposing Murphy, but sticks around to take care of his boys, whom he is teaching to read. Murphy’s partner Dolan, who was actually the main force among the two of them, is ignored in the film. It is true that the town was divided into two factions that struggled for control. However, the leaders of both factions were motivated by greed, and they relied on violence and intimidation to improve their respective positions.

On a superficial level, the screenplay is faithful to the real events. Tunstall did die in mysterious circumstances and the members of Dolan’s posse were the obvious and only suspects. Although Brian Keith gives a very convincing portrayal of Buckshot Roberts and the scene follows the actual gunfight closely, the real Roberts was trying to leave Lincoln County and resisted arrest because he feared that he would be murdered (with good reason given the number of men who had been killed by the Regulators while trying to escape). Like the movie, the genuine Sheriff Brady was killed in an ambush, but it was a pre-emptive strike to prevent him from arresting McSween and then looking the other way while he was killed by Dolan. The real Regulators were beseiged in McSween’s house for five days, and there were roughly sixty men, not a handful of Regulators. The screen Regulators are drawn into a war with Murphy because of Billy’s psycho killing, and several of Dolan’s supporters died while trying to escape but in the movie all the blame is placed on Billy. The romance between Scurlock and Murphy’s concubine would have been a surprise to the real Scurlock, since he and Bowdre were both married to Hispanic women.

Some studio executive obviously thought that putting six young stars together would be a marketing coup, but probably did not bother to actually read anything about Billy the Kid. There were roughly a dozen Regulators during the Lincoln County War but that was trimmed down to six, apparently because no one could think of a dozen stock characters. Charlie Sheen plays Dick Brewer, the straight arrow foreman; Emilio Estevez is the rather psychotic Billy; Kiefer Sutherland plays Doc Scurlock, the poet; Casey Siemasko is Charlie Bowdre, the nice guy, Lou Diamond Philips is Jose Chavez y Chavez, the token ethnic, a Navajo; and Dermot Mulroney’s Steve Stephens is the obligatory racist, who constantly taunts Chaevez, although it is a pale imitation of the virulent racism that existed at the time. Lou Diamond Philips even commented that he had to speak in Spanish on a regular basis, otherwise people might forget that he is the ethnic character. All of the Regulators have their little specialty to help the audience remember who they are, Bowdre is a pugilist, Chavez throws knives, Dirty Stevens uses a shotgun, and Doc Scurlock carries a Sharps rifle.

One of my favorite scenes is when Chavez makes them drink peyote to decide their next move. They spend the night tripping while Sheen stays sober, wondering if the godless heathens will flip out and shoot him by mistake. The tension between real-life brothers Estevez and Sheen plays well on the screen but the actual Billy and Brewer were friends. I just wish that Brian Keith and Jack Palance had been given more screen time, they seemed to be straining at the leash during their scenes.

The Regulators stand around and bail out Billy whenever he goes crazy and starts killing people, which is surprisingly often, but his psycho attitude starts a war with Murphy. After a lot of bloodshed, the survivors go their separate ways but reunite in Young Guns II. Even though most of the real Regulators were adults, I was impressed by how the actors avoided portraying them as square-jawed, unflinching two-dimensional heroes. Instead, the boys are well, boys, who are torn between a desire for vengeance and a fear of death. It’s funny, they are good with guns, but they are not too smart and have a definite lack of common sense and patience. Billy is a thrill seeker but the rest of them are scared shitless, which I suspect is accurate, since Billy was the only Regulator who kept fighting, instead of trying settle down.

Writer/producer John Fusco clearly did a lot of research, but the result is a sanitized version of the Lincoln County War, where the vicious struggle for control of the county is replaced by the familiar story of a small band of outlaws fighting against a much larger group of evil-doers. In the end, it is a historically flexible, but entertaining movie with good acting and brisk action scenes.